February/ term 2 has been a busy month for Millburn house, and I’m sure this is the case for all other departments. However, a really exciting event that I have been waiting to attend and report back on, is the much-anticipated Alumni for Theatre and Performance evening which took place at Millburn house on Wednesday 27 February and was accompanied with wine, beer, snacks, and cake.

The flawless setting of the Alumni event was carefully decked out by the department technician, Ian O’Donoghue the man who is single-handedly responsible for 99.9% of anything technical in the entire drama dep. The event was facilitated by the wonderful Sarah Penny, Alumna turned Academic Engagement Administrator for the School, who gathered together Warwick’s impressive theatre alumni and diligently marketed the event to all theatre students. 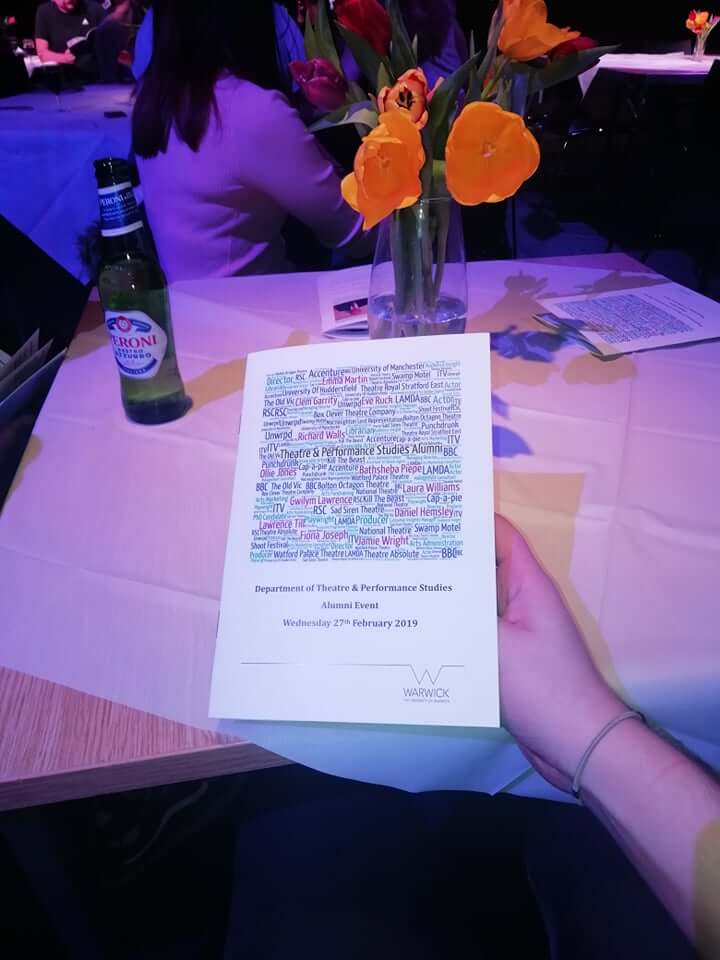 (Above, the program for the evening).

For me the day started with helping out in the interview room. For context, each of the Alumni were invited to an interview setting where they got the chance to offer advice to current and prospective students, give a little background into what they do now/ how they got there, and explain how the degree helped them in their career trajectory. For three interviews, I was boom lady, something which I didn’t realise was as taxing on the arms as it is. Still, I managed to do the alphabet backwards plus listen in to the valuable answers given by alumni. 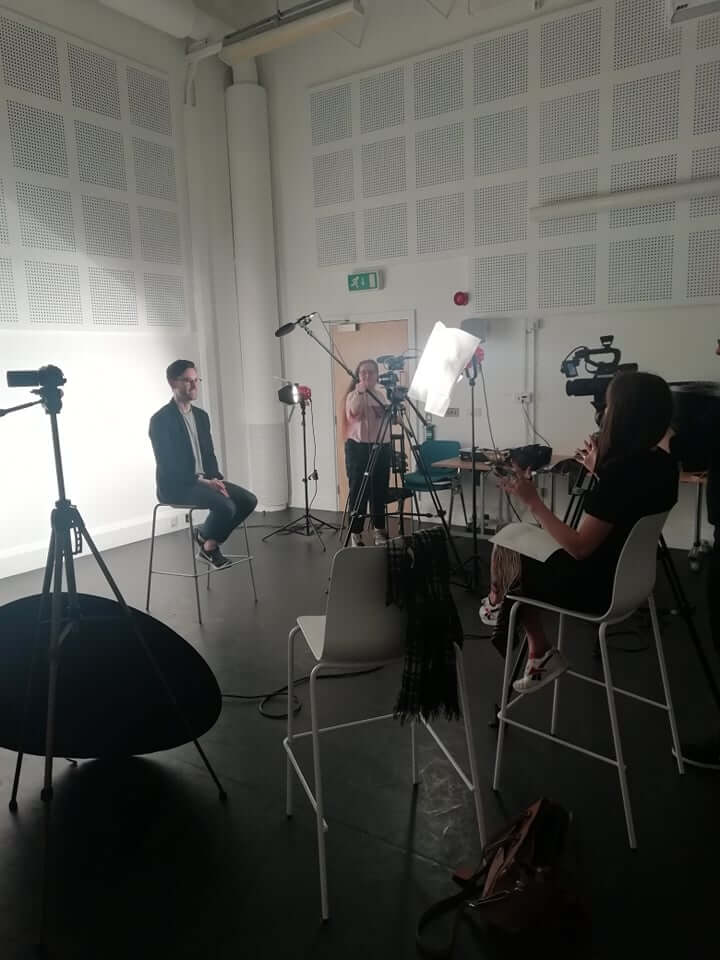 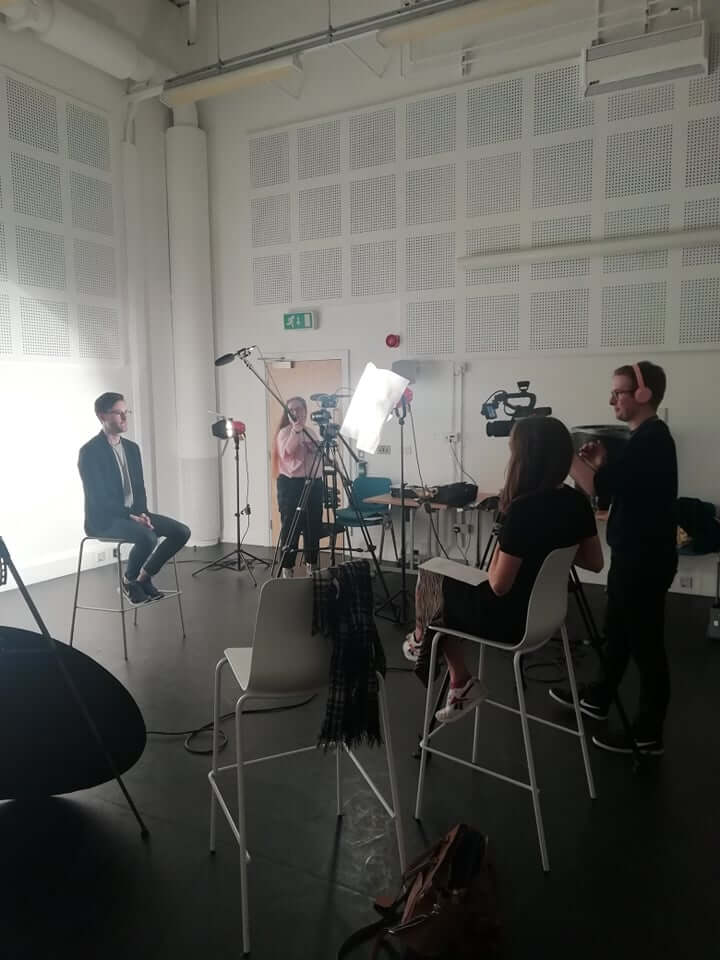 It was quite surreal and also so very reassuring to hear alumni stories which included post-graduation indecisiveness, patchwork careers, working odd-jobs, and seeking out and making opportunities for yourself, as it put some of my anxiety around my future to rest. It could be interpreted that the unknown of post-graduation life is daunting, overwhelming, and somewhat depressing, but hearing alumni talking about their experiences surrounding making ends meet, grabbing opportunities, being bold, and also realising that the degree has given them so much more confidence so that they are better equipped to sniff out opportunities honestly made me feel better.

Crucially the underlying rhetoric was be tenacious, use your contacts and skills gathered from Warwick, and make your own opportunities; write your own theatre, write your own screenplay, ask producers/ directors to give you a chance, invite agents and other people in the creative industries to see your shows, submit work theatres and to people who inspire you, ask for conversations, follow up emails with meet-ups, be persistent, start at the bottom, keep going and keep chasing what makes you interested. These snippets of advice may be somewhat evident or arbitrary but for me, and most of my friends, yesterday was a really important reminder that we had come so far, onto this special course: from hundreds of applicants down to 40. We have far and more at our fingertips than we give ourselves credit for.

Also, the event was a really useful introduction to networking as I have never navigated an event similar to this one. I think it was essential to keep everything casual and friendly, and this was made a lot easy via Andy Lavender’s (head of department) introductory speech where he gave the alumni a chance to say their name, when they graduated, what they are doing now etc. He advised students to treat the event like speed dating, speak to as many people as you can and be ‘promiscuous’- this immediately eased any nerves or tension I had about approaching successful professionals, particularly when I’m just a lowly second year starting out and, to be honest, quite a lost lowly second year.

Still, I got a glass of wine, relaxed and myself and a group of friends spoke to Bathsheba Piepe, a graduate from Warwick, then a graduate from LAMDA, and is now working as an actor at the Royal Shakespeare Company, impressive doesn’t cut it. And, it was so fine, she was so helpful, human, and sensitive and she was where I genuinely hope and wish I will be at some point in the future. We spoke about drama school post-graduation, getting work, finding agents, and the RSC. The first thing that struck me was how easy it was to just have a chat and not put too put much expectation on myself being interesting or providing a valuable conversation. Instead, it was more important to listen, and let the most pressing instantaneous questions present themselves because the event wasn’t about me feeling inadequate, it was about me learning something, and I did.

Afterwards, I spoke with Fiona Joseph, who works as a Customer Insights Manager at the Old Vic, and she offered some great advice about doing a masters, and whether it right for me. She also was incredibly helpful in pointing out that after university it is so important to just take some time to think about what it really is that you learned, what was it specifically that you really enjoyed and lived for. Then the next step is to translate these answers into a profession. Fiona said it was so, so integral to yourself and your future that you sit with the uncomfortabiltiy of post-graduation life, and there is no shame in taking some time to work in a bar or café or in retail while you figure out what is you want and how you’re going to get there. I can so relate to the hype and frenzy of just grabbing the first thing that comes your way because you’re so caught up in the fear of looking like you haven’t achieved anything yet. Honestly this conversation alone was helpful enough to cover the entire evening, but good advice kept coming.

We then spoke to Lawrence Till, television director of Shameless and Silent Witness and Richard Wall, published playwright. Again, the conversations were so fruitful and also inspiring. Both Richard and Lawrence were extremely go-getting in the infancy of their careers, and hearing about successful creatives having the boldness to ask other professionals for a shot at something, or even as Lawrence told us he asked many professionals to come and see shows he directed at Warwick during his degree. So similarly they were both very proactive when undertaking their degrees and this did normalise the concept of asking for me. So often I find asking for opportunities grating and embarrassing, but accepting that meeting people, being friendly, and asking all combine to better your prospects as a professional working creative. Not only this but Richard highlighted the upcoming opportunity of Coventry City of Culture (something which I have written about previously), which would be an amazing platform for any theatre student looking to showcase work.

Ray Ryan, from the Physics and Maths Institute, and career consultant to Theatre, Performance & Cultural Policy Studies said ‘This is arguably the most glamorous Alumni event I have ever attended in my career…most of the time you would be lucky to get a glass of water…’ Ray was a useful point of contact in the evening as he was a senior member within Warwick careers who could help enhance the infrastructure of the system which would make it more beneficial to theatre students. Essentially one of the main requests from theatre students that became apparent throughout the evening was the need for more events similar to this one which allowed for networking, mingling and making connections within the creative field. As theatre students, I can generally say that most of the students who attended the evening were confident to at least start conversation, which in itself is an achievement, and therefore these kind of evenings would be extremely beneficial for all students, if they were more readily available. Of course it was also very convenient having Ray there in person as he could see how helpful these style events really are. Hopefully, now last night has instigated a drive to make more of these events happen.

Again, these are just some of the I had conversations had last night, I know that many other students had great experiences too. I am really grateful that the event happened, it certainly reinstalled a sense of pride in me in relation to the department and community I’m inextricably a part of. 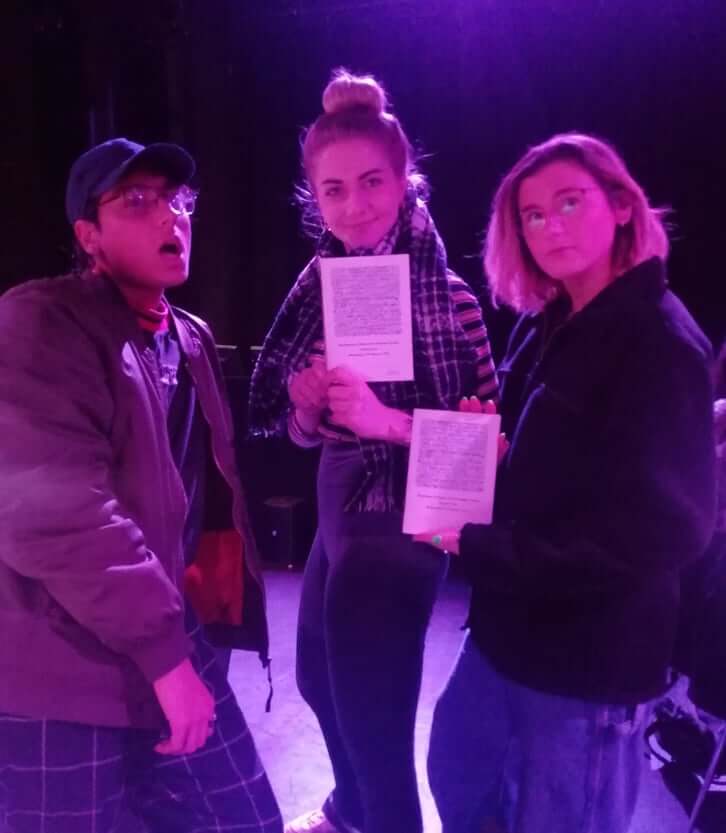 I hope this post gave you some insight into why Warwick theatre department is so special and popular- and if you are a theatre student here, some hope that post-graduation and job-seeking has been done by many people before us, and the success stories share a common theme: you get out what you put in.

Cheers, and until next month.