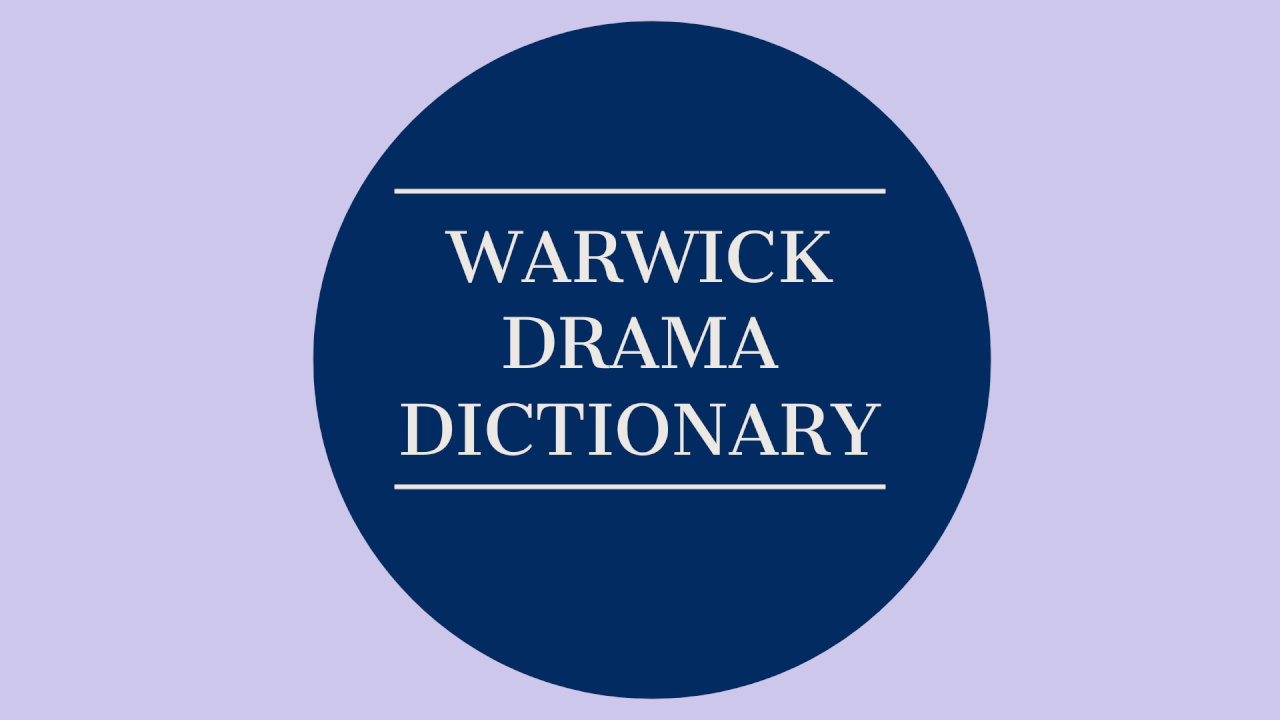 When I was first beginning to get involved in the drama societies at Warwick, I realised that there was a whole secret language to the drama societies made up of various letters and phrases that I had never heard before. Over time I of course learnt what these strange words and acronyms meant, and now saying things like ‘I need to finish my WUDS studio pack before panel in Westwood on Saturday’ is second nature, although even now I still come across the odd phrase I don’t know. I therefore decided to make a short Warwick Drama dictionary for anyone just getting involved in the societies to explain what some of the more common phrases mean.

Avon: The Avon building is a building in the middle of Westwood accommodation, and is a favourite spot for the drama societies. Upstairs in the building is a dedicated studio space where several performances and rehearsals have taken place. There are also a few larger rooms downstairs that are commonly used for rehearsals and auditions.

Bacchus: This is an event run by Codpiece society, sometimes with Freshblood New Writing, in the style of a more chilled open mic night. Anyone can come along and bring writing, performances, ideas or anything else they’ve been working on. It is a friendly, open space to talk about, develop and get feedback on ideas which can later be developed into something more.

Calltime: This website, created by the brother of a Warwick Drama alumni, is a relatively new addition to the drama societies, but has recently become the preferred way of arranging rehearsal times. Cast and crew members make an account, select their role, then select which times they are or aren’t free by changing the colour to red, orange or green.

DC: This stands for Drama Collective, the umbrella society that is in charge of some of the student shows in the Warwick Arts Centre. The Drama Collective also runs socials for everyone involved in Warwick Drama, and has previously run a Freshers bar crawl and the term 2 Drama Ball.

Doodle: This is a poll taking website often used by shows to arrange auditions and to book audiences. The website is simple to use, and people who want to audition or see a show simply follow the link and write their names down for the spot they want.

Fund show (aka fund): A fund show is a smaller budget show run by a society. These shows are usually given between £50 and £250 (depending on the society) to spend on whatever they need for the production. The shows go through a pack and panel process (see below) and are usually performed in smaller on-campus venues like the Humanities studio, Avon studio or Millburn. These are good opportunities for new production teams to learn about the process of putting on a show and get experience before moving on to larger scale productions.

Humanities (aka Hums): Humanities can refer to either the Humanities studio, where shows have often been rehearsed & performed, or the Humanities building, where many rehearsals have taken place. The Humanities block is located near the library and is fairly easy to get to and find your way around, although it’s worth giving yourself an extra 10 minutes the first time you visit.

IATL: This stands for the Institute for Advanced Teaching and Learning, and is an interdisciplinary department at Warwick. While IATL runs some interdisciplinary modules throughout the year that some people in the societies may take, in a Warwick Drama context it is relevant for two reasons: IATL is in charge of a few spaces often used for rehearsals and performances such as the Humanities studio; and some students have used IATL funding in the past to put on shows outside of societies.

Millburn: Millburn House is the current home of the theatre department, and is occasionally used by drama societies for rehearsals, meetings and performances. There are two studio spaces in the building, plus changing rooms and a seating area used for meetings or trying to fit in an hour of work between rehearsals and classes. The Capital room is also in Millburn, and is another space for rehearsals and the very occasional performance.

MTW: This stands for Musical Theatre Warwick, the musical theatre society. This incredibly active society puts on musicals, socials, workshops, and more throughout the year. For more information about MTW, and about the other drama societies, check out my previous post here.

Pack: A pack is a document submitted by production teams who want to put on a show. How the pack looks and what needs to be included in it varies from society to society, but in general they include the team, the directorial vision, the shows aesthetics and information on marketing. Pack submissions for society shows tend to open towards the middle of each term, so if you have a show you want to put on then keep an eye out for that!

Panel: When a team submits an idea for a show to a society, that society will often run a panel to decide whether or not the show will get put on. In a panel, a group of members from the society will ask questions to the production team about any concerns they may have or things they are less clear on. The members will then vote on what show will get put on. Although this sounds terrifying, most panels are actually quite friendly and relaxed.

PM: This is short for Productions Manager, and is one of the key roles in the drama societies. The Productions Manager is in charge of overseeing each society’s shows and assisting production teams in their work. Each society holds ‘exections’ each year to choose who will take on each role in the society, so if you’re interested in this role then keep an eye out for those in term 2!

Studio show (aka studio, studio slot): A studio show is a performance taking place in the black box studio space of the Warwick Arts Centre. These shows usually have more funding than other drama society shows and are therefore more ambitious and more sought after. For more information about the process of putting on a studio show, check out one of my previous blog posts here.

WAC: This is the abbreviation for the Warwick Arts Centre, the on-campus performing arts venue. The Arts Centre has often given a few slots in their performance venues to student societies to perform, as well as being a good space to watch shows. The Arts Centre cafe is also (unsurprisingly) located here, and last year became the preferred meeting space for those involved in the drama societies.

Westwood: This accommodation complex near the Cannon Park tescos is a much-used space for the drama societies. The Westwood music rooms are good dedicated spaces for rehearsals, Westwood cafe is a common meeting & eating space for people between classes in Millburn or rehearsals in Westwood, and there is also the Avon studio where a few shows have been performed. Like with Humanities, it is definitely worth giving yourself some extra time to find your way on the first visit to Westwood, as it can be hard to navigate at first.

WUDS: This is short for the Warwick University Drama Society, one of the many drama societies at Warwick. WUDS mostly deals with scripted plays, as well as running workshops and socials for their members.