Warwick Crest: The meaning behind our coat of arms – OurWarwick 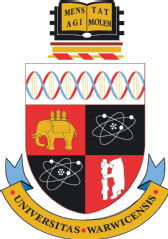 Warwick Crest: The meaning behind our coat of arms

Like most universities, Warwick has its own coat of arms and motto:

Since working with the knight school at my summer job in Sudeley Castle, I’ve learned a lot about crests and heraldry, so I thought it was about time I took a look at Warwick’s.

The bear and ragged staff has been a symbol of Warwickshire since the middle ages, and it’s first known use was in 1268, when the Beauchamps (beech-ums)became earls of Warwickshire. It has been used since then across Warwickshire, on coats of arms, signs, and as the crest of the county council.

The elephant on our crest is a symbol of Coventry, and carries the castle of Coventry on its back. Some theories are that the elephant is a symbol of strength, others that it is the enemy of dragons, and links to the legend that St George the dragonslayer hailed from Coventry. Whatever the case may be, the elephant can be found all over the city, from the FC’s logo to the bollards outside Cannon Park shopping centre by the uni!

The Isotopes and DNA:

These are representative of science, one of the university’s first and proudest subjects. Since opening in the 1960s, Warwick university has done excellent work in the field of science and technology, and with the medical school opening just under two decades ago, this is an area of pride which the university continues to uphold.

As a Latin student, the motto is of course the part of the crest that most interests me. Universitas Warwickensis  simply means ‘University of Warwick’, but the motto at the top is much more interesting. Mens Agitat Molem translates as ‘the mind moves matter’. Some have interpreted it as ‘mind over matter’, but I much prefer the similar (but slightly different) idea that it refers to the old saying of moving mountains: i.e that the mind is capable of even the most difficult of tasks.

So there you have it- hopefully you’ve learned something new! I know it’s not the usual kind of post, but I always think it’s good to know as much as you can about your uni… can’t hurt right?!