Claudia Lussana | Hispanic Studies Contact Claudia
Anything!
Find out more about me Contact Claudia
It goes without saying that for many literature lovers like myself, when thinking of all things Chilean, the figure of Pablo Neruda immediately springs to mind. With a free weekend, and not wanting to waste a second of it, the weekend before last, we decided to pay a visit to a place most loved by the maestro himself; Isla Negra. Isla Negra As well as being the origin of my mother’s favourite wine, the coastal area of Isla Negra in the El Quisco commune in central Chile, is perhaps better known for being the favourite residence of the Chilean poet Pablo Neruda. There he is! In fact, Isla Negra (which in fact despite its deceiving name is not an ‘isla’ (island) at all, rather a beautiful coastal region characterised by the dark outcrop of rocks which occupy the shoreline), was christened by Neruda himself whose house, la Casa de Isla Negra, has undoubtedly become the main focal point of the area and having heard so much about this hidden gem, was somewhere I wanted to see for myself. Casa de Isla Negra #NerudaHouseNumberTwo Again, Neruda not bad views, you really did know where to build your houses! Pablo and Matilde What a cutie #CrazyCatLadyAlert After a spot of lunch (meaning another empanada of course…they really are doing nothing for my waistline I can tell you) we took a quick bus to the seaside town of El Quisco itself before returning to Santiago that night. El Quisco You really never get tired of the views in Chile Despite the deceiving blue skies, the water was definitely not warm 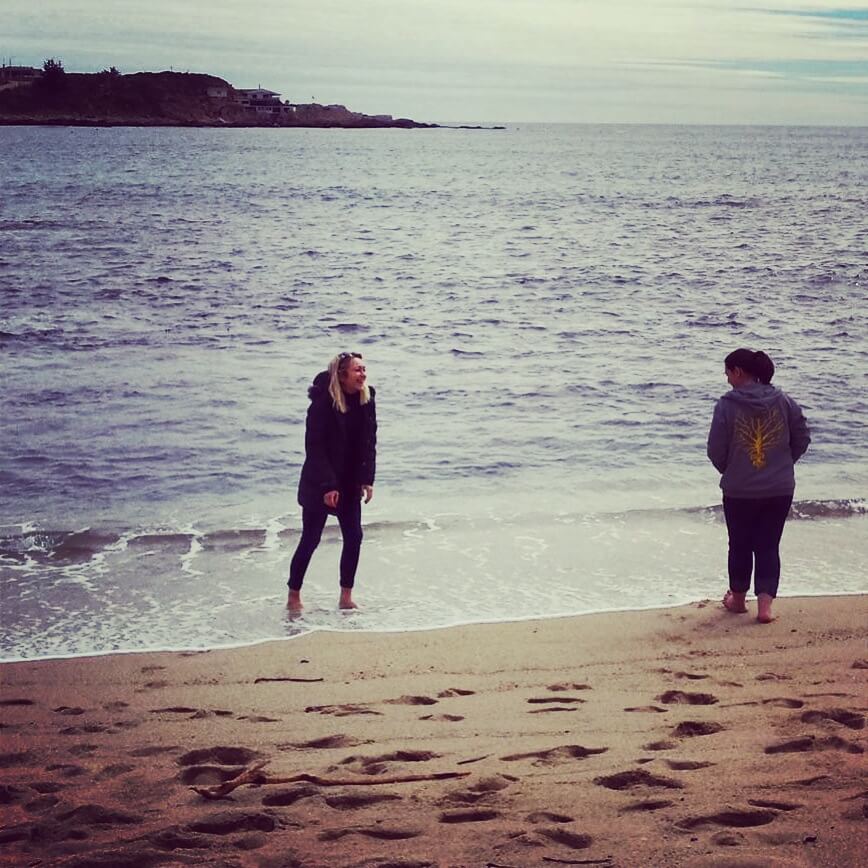 On Sunday having agreed not to venture further than central Chile that weekend, we decided to continue the Neruda theme that we had going for the weekend and pay a visit to his third house in Chile which in actual fact is right here in Santiago; just a ten minute walk from our home. Having previously only visited it from the outside as part of our ‘free walking tour’ back at the start of our stay in Chile, I was quite intrigued to see whether the eccentric interior of Neruda’s houses in Valparaiso and Isla Negra extended to his house in Santiago as well… …of course it did. Neruda definitely had an incredible ability to compile the most intriguing and curious collection of objects together and somehow make it work. La Chascona #NerudaHouseThreeOutOfThree With the sunshine and spring weather finally making an appearance in Santiago, my friend and I decided to spend the rest of the day walking around the city (as you do). In actual fact, I’m very glad we did, as what did we casually happen to bump into? La Procesión de la Virgen del Carmen… Bellas Artes Procesión de la Virgen del Carmen Feeling slightly confused and bewildered as to what was happening at first, we asked a man standing in front of us what was going on. It just so happens that for more than on hundred years, on the last Sunday of September, Chile celebrates the Catholic patron saint of Chile, The Virgin Lady of Mount Carmel as a conclusion of the Chilean Independence Day celebrations. La Virgen del Carmen With an outdoor service attended by thousands of parishioners and devotees, led by the Archbishop of Santiago which followed a spectacular procession involving members of the clergy to young children and joined in by the crowds of spectators singing and waving flags, before culminating in the arrival of la Virgen del Carmen, the sense of patriotism and excitement was overwhelming. My friend and I were even handed a flag to wave by an excited spectator as well as a service sheet and handful of prayers so that we could join in the celebrations. Quite an eventful weekend I would say for what we thought was going to be a relatively ‘quiet’ weekend at home!