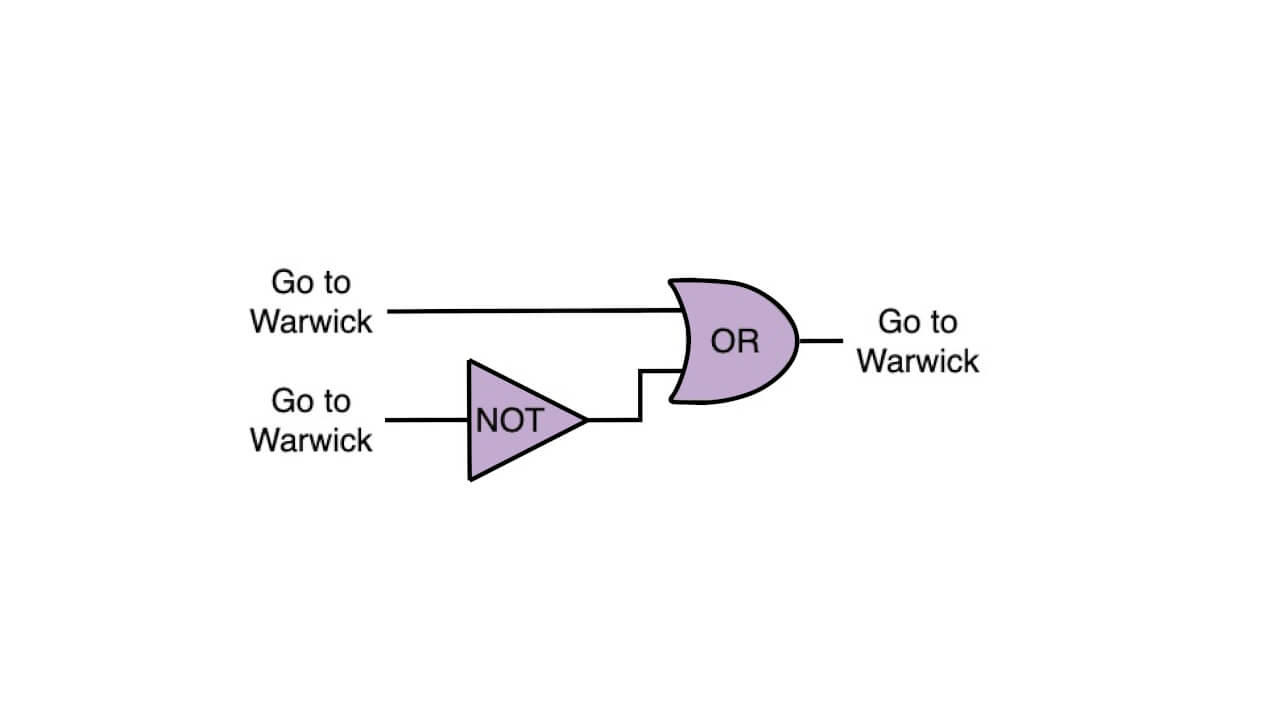 Here’s how I, a CS student, went about answering this question:

As you can see, it’s only logical 😉

By the way, in Part 1 of this post I talk about why I chose Warwick in general.

Not every Computer Science degree was born equal.

There are many flavours of CS, and in the end, it’s down to personal choice. I want to be able to bake a delicious, fluffy CS cake, and the course provided by DCS provides a good amount of theory to make some robust layers of sponge, held together with a generous spread of practical coursework between each layer.

And for that extra pizazz, I can show off my cake to prospective employers at the many career’s fairs, and the companies that sponsor our coursework.

(Can you tell that I’ve been watching Bake Off?)

Specialisation vs keeping options open. Once upon a time, when choosing my course, I thought I knew what I was interested in and what I wanted to do (oh, little did she know). As such, I was really drawn to courses that allowed me to specialise early on – even as early as first year!

But nooooooooo. Once I’d received my offers, I had a big think. What if my plans change? (SPOILER ALERT: they have). What if I ended up in a situation where I had closed too many doors too early?

That’s when I realised something profound: yes, there are some basic parts of CS that I like more than others – but they are all important. Especially the maths.

I won’t lie. I knew some modules would be painful, but I also knew that they would enable me to be really good at the things I found really exciting (AI, Computer Graphics etc.). I also discovered that there were a couple of things that I actually enjoyed but would have dismissed at first glance.

Therefore, something I really like about DCS is that there’s a lot of emphasis on covering all the ‘basics’ in the first and second years – this means mostly core modules, but with some room for optional modules. It is in third year that we get to choose pretty much all our modules.

Why is this important? I don’t need to worry about getting caught out by pre-requisites at all until third year.

Assessment. I was really drawn to the coursework:exam ratio, as I really prefer having coursework over exams. It means that I can spend more time completing work to a standard I’m happy with. The coursework we have throughout the year also reduces exam pressure.

For example, I absolutely loved doing the Visualisation module (100% coursework), because a) It was just a really fun and creative module, and b) I had fewer exams at the end of the year.

Interdisciplinary. DCS is actively involved in interdisciplinary research – between Computer Science, Maths and Statistics, Life Sciences etc. That means we, as students, are given the opportunity to learn and draw from other disciplines to complement what we learn in Computer Science. For example, there’s an exciting module in third year called Social Informatics that I’m really looking forward to!

I found that some CS courses in other universities are quite strict in sticking to their own discipline, and students don’t really get any chance to engage with any others. Therefore, I think it’s brilliant that we have the option to take modules in Economics, Business, Philosophy or even something ‘unusual’ like Design Thinking.

Links to Industry. At the end of the day, we go to uni to help us get a good job (*shocked gasp*). So, when choosing my university, I considered the sorts of companies the CS departments have links with.

Now, DCS does have a reputation for being closely linked with the big banks (which is true). For those who are interested in working in banks – seriously, you’ll be well-treated here. For those who are not too sure (like me), that’s fine as well!

As part of my Software Engineering module this year, we will be working with Deutsche Bank to develop software according to real requirements set by them – which means it could actually be used!

Plus, I’ve been to many CS careers events (in addition to university-wide careers fairs), which take place throughout the year. Along with banks such as Bank of America and Morgan Stanley, we get the chance to network with people from Google, IBM, Ford, etc.

I’ve written a post about what to consider during CS open days, still relevant to offer holders: