Way back in 2011, when I was in Year 10, my maths teacher announced a new project for our STEM club. We were going to build robots out of Lego, and compete against other schools. Sounded great, who doesn’t love robots?

It’s a little over four years since I first got involved with the FIRST Lego League. For my first three seasons, I was on one of the teams building the robots. In 2014, I was too old to compete, so I coached a team in the year below. This year, I volunteered as a referee at both the Coventry and Birmingham regional events.

I’ve had this volunteering planned since the summer, but the first time it felt real was when I took the bus to Coventry to help with building the mission models last. I’ve never visited Coventry University before, but I was impressed with the Engineering and Computer Science building – very striking from the outside, and equally nice on the inside. 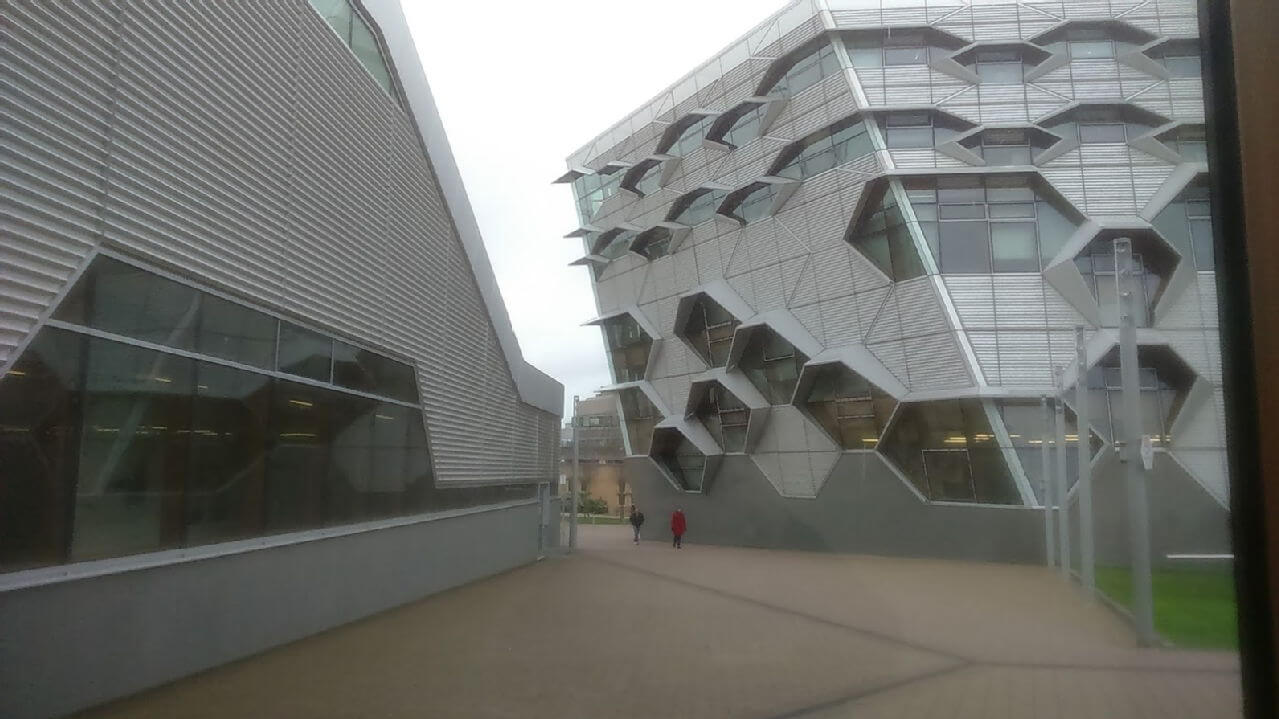 It was also my first real look at this year’s field. Basically, every year, FIRST design an obstacle course for Lego robots to navigate, based around a different theme each time. This year, the theme is called “Trash Trek” – everything is to do with waste and recycling. The mission models are built entirely from Lego, and they come with the instructions as a PDF. So, for a couple of hours one afternoon, I built some Lego with some engineering students, with festive Starbucks and cheesy Christmas music provided by Coventry University. 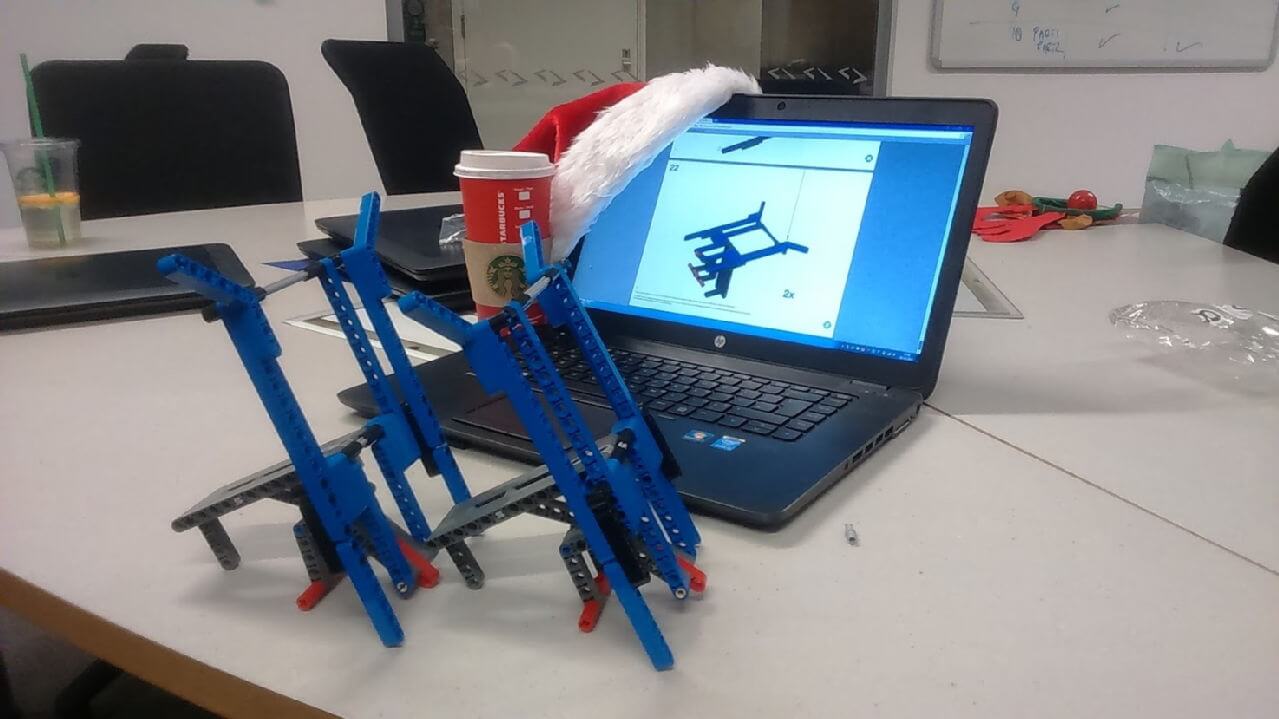 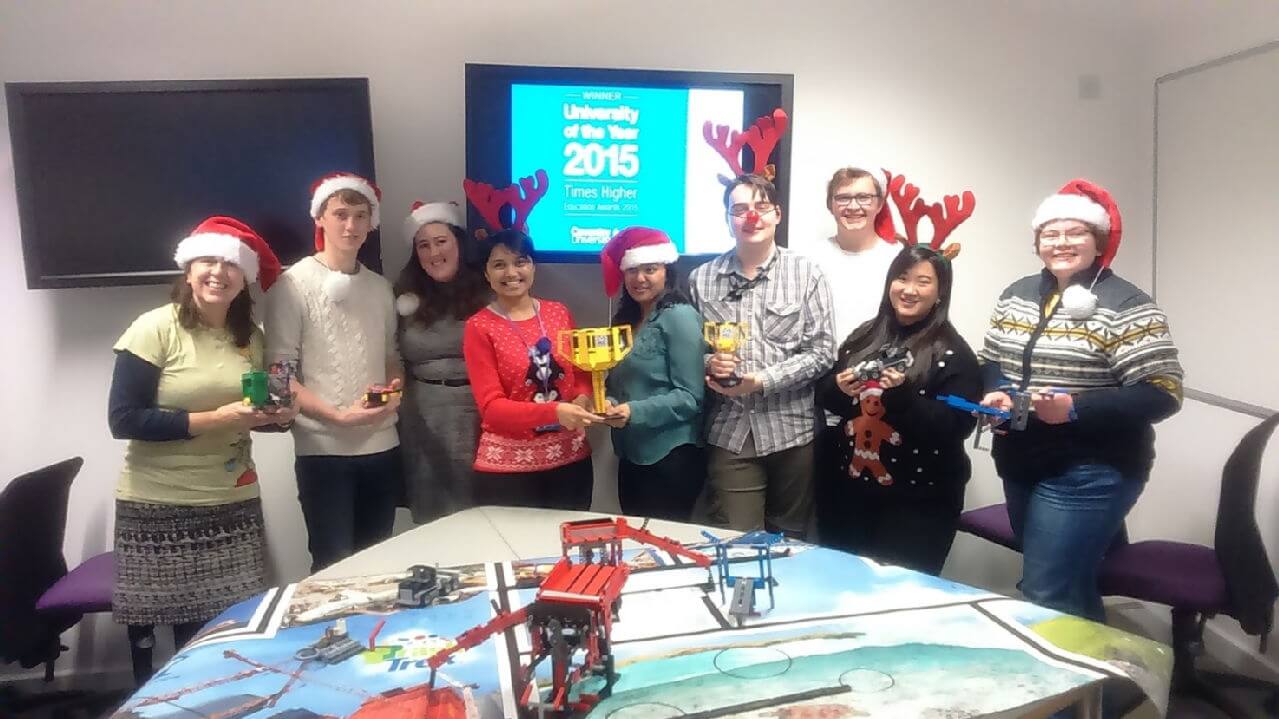 Skip forward a week, and I was on the train to Birmingham to stay overnight before the tournament over there. I also met up with a couple of friends from back home who study in Birmingham, Robert and Ryan. It was nearly Ryan’s birthday (coincidentally, I met him through robotics!), so the only logical way to celebrate was with silly gifts from the Tesco reduced section and fresher’s fair leftovers. He was thrilled, I’m sure. 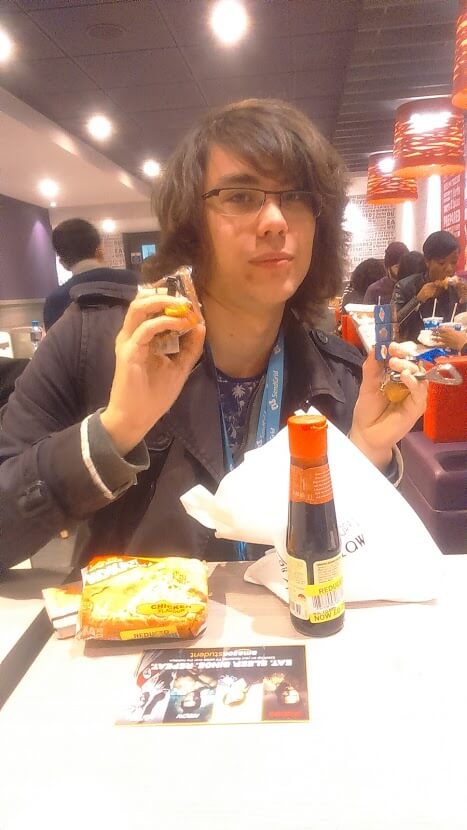 Next morning, I was up bright and early for my first day as a referee. The tables were set in the sports hall at Birmingham University, the briefing was done, and all we had to do was last minute checks and wait for the teams to arrive. 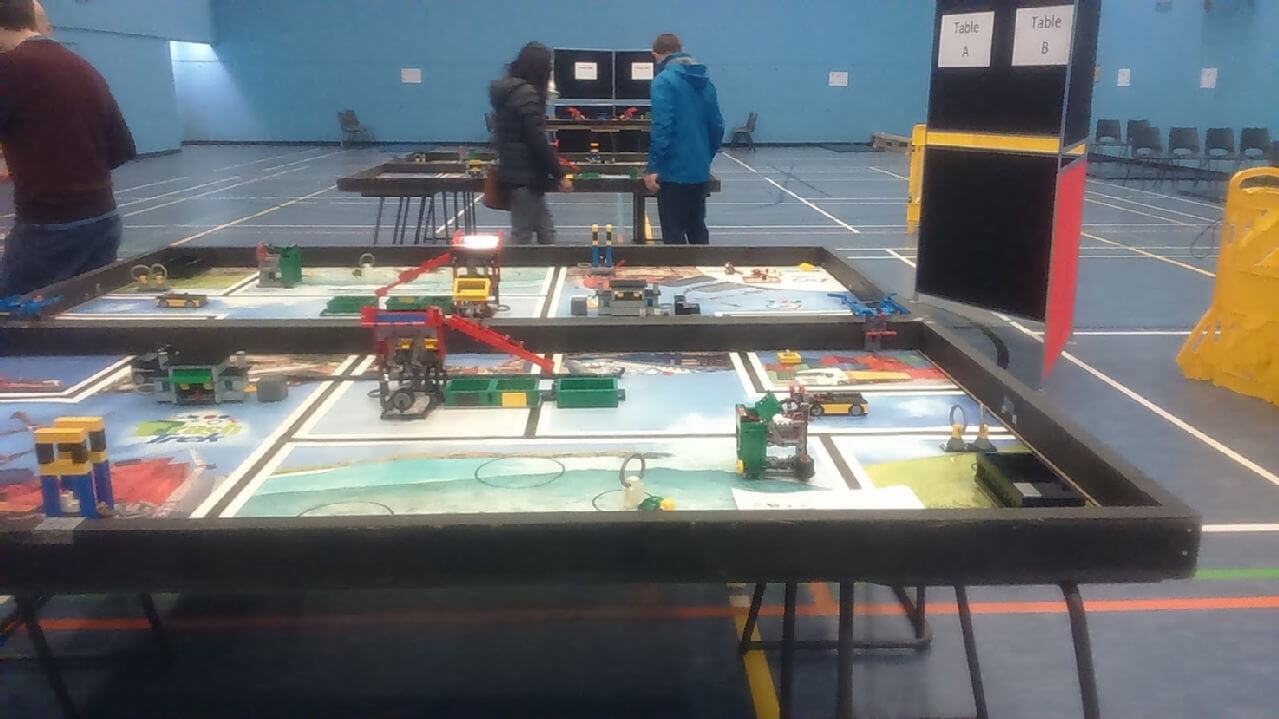 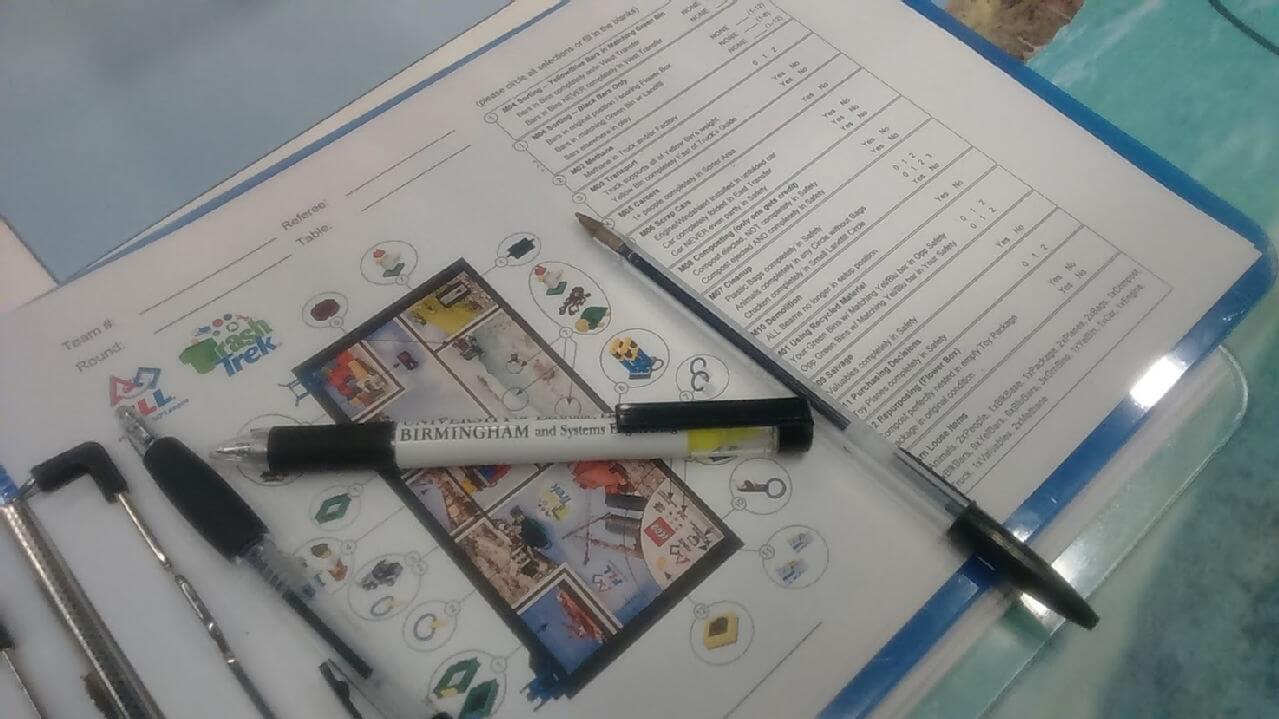 Matches are pretty fast-paced, and can be quite nerve-racking for the teams – they last just 2 and a half minutes, and there’s a lot to do in that time. Due to needing to pay attention when refereeing, I don’t have any photos of matches from this year, but in the 2012-2013 tournament, they took this photo of myself and a teammate during a match, in which the robot wasn’t doing what we expected it to. 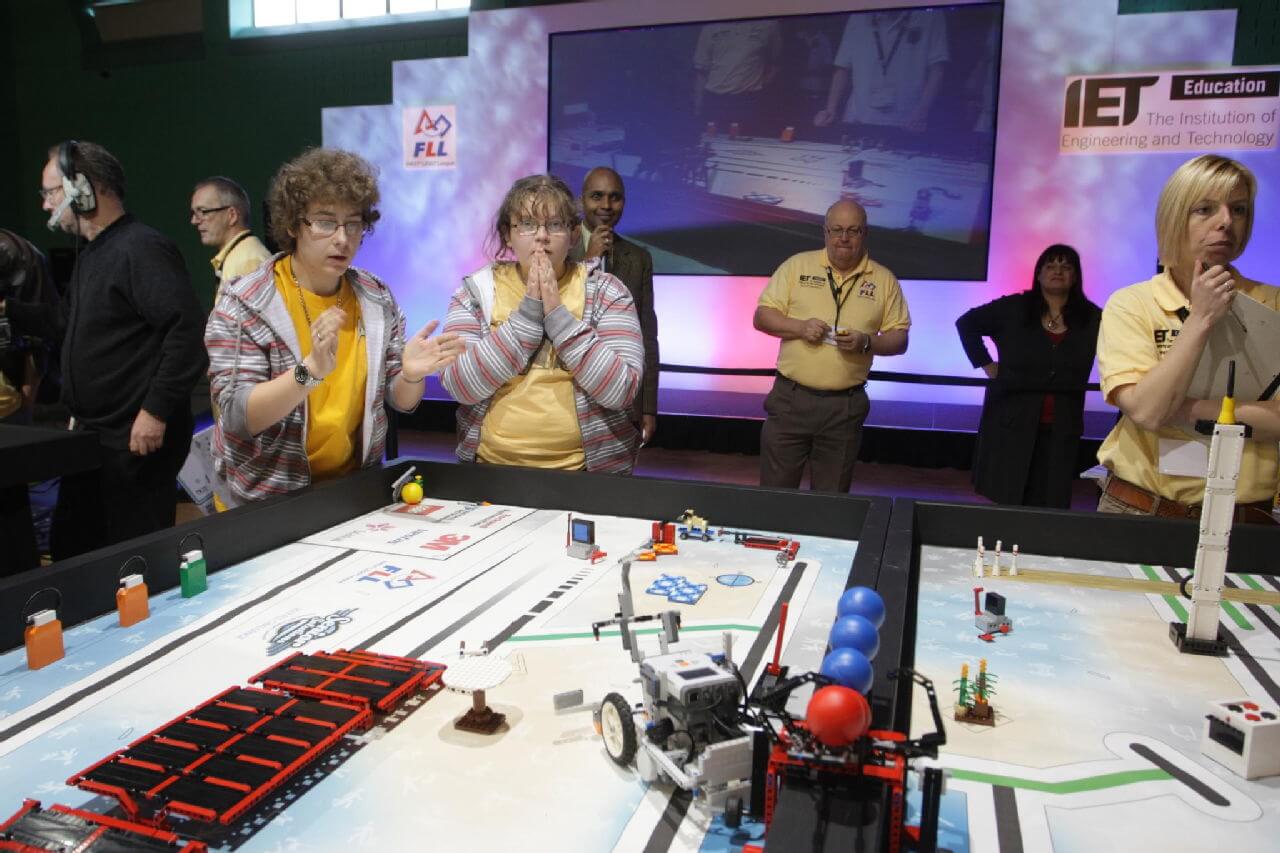 As well as the robot game, there are also project and core values categories – the project’s a bit like an EPQ to solve a waste problem as a team, and core values are all the skills that make things go smoothly, like cooperation and organisation. At the Coventry event, one team showed me how to make a carrier bag from a t-shirt as part of their project, inspired by the 5p plastic bag charge. I’ve also seen a lot of good core values at both events this year – encouraging teammates and opponents alike, and helping out when things go wrong. It’s the sense of community within FIRST Lego League that makes it fun, and I hope to keep being involved for many years to come.

The Coventry event had the robot game in a 360 degree lecture theatre, which is the best arena I’ve seen from a spectator’s point of view. Once again, I was refereeing, so I didn’t take any photos live, but it was a nice layout nonetheless. 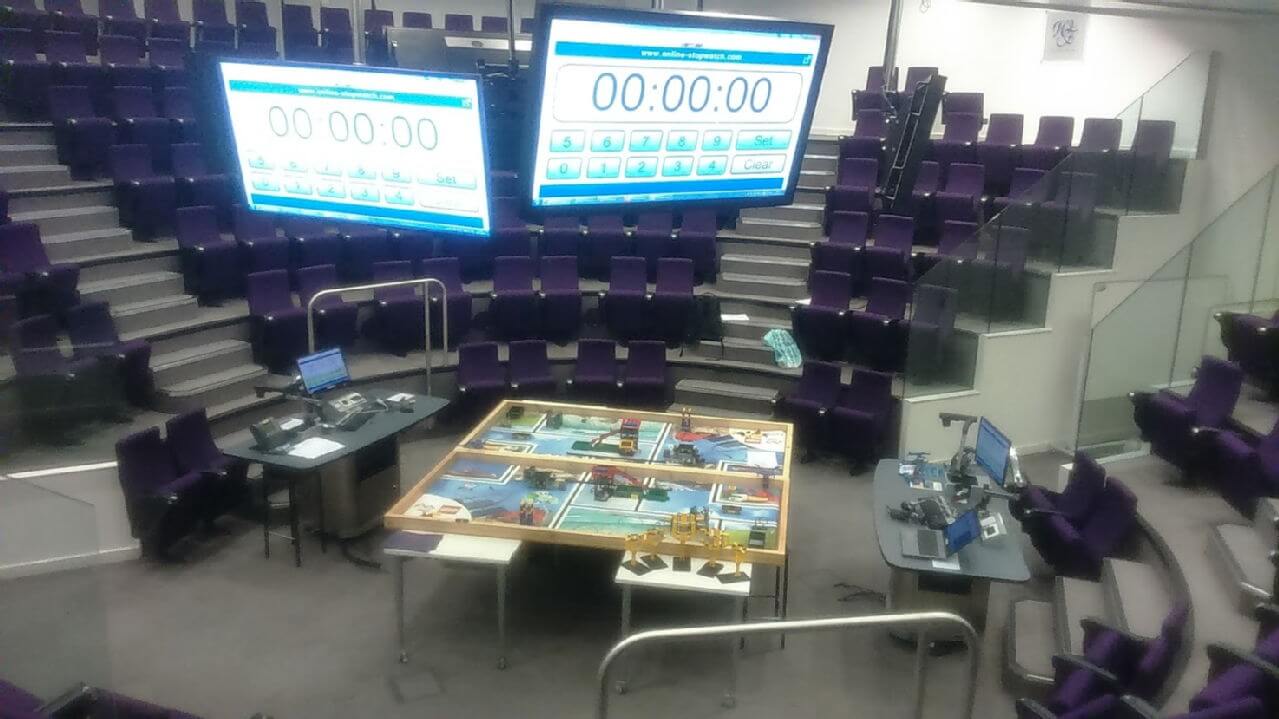 Of course, I can’t talk about FLL without talking about the trophies. Winning is definitely not everything in FLL, and the community spirit really makes it feel that way. The trophies are always made of Lego, which is pretty cool, I think. 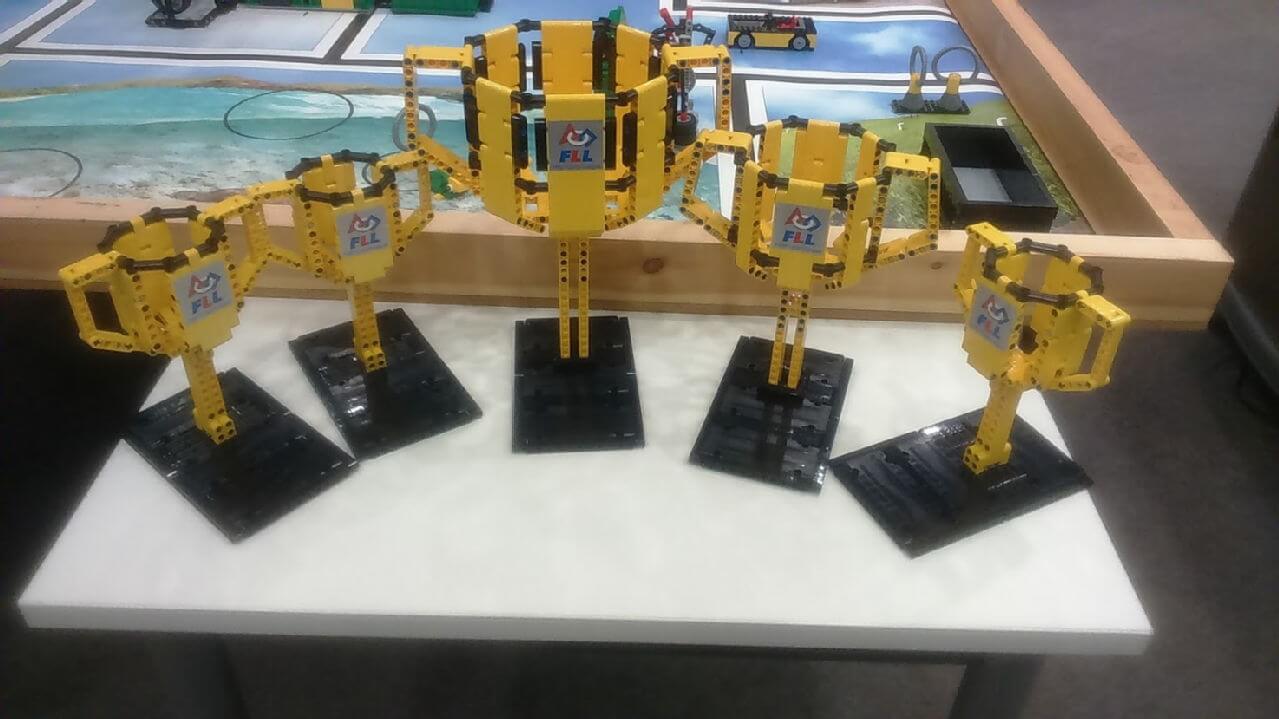 It can often feel like you’re in a bubble at Warwick, but there are plenty of things going on outside to get involved in, and with Coventry and Birmingham only a short journey away by bus or train, these sorts of events are really accessible. Even though I’ve moved from the other side of the country to be at Warwick, I still feel very connected to the community I got to know through FLL back home.