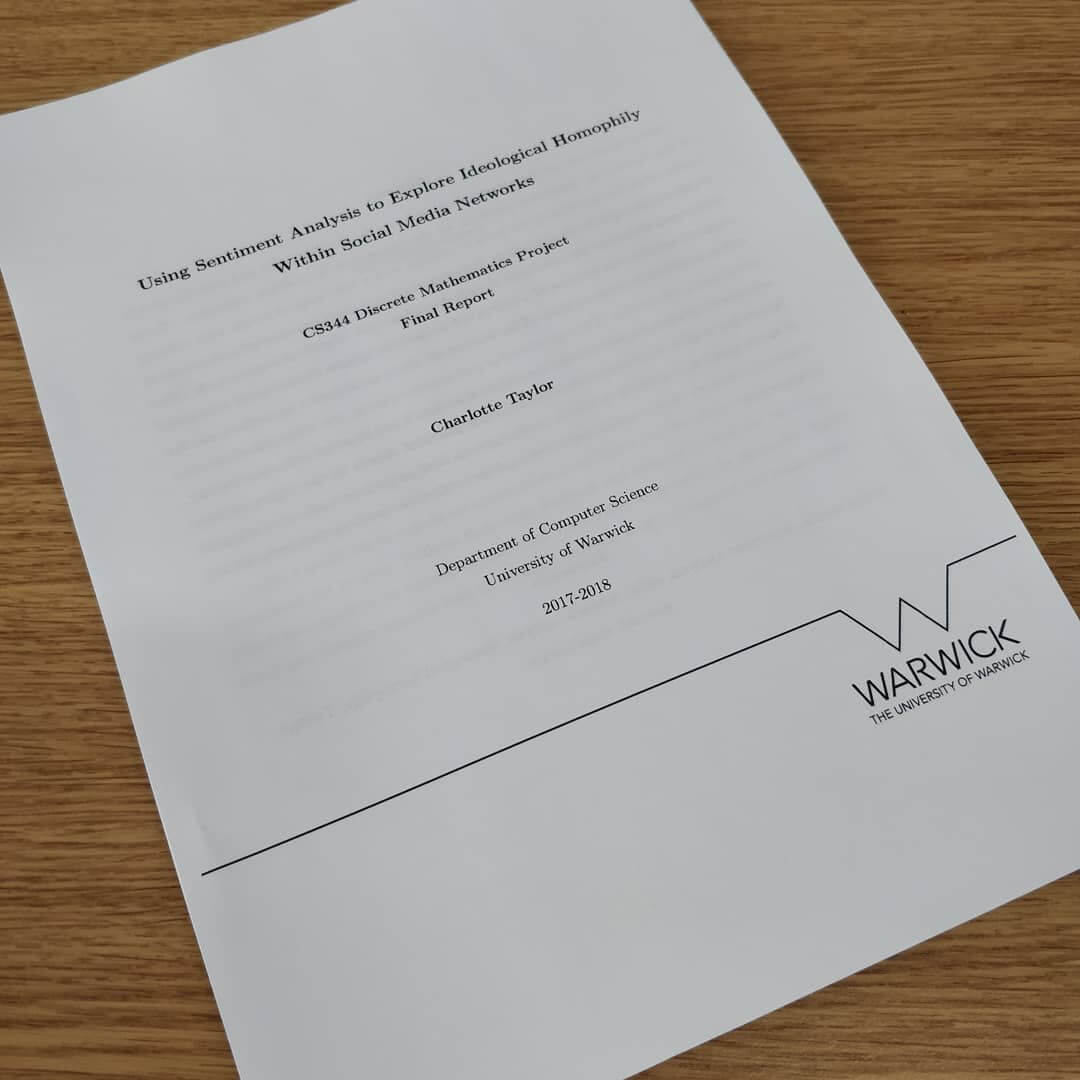 Once you’ve decided the topic of your final year project, you can now move onto the much more difficult task of actually doing something.

I spent a lot of last summer researching the field and trying to familiarise myself more with the broad field my project would be in- it’s good to get an understanding of the topic and the project early on so you can predict any issues you might face. While I had a really good understanding of the political and social background of my project, I didn’t do a huge amount of research on- for example- the Twitter API, which then led to me hitting quite a lot of issues when I tried to use it.

So over the summer before your final year, I’d definitely recommend doing some solid groundwork- maybe even laying out a plan for the year (which you won’t stick to, but, still, good to have). Speaking from experience, it’s a lot better to find potential issues early and work around them than finding them in the middle of term 2 and have to modify your project half-way through.

My project supervisor basically gave me free reign when it came to my project, meaning we only met a couple of times each term and he rarely asked for updates on my progress. This meant a huge amount of the motivation to get things done had to come entirely from myself. While this wasn’t ideal (I suck at self-motivation) it taught me a lot about hitting self-imposed deadlines, which is definitely a good skill to have and has even already helped me out during exams this year. The project itself is fundamentally a test of how well you can work independently without Tabula deadlines breathing down your neck and I definitely fell victim to putting off project work more than once. This was entirely my own doing, and lead to an extremely stressful end of term 2, when the project presentation date hit and my project was still far from functional.

Try and keep progress on the project consistent throughout the year would be my big piece of advice. My biggest downfall was that I’d have a couple of days where I’d progress significantly, then move on to other deadlines and commitments and forget about it for weeks at a time. This meant that a lot of the time, when I came back to the project I’d forgotten a lot of what I’d done, and wasted a lot of time revising what was already done before I could move on again. If I’d been more consistent, the amount of time needed to go over the completed work would have been much lower, and the project would have been able to progress much more smoothly.

The real mammoth task of the project though- the giving birth if you will- is the writing of the final report. For computer science projects, the guidance is 12-18,000 words and let me tell you, it cannot be crammed into the last days before the deadline (as much as my housemate was convinced otherwise).

I am an extraordinarily last-minute kind of person, so the real fear going into the project was that I’d leave the bulk of the work too late and not have time to finish it. However, a particularly intense couple of weeks towards the end of term two (the combination of the project presentation, tonnes of other deadlines, a weekend trip to Belgium and a somewhat questionable decision to go to week 10 Pop), finally gave me the kick I needed to realise that, while the work-to-the-last-second method has gotten me this far, it just really wasn’t going to cut it when it came to the report.

Because of this, I actually started the report at the beginning of the easter holidays, meaning I gave myself weeks of time (where I otherwise would have given myself days). This meant I had time to restructure the report, make sure it was how I wanted it to be and most importantly I managed to send a draft to my supervisor in advance. Seeing as your supervisor is likely to be one of the approximately 3 people who will ever read your report, and seeing as they’re the one who grades it, it’s important to communicate with them to make sure you know exactly what they’re expecting from you.

I know a lot of coursemates of mine who were doing more maths based projects wrote closer to 10000 words as that was all that was expected of them, while other friends who had more report-oriented supervisors wrote upwards of 30000 words (though I can assure you, they were anomalies).

Between communicating with your supervisor, giving yourself plenty of time to write the bulk of the report over easter, and handing a draft in as early as possible to get feedback, you can definitely do well in the report- especially if (as mentioned in the last blog) the report is something you’re interested in.

If you’re going into final year now and are starting to work on your final year project, best of luck! And I hope the advice is of some help! If you have any questions about the third year computer science project, or want to know more about what I did mine on, feel free to comment and ask!