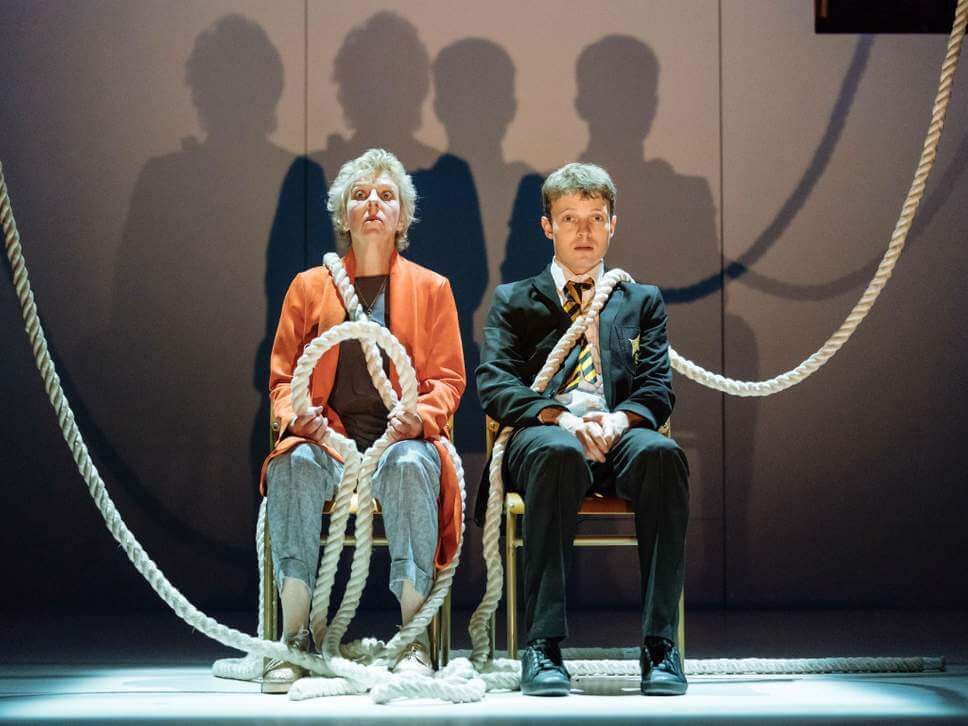 Since July I have been trying to re-immerse myself back into the theatre world by taking a trip to The Old Vic with my mother to see A Monster Calls, a novel written for children by Patrick Ness, from an original idea by Siobhan Dowd. The piece was devised by the company and directed by Sally Cookson. It was my first time at The Old Vic, notably because I just simply can’t afford to see many shows, so this really was a sought-after experience for me. I stumbled across this particular show on Facebook, as I follow the Old Vic Facebook page as an attempt to stay well acquainted with contemporary art. I always enjoy ensemble troupes as I love to see the creative shifting of scene, character, and mood at play, and all within the confines of collaborating human bodies. Out of every ensemble piece I’ve seen I have always had a moment of stunned appreciation as the company seamlessly interlink with almost transcending awareness of each other. Also, I quite fancied some time with my Mum, so we booked the tickets.

Not only this, but in the early afternoon Mum and I saw one of her old flat mates, a professional working actor, who now lives in Soho in the ideal location to magpie cheap tickets for popular theatre (if you’re willing to spare a morning embarking on strategic queueing outside the box office)- where the rewards can be great. I always find, despite studying theatre, I never quite know how to gage a performance, and I try not read too many reviews beforehand so as not to cloud my judgement, so I attended with an open mind.

The show had some shining moments of creativity which were really pleasing to watch. The ensemble would collude between being a part of Conor’s, the 13year old protagonist of the story, home and school life, injecting an authentic and charming domesticity to the play as it evoked relationships reminiscent in most young people’s lives. In this vein of the story we saw Conor struggle to cope with the grief of the impending passing of his mother who was tragically suffering from cancer. Conor was left to fend for himself at school where he was the recurring target of bullies, while also navigating a difficult relationship with his curt, yet witty, grandmother whom he struggled to warm to. These binding pressures instigated the arrival of the mysterious and omniscient yew tree who visits Conor in the dead of night to tell him classic fable folk stories which embalmed a prevalent lesson or message that probed Conor’s behaviour or beliefs toward and about his surrounding world. It was during the transitions of these two very different psyches that the ensemble stunned, particularly by utilising the set which had ropes hanging from the rigging which entangled actors and the yew tree to embody and exhibit the earthy roots and branches of the wise old tree. Actors would engage in aerial flips and clamber up the ropes as the old yew tree told his stories of apothecarists, princes, queens and priests. It was easy to become charmed, with childlike transfixion, as the yew tree spoke about his tales and conquests concluding with ambiguous characters and endings to demonstrate the ambivalence of life. In these moments where the ensemble actively supporting Conor’s world, whether it be by embodying a cupboard that held and handed him his cornflakes in the morning, to being his school teacher or bully or mother, to playing the role of a wronged queen the ensemble excelled in their pliability, something which truly bound the piece together. Although I struggled to fully embrace the storyline and particularly Conor’s character, I did find myself absorbed in specific moments of the play.

I am thrilled I went though, and I think that sometimes after a well-earned break from study and theatre and performing and writing it is nice to be able to reconnect with these passions again. Albeit it helps without the pressure of a mark or grade but with knowledge, opinions and experiences I’ve garnered with and from course-mates, lecturers, and seminar leaders over the past year that ultimately makes your appreciation, understanding and judgement of theatre so much greater and more confident. By no means am I any where near the knowledgeable person I wish to be, but with each year of the course I am broadening, deepening and changing my understanding of what I thought theatre was.