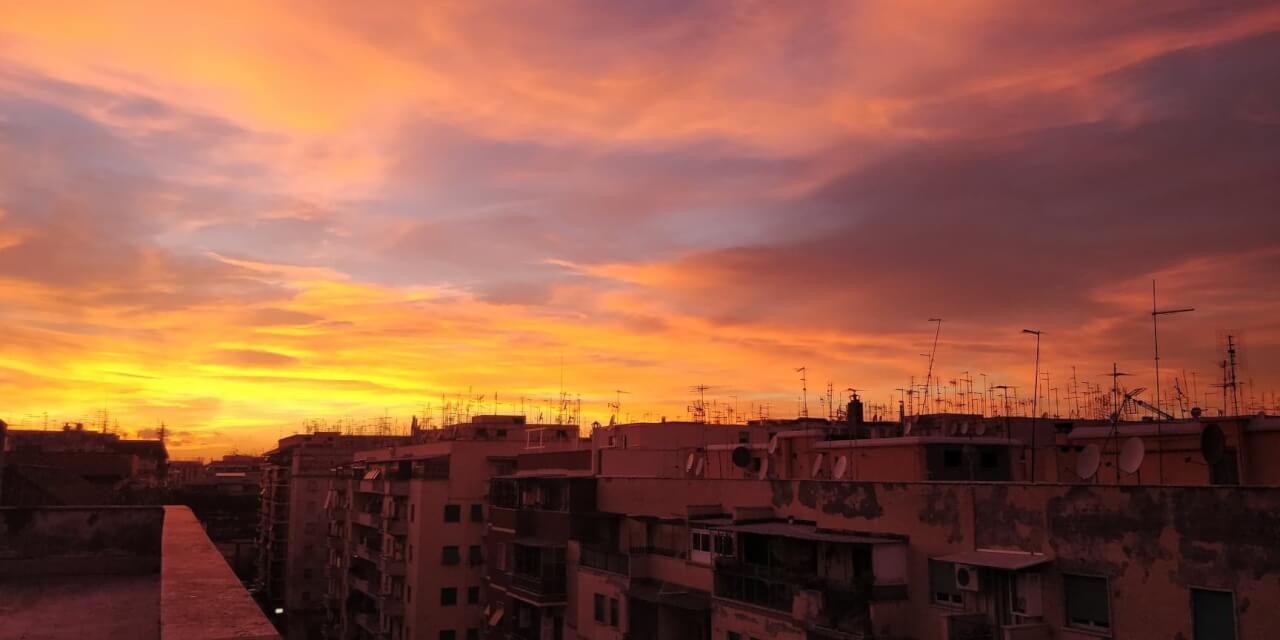 Almost three weeks ago I was booking a last minute trip home from Rome. I looked around my room, glanced at the empty suitcase waiting in the wardrobe, and something in the back of my head said pack it all. That something in my head had good sense; I didn’t know it then, but I wouldn’t be coming back.

The virus, although a growing concern at that point, was not what brought me back. However, it is what has made me stay. In some ways I’m glad I left without realising I wouldn’t be coming back. It made it hurt less.

The truth of the matter is, I love Rome. I love the city, the people, the museums. I love the coffee, the gelato, the winter sun through my balcony at three in the afternoon. It wasn’t just a hardy heather plant and a pair of boots that wouldn’t fit in my suitcase that I left behind. I left people I love, a culture I have become attuned to, and an experience that for me will be as eternal as the city I spent it in.

I count myself lucky that I left before the chaos began to reign, and while Rome was still thriving in all its beauty and atmosphere. Aside from the increase in mask-wearing and the lack of disinfectant on the shelves, the city still retained most of it’s bustling charm the day I got on the train to go to the airport.

The underlying feeling of unease I felt looking at my empty suitcase, however, has now swept the entire city, and it’s been hard enough for me to watch from home, let alone being there. Yesterday I watched the Pope walk through the empty streets and it broke my heart. Snapshots of familiar streets now frequented only by pigeons look alien to me. Snapchat maps is deserted, the familiar red glow around the Colosseum dulled to blue, and has since completely dissipated. The videos from the city show people singing and whistling from their windows just to feel like they aren’t the only ones left in the world.

The wonderful family who looked after me so well while I was in the city have been in contact almost every day. They haven’t left their flats since the 3rd of March. Couples are sleeping in separate rooms out of fear. Two days ago, the daughter had her 14th birthday, and could do nothing to celebrate. My friend in Sardinia is in despair- her graduation will be delayed again because the libraries are closed and she can’t get the books she needs to finish her thesis.

If you had told me this time last year that my year abroad would have ended so suddenly, and in such circumstances, I would never have believed you. It’s all so surreal, and to be honest I have been left in a bit of a shock. I will be spending the rest of my academic year at home writing essays as alternative assessment, and scrolling through the photos of my time abroad with what feels like extremely premature nostalgia.

I have been telling myself that it isn’t all negative. During my one full term abroad, I managed to fit in what many people would do in a year there. I went to all the major museums in the city, and a lot of the hidden gems. I walked the streets of Pompeii, climbed the hills of the Forum and took in every inch of the Colosseum.  I became a regular at two cafes, ate SO MUCH amazing food, and experienced city life for the first time, all while improving my language skills with every word out of my mouth.

The Italians are a strong and beautiful people, and I consider it a privilege that I got to spend so much time and experience so many things in their wonderful country. This isn’t the end of my relationship with Italy. They will bounce back, and when they do I will return with even more admiration and amazement than before.