Student Cooking, Inspired by 84 Seconds in 1979

I don’t think I’ve ever mentioned how much I like The Undertones. One of the first (and let’s face it, one of the only, what with the digitisation of everything) CDs I ever bought was their 1979 self-titled debut album. There’s one particular song on that’s relevant at the moment – "Here Comes the Summer". It’s not the most famous song on the album – that title almost hands down goes to "Teenage Kicks" – but it was possibly the shortest ever performance on Top of The Pops, at 84 seconds. And, much like the song, first year has gone by in the blink of an eye. Exams are over. The sun is shining/it’s chucking it down (delete as applicable). One by one, my flatmates are going home. Time is marching forward, and there’s nothing we can do about it. Here Comes the Summer.

I’ll probably talk about exams and all that at some later point. For now, though, I want to think about things other than exams. I really enjoy cooking, but it’s something I don’t much during exams due to timing. I end up bulk cooking and freezing and living on leftovers for a few days, which sounds dull, but if you get it right, you can make sure you have good food through exams, at a fraction of the cost of ready meals from Rootes Grocery Store. I’ve picked out a few of the more summery/interesting things I’ve made this exam season (alongside the usual fare of pasta bakes, casseroles and toast). 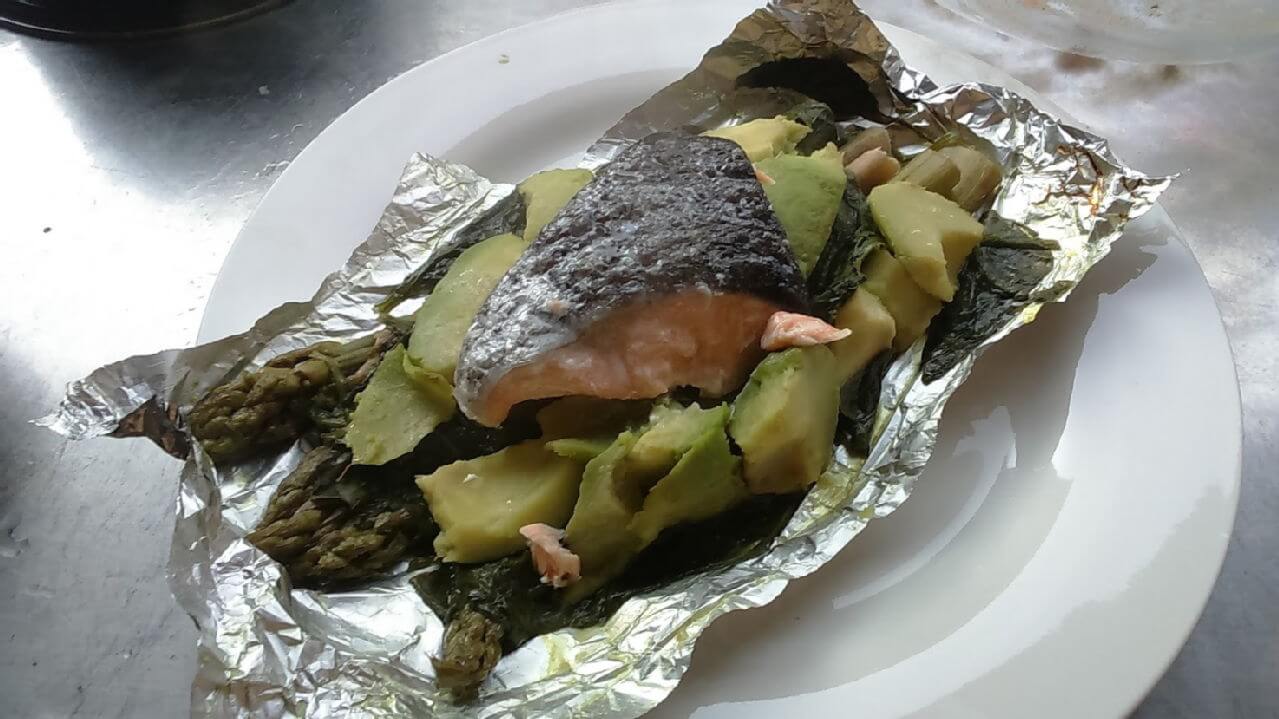 I ended up finding salmon reduced one day (just before closing on a Bank Holiday – it was 49p for four portions!), so I froze it and then made this with one of the portions. To make this, it was asparagus (also reduced to some ridiculously low price in Tesco), spinach (ditto – I think the whole bag was 6p?), and a chopped up avocado. After one of my exams, I’d been for a walk to Earlsdon, and happened across a greengrocer selling avocados at four for £1, and I love avocado, so I couldn’t really refuse. I don’t remember what the greengrocer was called, but it was somewhere.

Anyway, making it was pretty easy – I just put it all on tin foil, drizzled some oil and sprinkled some salt, then wrapped it up and baked it in the oven for a while, until everything was cooked through.

It was a bit too bitter for my tastes – the asparagus overpowered everything a little bit, and I think I’d cut back on it and add some rice if I did it again. 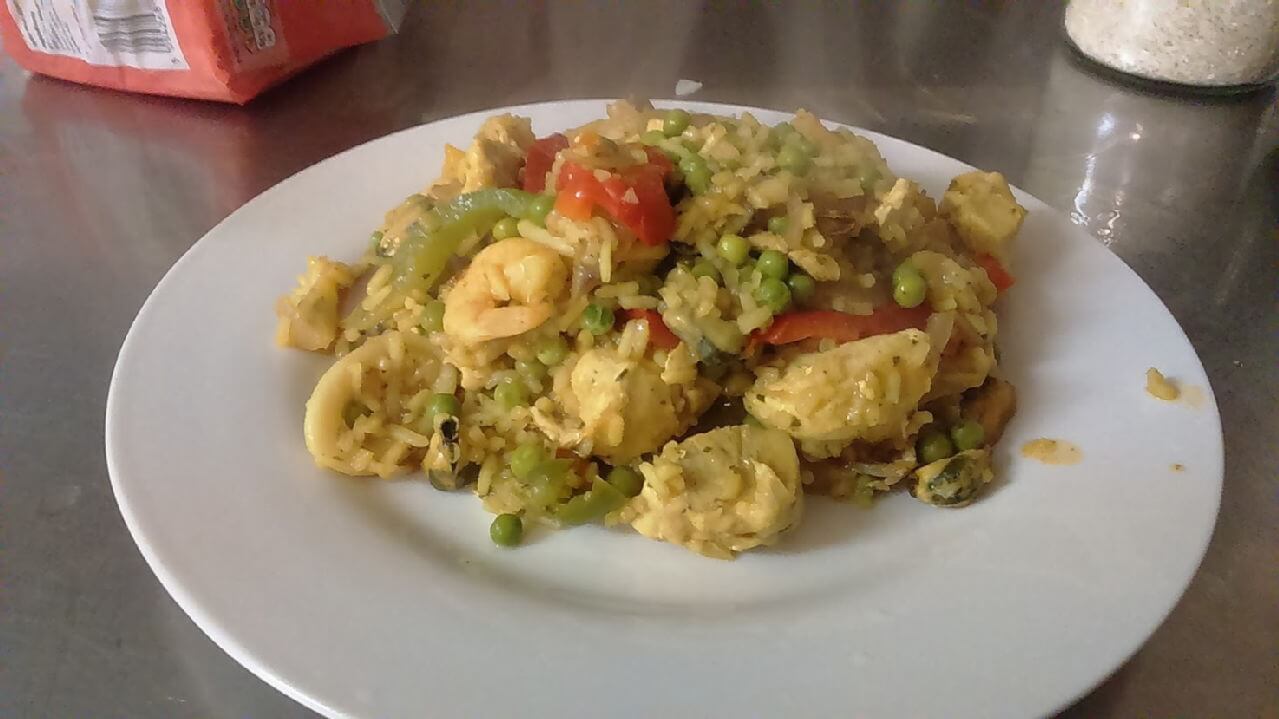 I’m a pretty lazy cook, so Schwartz dried packets of recipe mix are great. I’d bought some chicken super cheap (again, on a Bank Holiday – I paid 35p for a packet of diced chicken breast), and I had some ready-cooked seafood mix that I’d seen reduced a while back in the freezer, so I decided to combine the lot. I added some peppers, red onions, frozen peas and Everyday Value rice, and there was enough for three meals, with minimal effort. It’s all just a case of sticking it all in a frying pan, though I’m going to get hold of a non-stick one for next year, because washing a burnt-on steel pan is no fun. 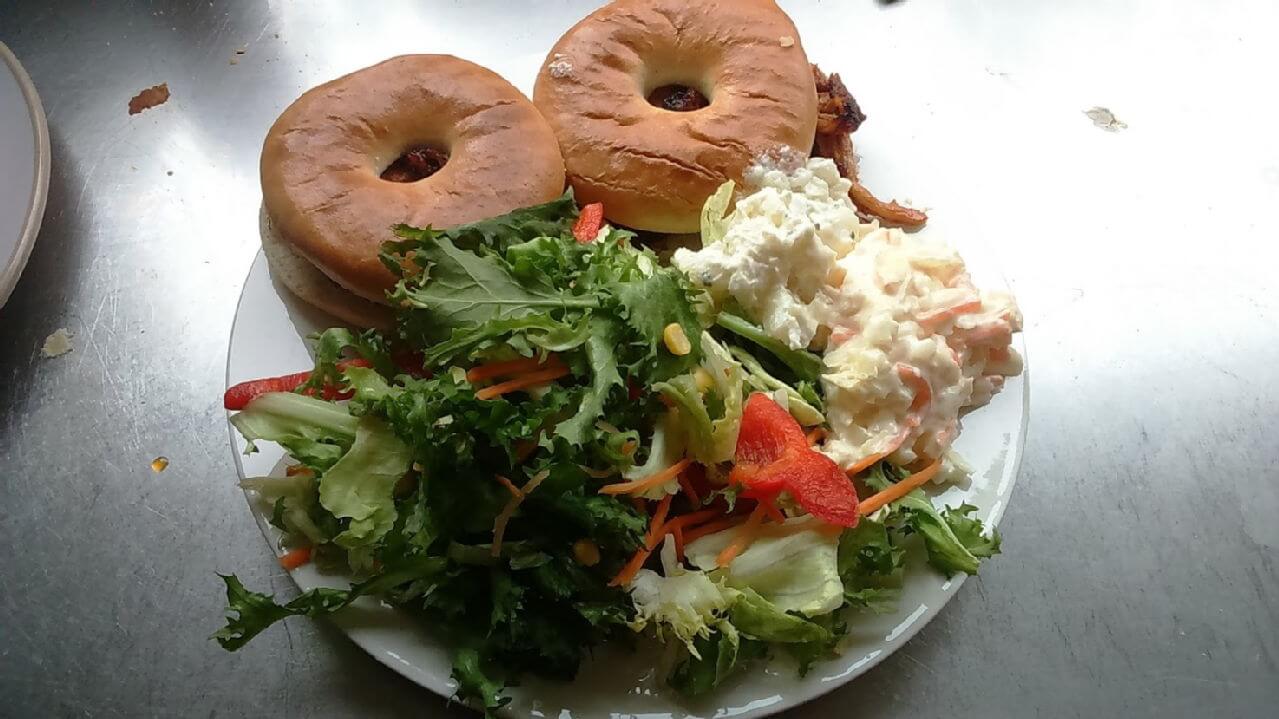 Pulled pork is one of my favourite things to make. It takes a long time, but if you’re planning to be in your flat revising all day/you’re holed up because it’s tipping it down, you’ll be around to check on it. I’ve made it a few times this year, and my favourite way to do it is with the boneless pre-packed pork shoulder from Tesco, but checking the reduced section for pork shoulder also turns up good results on the cheap sometimes. Again, my spices come from a Schwartz packet, because it’s convenient and I don’t think I’ll use enough of the individual components by the end of the year to justify buying everything separately. You mix up the barbecue sauce using white wine vinegar, cheap tomato ketchup and the sauce packet, then pour it over the joint of meat in a casserole dish with a lid. You then put it in a fan oven set pretty low (about 160°C) for a while. When you remember it, you turn it over and pour the sauce back over it with a ladle. Keep repeating that for a few hours, until you can pull it apart with a pair of forks.

In this case, I had some thin bagels in the freezer, so I toasted them under the grill, and put some of the pulled pork in them. I served it with coleslaw, potato salad, and a simple salad that I’d found reduced in Tesco. One pork shoulder made six or seven servings, so I put them in freezer bags and ate them over a week or so. 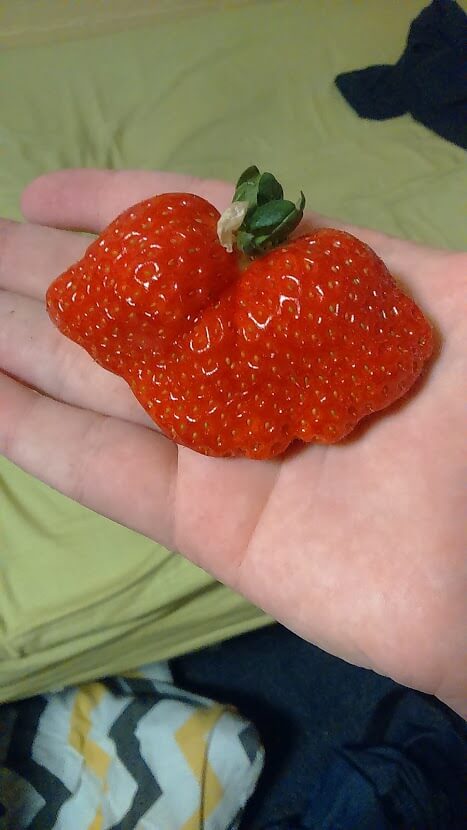 Obviously, not a recipe, but I love strawberries in the summer. Only one problem – they’re usually pretty expensive in Tesco! I recently noticed they’d started selling “Perfectly Imperfect” strawberries, which are all a little bit ugly to sell in normal packets, but they still taste great. Some of the strawberries you get are so tiny and adorable – but others aren’t, as seen above. They were 75p a few weeks ago, but have suddenly jumped up in price, which is annoying. Fortunately, nectarines are 69p at the moment, and they’re also pretty good…

(For the record, I’m surprised I haven’t mentioned my music tastes on here before. A question on Feargal Sharkey’s solo career came up at QuizSoc once, and I was the only one who’d heard of him. I got it wrong anyway, because I know his involvement in The Undertones, but not anything later. For shame.)