Reflecting on an exciting Term One – OurWarwick

Reflecting on an exciting Term One 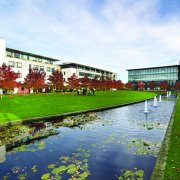 Happy New Year! I hope everyone had a restful and enjoyable break.

As Term Two draws closer, I thought I would write a blog post reflecting on my first term at Warwick as a second year student. Many aspects of university life were vastly different in Term One in 2021, in comparison to the previous year.

Firstly, and most notably, was the return to in person teaching – all four of my modules were taught in person, an exciting change from online learning due to the pandemic. It has been so engaging, and certainly in-person teaching makes it much easier to form connections and friendships with those in your seminar classes. Additionally, Term One was my first experience of studying optional modules – American Horror Story, 20th Century American Literature and Screenwriting – as well as my compulsory module, Composition and Creative Writing. I really enjoy all of my modules this year, and I’m further exploring my specific interests in both English Literature and Creative Writing through them.

In Term One, Warwick also held many in-person events on campus during Freshers Week. One of my favourites was the Societies Fair, where I had the opportunity to look around the many Warwick societies in Piazza, who were all eager to explain their societies and the fun events they had on offer.

To begin with, I was slightly nervous about getting involved with societies this year, as it was daunting that we hadn’t had the opportunity to do so before. But these fears soon melted away, as I joined societies and began to get involved. I had an amazing time in Term One in Documentary Society, meeting lots of like-minded documentary fans, watching and discussing documentaries and getting to know everyone. At the end of term, I became a member of the DocSoc exec, as Media Officer, and talked on RAW (Radio At Warwick) alongside the President, Amal, and Vice President, Athena, about DocSoc. This was an incredible experience, something which I am grateful for having the opportunity to do.

There has also been the excitement of moving into off-campus accommodation in second year, an experience which has certainly extended the skills of independence that I gained from living in halls in first year. Even something as small as catching the bus to campus, instead of living there, was a new experience that I had to factor into my routine when travelling to Warwick campus.

At first, it felt daunting to know that a lot of extra responsibility had been placed on myself and those who I live with in comparison to first year – for example, organising providers WiFi, gas, electric, water and other bills. But ultimately, I took comfort in the fact that this is something which many students do each year when they move out of campus accommodation, and soon enough it had been sorted.

Ultimately, Term One brought about many fun new experiences, and I found myself exploring Coventry and Leamington Spa more. But it also reinforced other things: my enjoyment of my degree, the sense of community that I always have felt at Warwick, and friendships which continue to grow.

I have made so many fun memories in Term One, and I can’t wait to continue making more next term.