First week back at Warwick and I am officially exhausted?! I must admit, it was a very strange feeling coming back after what has been the longest holiday I have had to date. In a way, it was almost like the first day of University all over again but 100 times less stressful! I’m not going to lie; I could have done nicely with another week, but I suppose I shouldn’t complain!! Four weeks does sound a lot, but by the time you have caught up with about a term’s worth of sleep, completed all your work for over Christmas, and spent time with friends and family, I definitely found that I needed it, especially after such an incredibly busy first term. Anyway, all rested, fed and watered (?) I have slotted back into the routine of University life and have even got my first 1 on an essay!! Ok I know it is only a 1 in first year but it’s still exciting 🙂

As you have probably already figured out by now, January is the time people generally start to get their housing sorted out for next year…scary stuff I know! Living on campus this year has been so convenient, in fact, thinking about next year, we probably all take it a little bit for granted really. Every day I seem to manage leaving for my classes and lectures later and later…in fact, more often than not I am finding myself darting across campus whilst continuously asking myself how I could have left it so late once again…I mean, everything is more or less under a 10 minute walk away!! The library, Warwick Arts Centre, Costcutter, the health centre, the gym, restaurants, the pub, coffee shops, the SU…it truly is a fantastic campus environment. In fact, as a bit of a gym fanatic, the convenience of the gym being just a five minute walk away is something I am going to particularly miss next year. In fact whilst on the subject, I should add that having been newly refurbished, and to a great standard, Warwick’s gym membership in my opinion is definitely worth the £190 for the year. This also includes access to all Warwick Sport and Climbing facilities. New Year’s resolution anyone?

Anyway, my point is, definitely make the most of the convenience of campus in your first year and possibly your last year (if you have just returned from a year abroad). Just being able to pop home between lectures for something to eat or to offload some books or pick something up is so handy. In fact sometimes it is easy to forget that there’s a whole real world outside of campus; a world that sees the likes of places such as Birmingham which I ventured to for the first time this weekend… 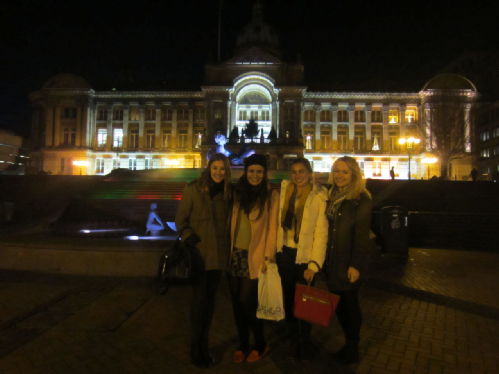 Only 20 minutes from Coventry by train, for anyone as obsessed with shopping as I am, Birmingham is definitely worth a visit and a great day out. Plus, there is some really interesting architecture… who would have thought it! However, don’t make the same mistake as us by getting on any train when in fact your ticket is only valid for Virgin trains, thus resulting in us getting kicked off the train despite our brilliant attempts of acting innocent and confused by frantically bursting out into a mixture of Spanish and Italian amongst ourselves…well it was worth a try!!

Yes, the prospect of moving out into this big wide world next year is certainly a little daunting. This period is renowned for being a bit stressful; for many it is a period of exams (luckily not for me), essay deadlines and on top of everything, housing. It really is the last thing you want to be thinking of right now but it has to be done at some point. Having finally worked out who I will be living with next year (something that was quite literally finalised this morning at approximately 1am), we can hopefully start to spend the next week or so looking for accommodation. Deciding who you are going to live with next year is not an easy task. After all, you need to think wisely. From general experience of halls this year and what I have gathered from many of my friends currently in their second years at other universities and consequently off campus, living with other people is never going to be easy; clashes and silly arguments are inevitable so it is important you choose people who you think you know well and are best suited to living with. A few pieces of advice a friend of mine in her third year at Warwick gave me at the start of the academic year regarding housing, was not to panic or rush into things and more importantly, to wait until January before deciding who to live with. It is amazing how the dynamics of a group and other circumstances can change a few months down the line and she proved to be very right!

In terms of the housing process though, you’re not completely left in the dark- don’t worry! This is a process Warwick Accommodation provides support with by holding housing fairs and by continuously updating the extensive list of new off-campus properties in Leamington, Coventry and Kenilworth online.

I will keep you updated, wish me luck house hunting!