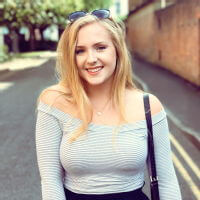 Hey everyone! It’s been a while since I’ve posted because I have been knee-deep in essay writing and my dissertation, which has also meant that I have practically been living in the library for the past two months. My last deadline is on Wednesday though and I actually think I’m going to burst, I’m that excited! Anyway, I thought because we are coming into the summer season and many first years will be starting in October, that I’d write a blog about the myths of university just to ease some worries that you might have:

like anything, university will be what you make of it. The best advice I can give you is that you have to put in what you want out of university. For some people, university will not be what you expect, in fact for most people university isn’t what you expect, in both good and bad ways. For me, I didn’t go clubbing that much in first year even though I expected it to be party city. The work is hard and you have to put in a lot of effort if you want to succeed not just academically but also socially. I had a lot of expectations before coming to university as do most students and I put an unnecessary amount of pressure on myself to have an amazing time. So the best thing for you freshers is to not expect too much, just throw yourself into university, into the social life and into your work and you’re more than likely to love it as much as I do now!

You will make your friends in the first week of freshers: this is definitely misleading! For some students this is of course true, whoever you live with or meet in first week, those people might become your closest friends until the end of university. For most people that I know, and for myself, the best friends that I’ve made are from the people that I met in second year or through my course and I’m still meeting people now who I have become really good friends with. So don’t worry if in the first week you feel like you haven’t found your people yet, by getting involved in societies, sports or just socialising, you’re more likely to find those people.

obviously I can only talk for sociology here when I say that the work load was definitely not as bad as I was expecting. For those of you who are planning on doing sociology at university, be prepared for a lot of jokes about your course because the work load is considered to be significantly less than other subjects haha but hey I’m not complaining. University has definitely been the stage in education where I have been challenged the most and where I have been required to do the most amount of work so I would recommend that when you start university, just try and stay organised. Sociology isn’t a walk in the park like most people will joke about because it is a lot of essay writing, which takes longer and the marking standards are higher than exams, plus you will study so many different modules that require various types of work and research. If you stay on topic of deadlines, revise well for exams and manage a balanced social life, the work will not be as daunting.

You have to enjoy clubbing and drinking: ok so university is definitely known for having a big party scene where you hear about crazy stories and sports clubs that are really into drinking. This is undoubtedly true. The clubbing scene is a big part of the university experience and is something that I personally love myself and would encourage anyone to give it a try. However, that isn’t just what uni is about and you definitely don’t have to like clubbing to enjoy uni. Like I said, I didn’t go crazy in my first year and found that there were lots of people who preferred to socialise differently. For me, my social life will never get any better than when I was at uni and not because of the clubbing, but because I have friends round for movie nights, to make food or just for a cuppa anytime in the week. I go out for meals, drinks, cinema, shopping, etc., literally the list is endless. Last week me and my flatmates went to Jephson Gardens in Leamington when it was sunny and sat with a few drinks and some food. There are also so many societies that organise events completely unrelated to clubbing so don’t feel like you have to be a party person or feel pressured to drink at uni. I would recommend trying it because you never experience the same night twice but if its not for you then that’s completely fine.

You can’t manage a part-time job: this is definitely a personal choice that varies between students. I know some people that work four/five times at week at a part-time job whilst balancing university work, no problem! I personally have worked throughout my entire university life, I obviously work as a blogger here for the uni, I have worked in a restaurant and now I’m working in retail. Don’t get me wrong, if you dedicate too much time to earning money then you can fall behind on uni work, which is not recommended but the majority of the time I have found it easy doing both. If you plan your time, if you are organised but also have a well-balanced social life, then a part-time job will definitely not impact on your university work.

You need to have a job lined up after uni: loads of students tend to apply for internships or graduate schemes that are promoted throughout the year on campus at job fairs and talks. University careers department are really encouraging and helpful in trying to guide students through the application process and land an excellent job. However, the competition for grad jobs is tough and most student leave university with absolutely no clue what to do. This isn’t a bad thing. If anything it is a good thing because you can take the time to think about what you might like to do as a career, or go and do a bit of travelling. Personally, I’ve got a summer job planned and then after that, the world is my oyster but also graduating from one of the top universities in the country will look great on your CV. Also definitely don’t worry about jobs in first year, I mean absolutely apply for internships if you see something you like but don’t be pressured by other students who have landed jobs with top companies because chances are, most of your friends are in the same boat as you are!

I hope this has helped and eased a few worries that some of you potential students might have had. University has been a rollarcoaster for me, I’ve had highs and lows but I can honestly say that without the lows, I wouldn’t have appreciated the highs. The most important advice I can give you is just enjoy the ride, throw yourself into it but don’t put too many expectations on it because university is different for everyone. Uni has been an experience that I personally will never forget!