My Guide to Bogotá: Part 2 – OurWarwick 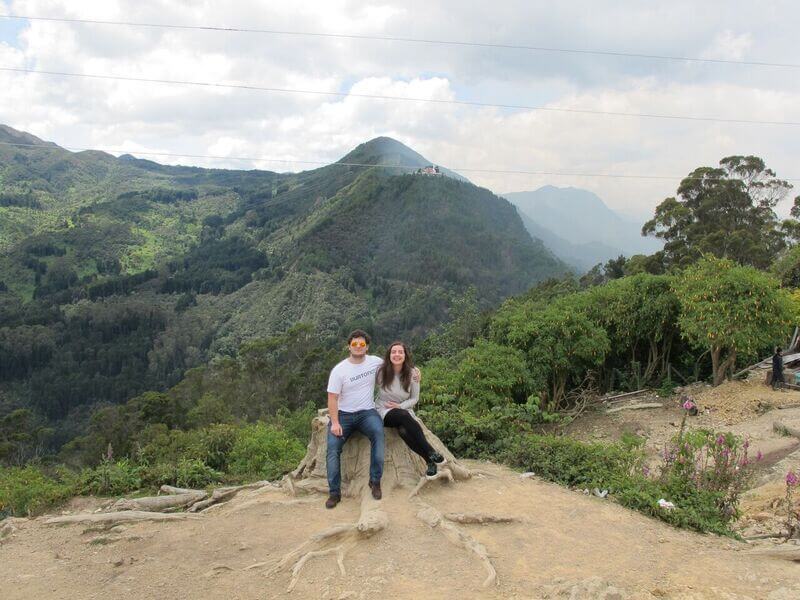 My Guide to Bogotá: Part 2

Yes, food, everyone’s favourite part. Well, I found Colombia’s cuisine a little surprising. I think when most people think about Latin American food, we tend to picture the flavours of Mexico- guacamole, tacos, tequila and spice- and expect that to be reflected in the whole continent. The truth is, Colombian food is fairly boring as the people here don’t like spice at all, and meat and rice tend to form the base of most meals. However, what it lacks in spice is made up for in quantity, as the Colombians favour a huge portion size.

The most common breakfast is an arepa (a maize-based food, almost a mixture between a pancake and bread)  with a fried egg, and coffee of course. Lunchwise, people tend to eat out, with most restaurants serving a set menu of a soup, followed by some form of meat with sides of rice, vegetables, salad, a juice, sometimes pasta, and fruit, usually priced at below £3. I won’t lie, Bogotá makes it way too easy to just never cook. 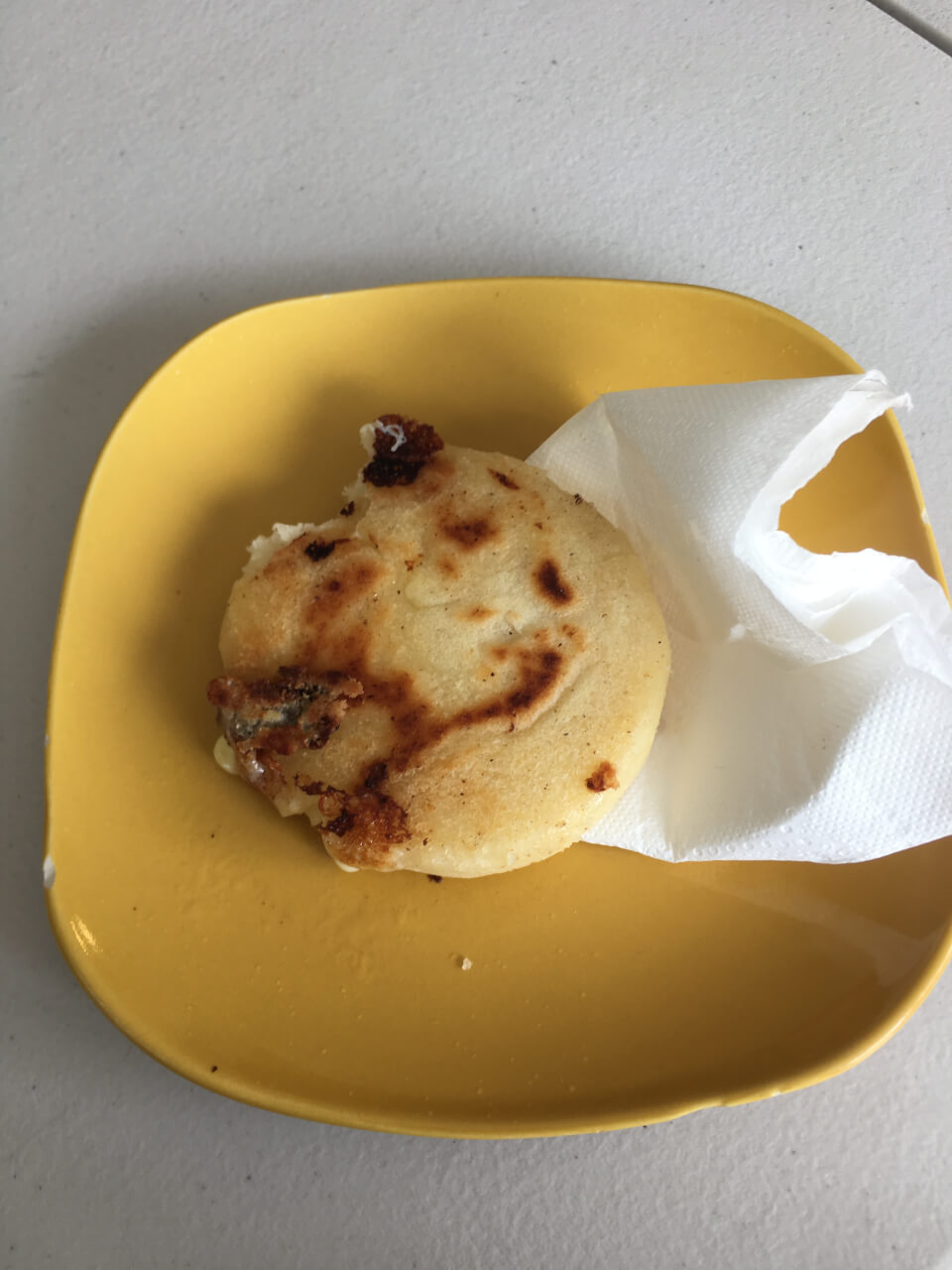 Arepas- the fuel of Colombia

Dinner is fairly similar, with more meat and rice, perhaps a plantain, and maybe some avocado, or aguacate as they are called here. (You will know this if you’ve visited Bogotá, as avocado vendors (yes, that’s a thing) will shout down the street with their cart at the top of their voice AGUACATE, AGUACATE at 6 in the morning). 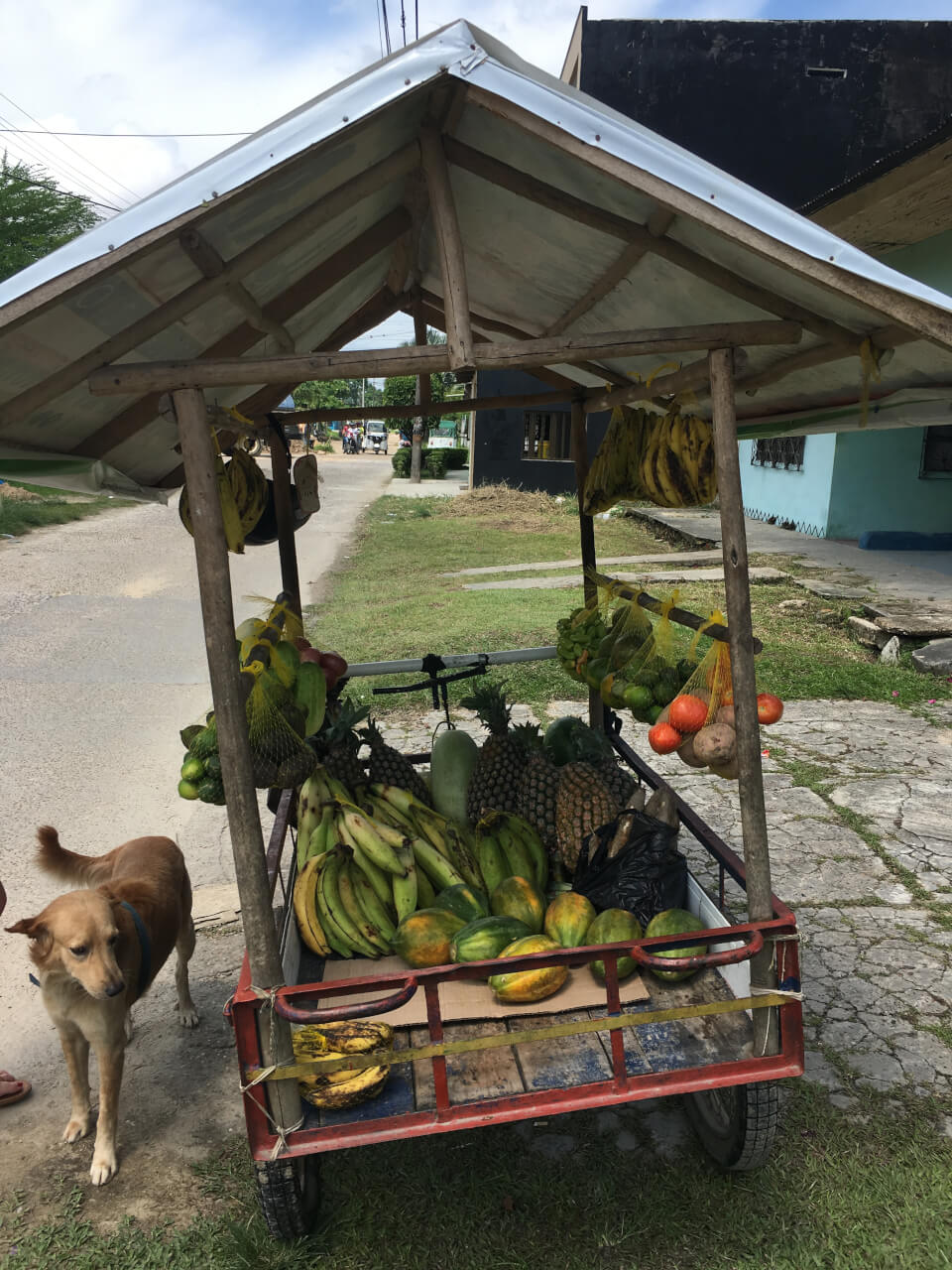 Bananas and pineapples galore in Leticia

Speaking of which, the fruit here is some of the best in the world, and they even have fruits that can’t be bought in England, such as maracuya, lula, uchuva and guanabana. As a result, the juices here are incredible! 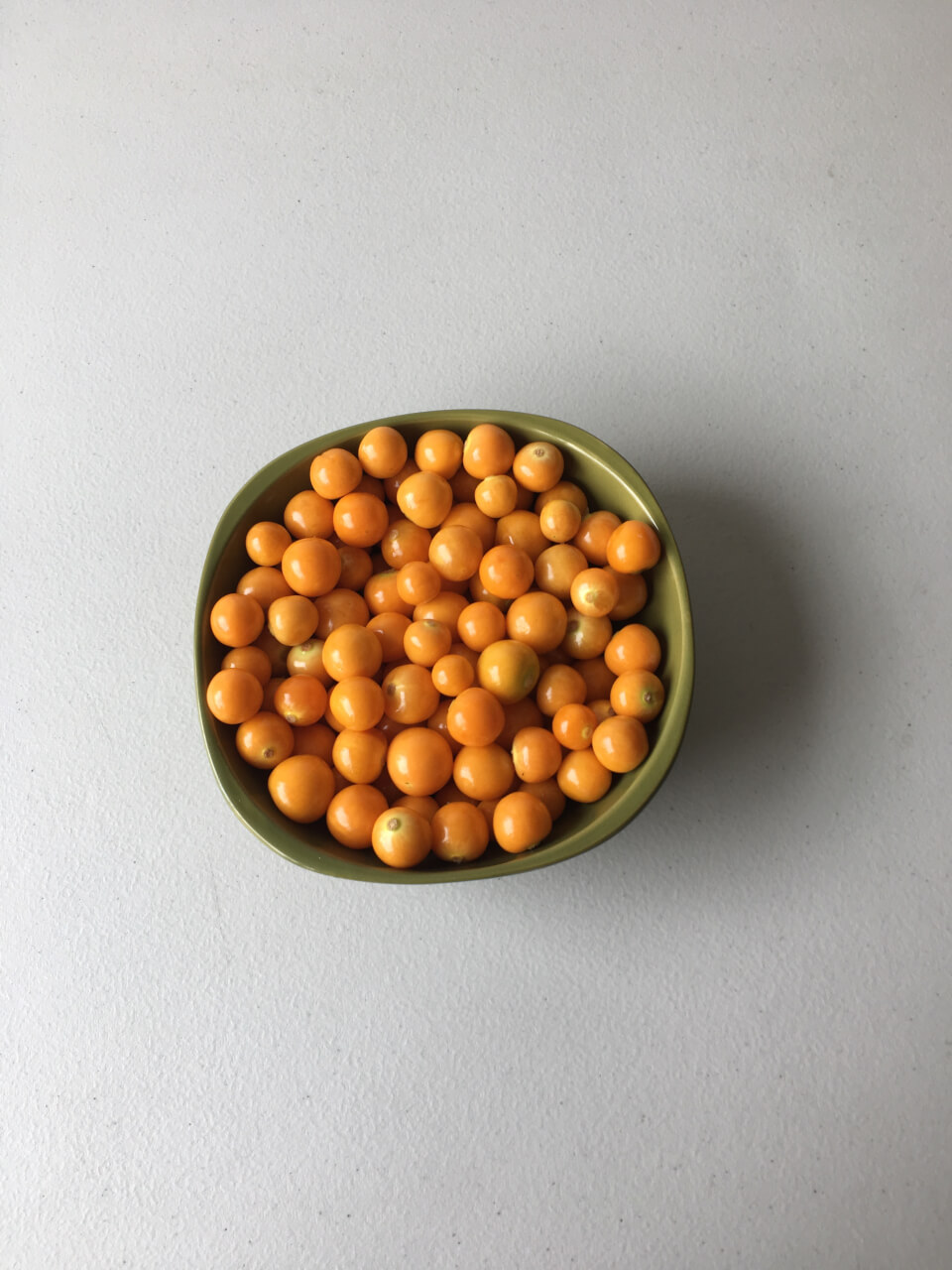 Uchuvas- not my favourite, but similar to a kumquat.

However, don’t be fooled- just because they don’t like spicy food here, they make up for the lack of flavour by throwing coriander on everything. I have even seen coriander ice cream. *shudders* If you haven’t guessed already, I actually despise coriander, and really struggle to eat anything with it, meaning I have to frequently order my food “sin cilantro” (without coriander) which provokes a lot of disapproving looks.

I’ve already mentioned how incredible the juices are here, but in Colombia, it’s quite common to just list flavours of juices on your menu with the option of having it in milk or in water. If like me, you are a bit sceptical of a juice “in milk,” don’t be! It’s effectively a milkshake, and heavenly!

Alcohol wise, Bogotá is a heaven for beer lovers, with several national brands being relatively cheap and good. They even have a huge chain of beer bars, which literally serve just beer and water, called the Bogotá Beer Company (or BBC for short!). However, other than beer, the range is lacking, and pretty much every other type of alcohol is imported, making it quite expensive. Forget wine or spirits! Although, if you are desperate for a shot or two, Aguardiente is the local favourite, which is very similar to Greek ouzo, and does the job, even if it isn’t very pleasant.

If like me, you are a lover of hot drinks, then Colombia is a tricky one. Obviously, the country is famous worldwide for coffee, however, it is quite common for Colombian companies to sell their best produce internationally, meaning the quality of standard coffee here is quite poor. Nevertheless, some coffee chains offer some incredible stuff, and the way to have it here is tinto, without milk. Tea is substituted by aromatica, a herbal tea made by simply throwing herbs and fruits into boiling water. And of course, hot chocolate is also wonderful here. Go to any cafe and they will offer a delicious chocolate, sometimes with cheese as well, which you are meant to melt in the drink, and then drink the mixture together.

I won’t lie, Bogotá is not the best city in the world for tourism, but I suppose that’s because it doesn’t attract many tourists at the moment. However, there are a few gems…

Monserrate- Situated on top of the mountains that overlook the city, Monserrate is a monastery that can be accessed by walking, a cable car or a funicular, and that promises an incredible view of the entire city at the top. 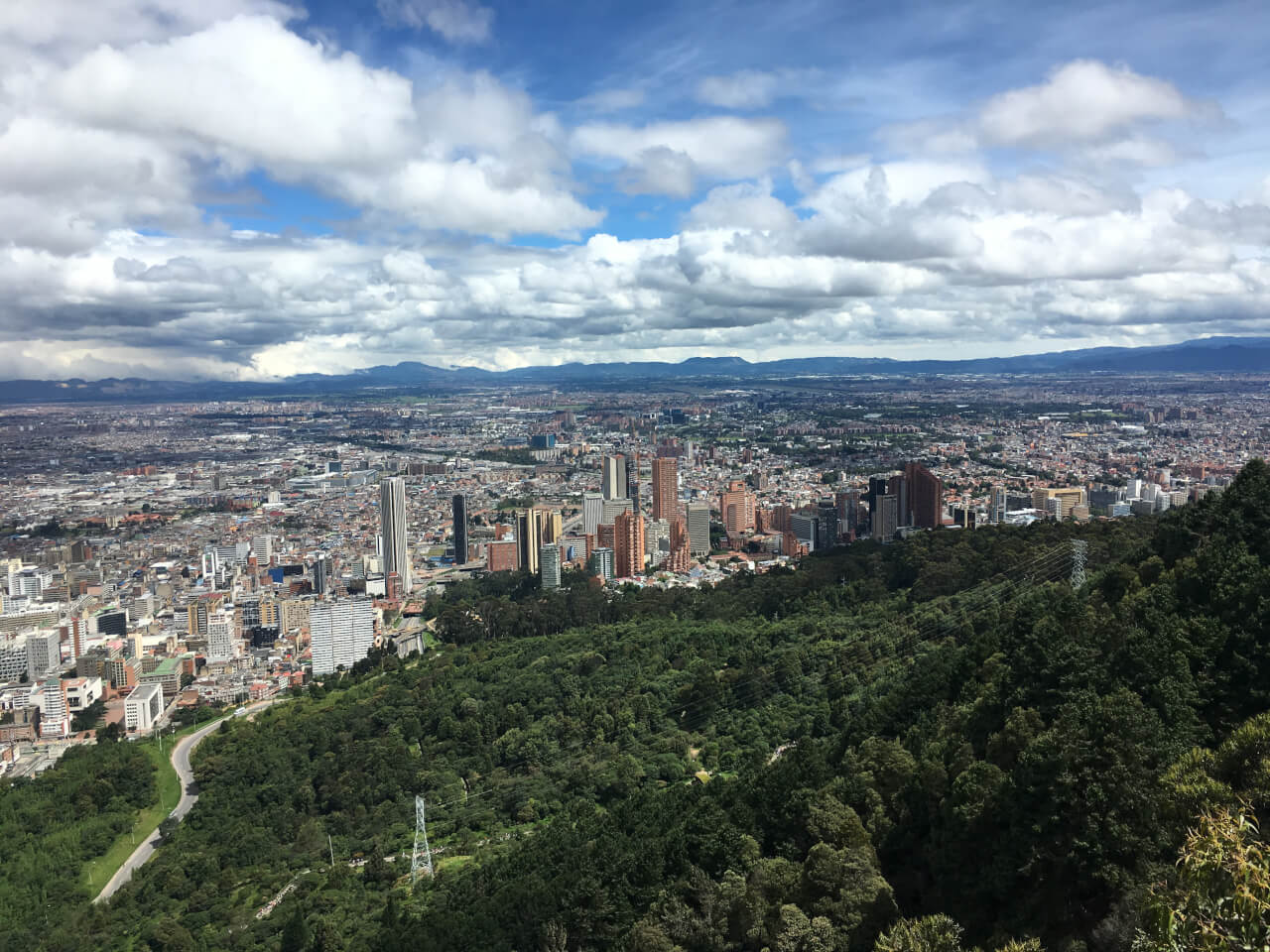 As you no doubt have seen in this blog before, I love the view from Monserrate 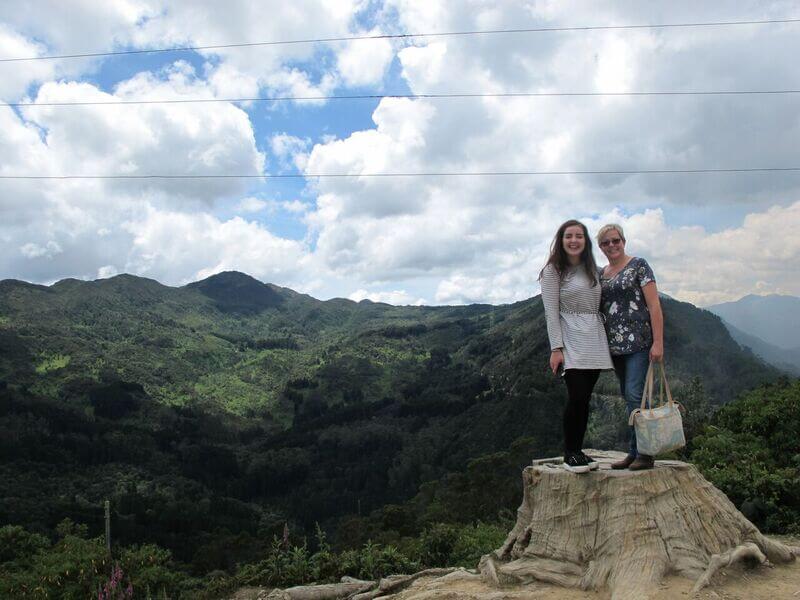 Behind it, there are also wonderful views of the surrounding mountains. I took my family here on the first day they visited!

Usaquen Flea Market– situated in the north of the city, is the quaint Colonial town of Usaquen,  every Sunday is the flea market and street food park. Unlike in the centre of Bogotá, where most of the markets sell the same cheap trinkets, this market offers some artisanal products, and the food is delicious. Usaquen also has some really good restaurants, as well as the Boho Food Market, which is basically Colombia’s answer to Selfridges’ food floor, and literally made my Mother and I lose our minds at all the wonderful food.

Museo Nacional– the museum that covers the entire history of Colombia, from pre-indigenous, indigenous, colonisation and Spanish rule, the civil war until the present day. It is very cheap with a student card and provides a broad look at Colombia. Usually, there are pretty good temporary exhibitions as well, for instance, when I went with my Mother, there was a Botero exhibition. Also, there is a really good gift shop (don’t judge me!).

Museo Botero– speaking of Botero, the museum dedicated to Colombia’s favourite artist is perfect for people like me who “don’t really get” modern art, as most of his paintings don’t require an art history degree to appreciate them. Featuring loads of his famous exaggerated figures, as well as works by Giacometti, Miró, and Picasso, and situated in the oldest part of Bogotá, it is a really good museum and accessible to all. 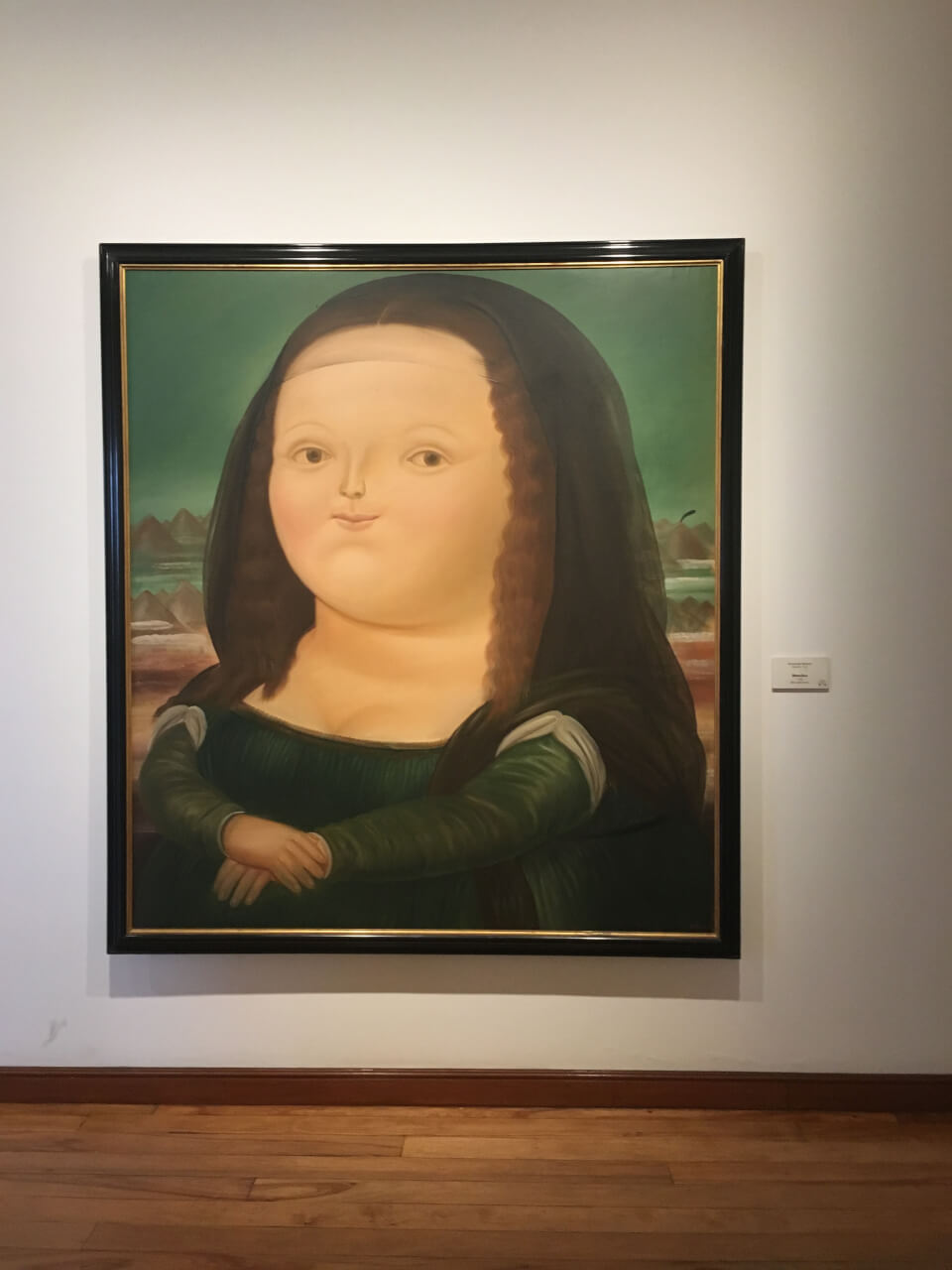 Botanical Gardens– within minutes of landing in Bogotá, you will soon realise how terribly hard it is to breathe here. I’m not joking. Thanks to being one of the highest cities in the world, and having quite frankly atrocious pollution levels, its quite normal to have to catch your breath, even if you’re just walking to university. My solution is the botanical gardens, where even though you can’t escape the altitude, the air quality is just so much better, and the rows and rows of tropical flowers, herbs, plants and trees are a peaceful escape from the chaos and car horns of downtown Bogotá. 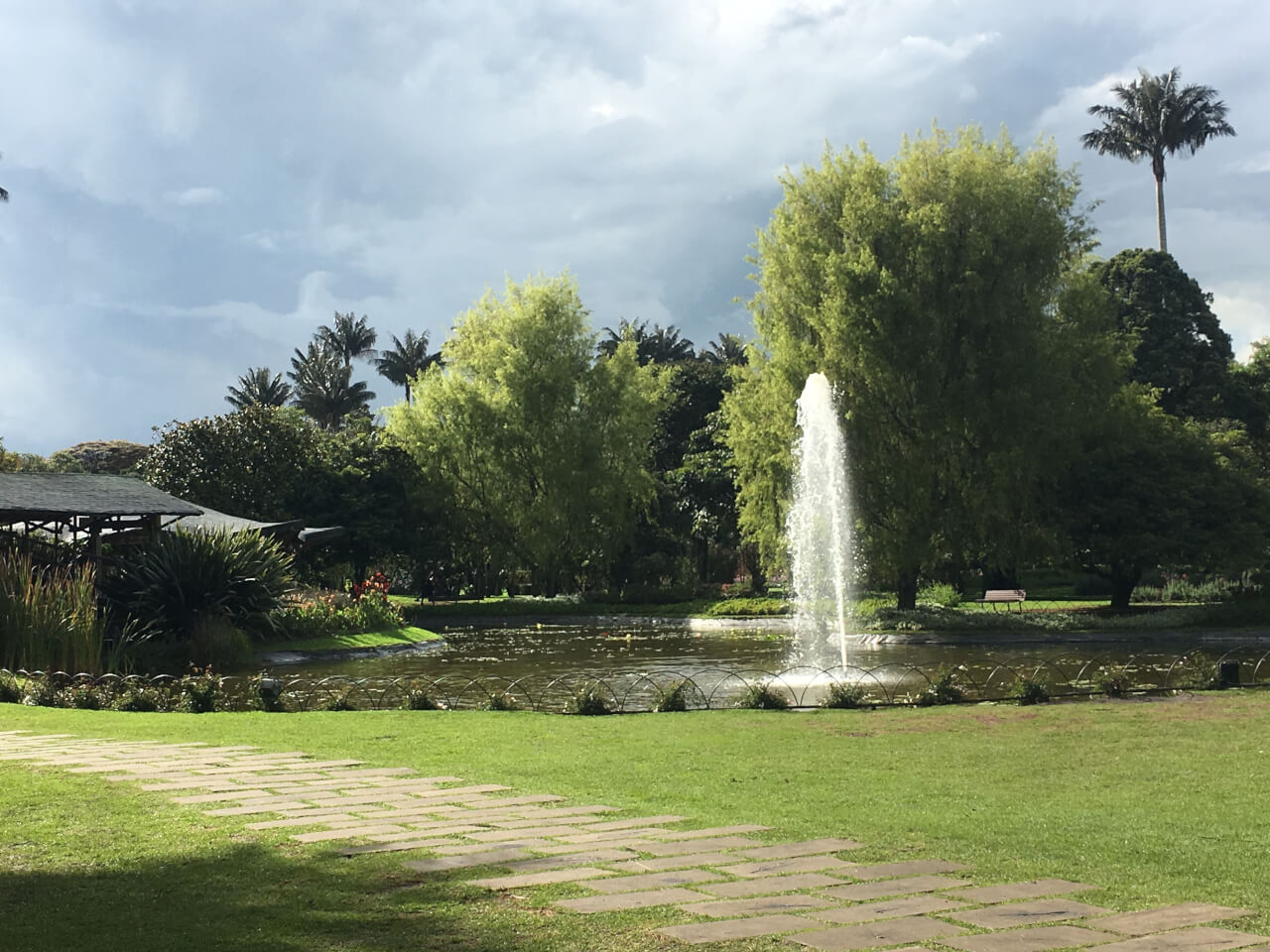 And there you have it. A snapshot of life in Bogotá, from someone who has spent almost 6 months trying to become bogatana! And whilst this city still continues to surprise me, as it has for my entire time being here, I am glad I chose to spend half of my year abroad here, in somewhere so un-European and un-English. Bogotá is not what I expected it to be, but then, when I look back, I don’t really know what I expected. And sometimes, it is good to be surprised!