My Guide to Bogotá: Part 1 – OurWarwick 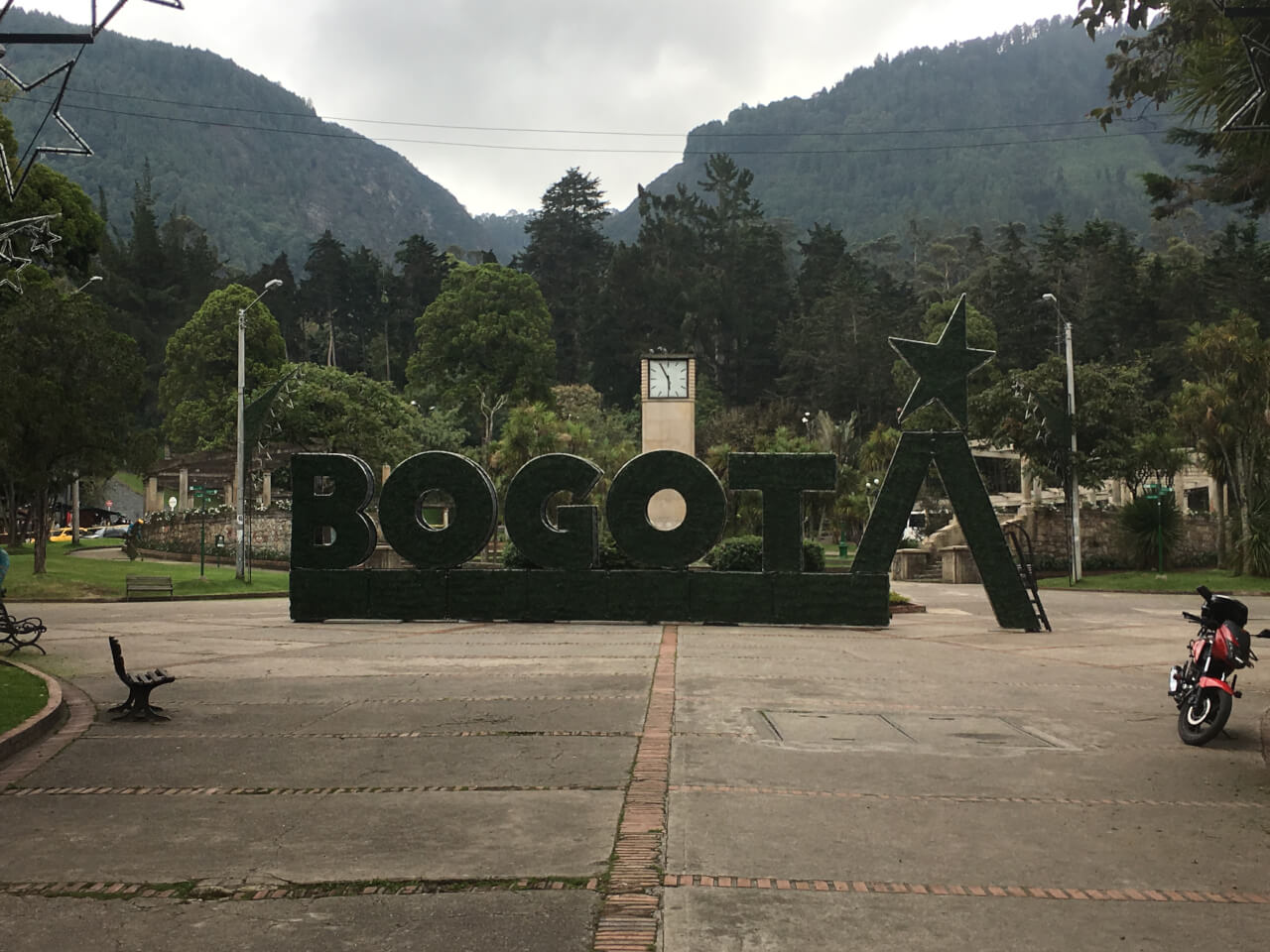 My Guide to Bogotá: Part 1

Maybe I’m emotional because I’ve started my final week in Bogotá, or its the joy from finally finishing my exams,  but I’ve recently become rather nostalgic for my home in Colombia, and, taking inspiration from Spanish and Italian blogger Claudia, I’ve decided to create my own guide for this rather quirky city that I’ve called home for the last 5 months. To read about Claudia’s time in Santiago de Chile, something which I did to plan my trip next week there, click here: https://our.warwick.ac.uk/a-guide-to-santiago-de-chile-part-1/ and https://our.warwick.ac.uk/a-guide-to-santiago-de-chile-part-2/. Otherwise, enjoy my rundown of day to day life in Colombia’s capital.

The Spanish spoken in Bogotá is renowned for being quite easy to understand, especially in comparison to other Hispanic accents, and therefore it is quite easy to converse here. Likewise, the slang is fairly simple to get your head around, with a few of my highlights being:

Rumbiar/ Rumbear– To party, something the Colombians are pretty talented at… speaking of which…

A La Orden– At your service, shouted by street vendors/ taxi drivers/ shop owners/ literally anyone trying to sell you something, meaning it is quite normal to hear this approximately every 1.2 seconds when walking anywhere here…

No Dar Papaya– the most important phrase! Literally, it means “to not give papaya” but in reality, it means to “not ask for it.” Be street smart: don’t take your phone out in a busy street, don’t walk home alone in the dark in an empty street etc. Be careful.

2) The Elephant in the Room

Speaking of no dar papaya, this leads me to my next point: crime and safety in Bogotá. In the UK, the perception of Colombia is that it is riddled with drug trafficking and civil wars, but I assure you, the country is trying to move past that. The crime in Bogotá tends to be the crime associated with any large city, and provided you’re smart and watch yourself, you should be okay. By following the rule of “no dar papaya” it is possible to avoid most of the crime, however, yes, sometimes you can be really unlucky. I have never been robbed here (fingers crossed), however, I do know people who have been, so you need to be aware. The most common place to be robbed is on public transport.

Public transport is not great in Bogotá, I’ll be honest, which is terrible when you learn how truly awful their traffic is. In fact, their problems with congestion are so bad, they actually have a scheme called “Pico y Placa” which means depending on your number plate, you can’t drive your car at certain times during the week, and if you do, you’ll have to pay a nasty fine.

Essentially, you have two options: the Transmilenio and buses. The Transmilenio was Bogotá’s alternative for a metro system (something which it cannot have because the city is effectively built on a wetland); opened in 2000, it is essentially a fleet of buses which have their own lane, and own stations, meaning they move faster than regular buses. However, they still have to obey traffic lights, so it’s still got nothing on the tube.

The normal buses are just like regular buses, following set routes, however rarely arriving on time, and rarely having enough seats, meaning you have to stand and practice your balance whilst motoring down Bogotá’s pot-holed filled roads in first gear. There are apps such as Moovit and TransmiSITP, which help you work out your route. 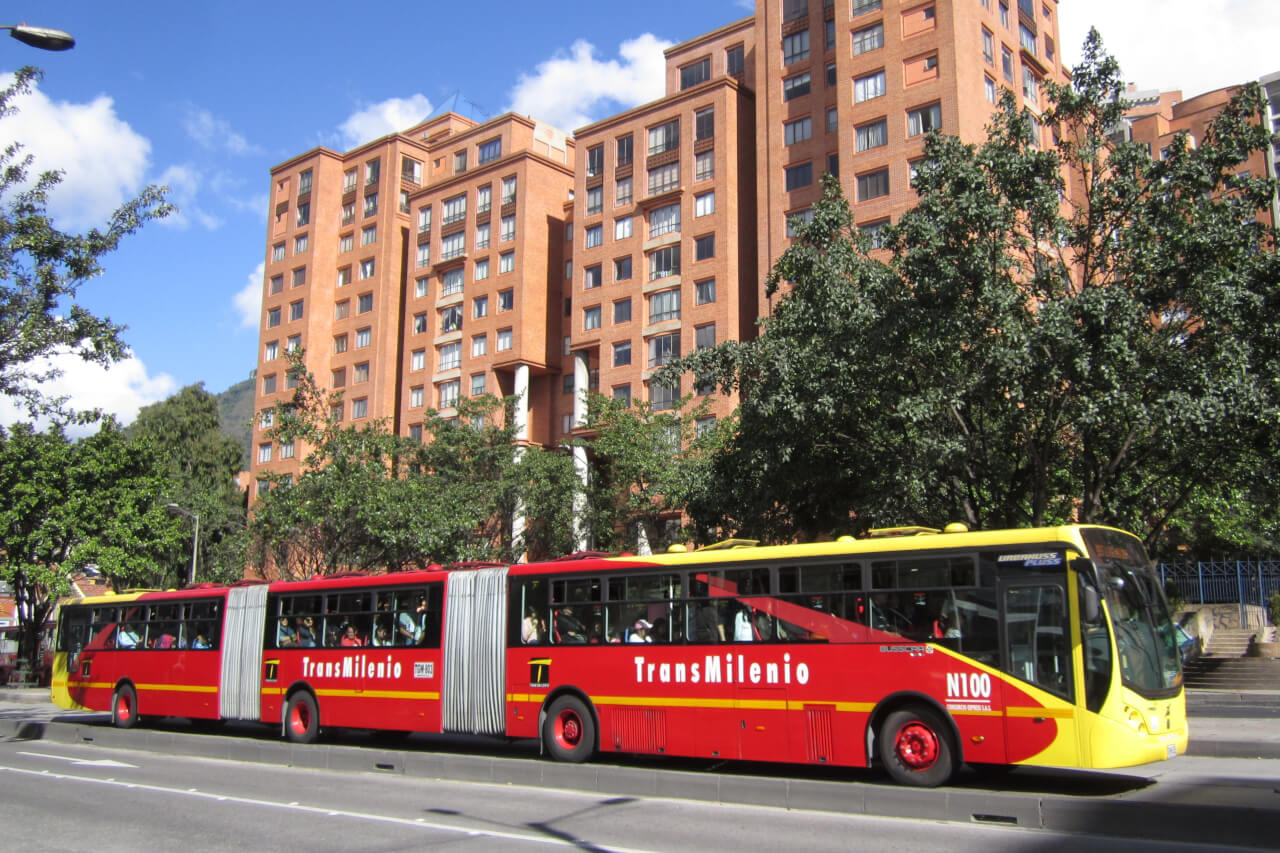 Look at her, in all her red glory!

However, if it is past 8 pm, or you’re not feeling public transport, there are always taxis, however, once again, there are quite a few rules to obey when hailing a cab here. Firstly. you should never really hail a cab on the road, as quite often they are illegitimate, and unfortunately, anything could happen…. Instead, there are many apps such as Cabify and EasyTaxi which you can use like Uber to hail a cab online and prepay.

“But what about  Uber?” I hear you cry!! Well, technically speaking, Uber is illegal in Bogotá, so once again, there are a couple rules you should consider when using it. First and foremost, no matter how few passengers, someone has to sit in the front, so that you don’t look like you’re in a cab. Secondly, it is advisable to not use it when travelling to and from the airport, as this is naturally a hotspot for lots of yellow taxis and police, which is dangerous for the drivers. However, aside from those, I use Uber frequently to travel around the city.

This is something I thought I would struggle with, as I famously have trouble navigating my hometown in England. However, I actually found navigating here pretty easy, as, like cities such as New York, Bogotá uses a block system. The city itself is long and thin, and on the east/ right-hand side are the Eastern mountains. The roads which are parallel to the mountains are called Carreras, starting with 1 by the mountains, and increasing as you go further west/ left. The other roads, perpendicular to the Carreras are the Calles, and the begin in the south of the city and count up as you go north. So, whenever you want to go somewhere, the address will say if the building is on a Calle or Carrera, and then which corresponding Carrera or Calle the main road is on, so you can just walk and count. 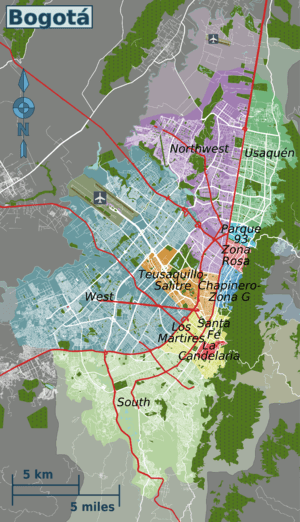 Some of the most famous Calles and Carreras have different names, for instance: Carrera 13 is Avenida Caracas or just Caracas, and it is famous because this is the road where the Transmilenio mainly runs. Calle 7 is la Avenida Séptima, or just La Séptima, and is another important road.

Bogotá is also divided into distinctive zones, with some of the most important ones being:

La Candelaria, the small red zone near the centre of the image, is the oldest part of Bogotá, and home to practically all of the remaining colonial architecture and the museums.

Chapinero and the Zona Rosa, the blue and pink zones above La Candelaria, are home to the livelier parts of the city, with most of the nightlife, some of the best restaurants, and was also home to my university.

Usaquen, the northern green section, is home to the slightly richer parts of the city and boasts a wonderful market and some good restaurants. Usaquen actually used to be its own city, but as both it and Bogotá spread, they merged into the one we know today.