Well, that’s it. I am now officially into my last week in Siena and wondering where on earth the last few weeks have gone. So much has happened over these last few days alone that I’m not really sure where to start. However, first and foremost, as promised, I have decided to dedicate this post to the most important event of the Sienese calendar. An event which after months of preparations, celebrations, endless drumming, singing, parading, and flag waving amongst other scenes of medieval splendour, finally took place on Thursday 2 July.

Yes, the Palio of course.

Before coming to Siena, I certainly knew of the Palio. In fact, when one thinks of the medieval town of Siena, the annual event of the Palio is often the first thing that comes to mind. That year-long strategic battle culminating in two annual bare-backed horseraces around Siena’s infamous Piazza del Campo. A race that has the potential to be over in a mere 90 seconds, and which origins date back to the 12th century. However, as an inhabitant of Siena over the last five months, I have come to realise that the Palio -which may seem nothing more than a simple horserace to the thousands of visitors which visit the city of Siena every year- in reality, is an event animated with intense and passionate civic rivalry. For the Sienese population, the Palio is far more than a simple manifestation; it is an integral part of their identity. What’s more, it has been this way since Medieval times.

Over the course of my blog post whilst living in Siena, I have often given readers a glimpse of some of the daily happenings and preparations concerning the Palio from as early on as February. Yes, I cannot even begin to explain the enormity of this event for the Sienese. In fact, to do so to someone who has never experienced life in Siena is very hard. However, recently I read something which did a very good job in trying to do just that and which I’ll share with you…

“Imagine that all Chelsea and Arsenal fans had been baptised in the church of their team and lived as near neighbours their whole lives. Imagine that their neighbourhoods had been enemies for hundreds of years but only got to compete against each other once or twice a year. Imagine if the players and the ball were blessed in their churches before every match and the centre of the city came to a standstill for a week beforehand – now you begin to understand the intense and passionate civic rivalry that animates the Palio.”

In fact, it has almost been two weeks since the winning contrada won this July’s Palio, and nearly every inhabitant from La Torre (the contrada of the Tower) is still walking and parading around Siena exhibiting with pride their flags around their necks, which I might add, are fastened with dummies…?! Yes, you heard right. As a representation of the ‘rebirth’ a victory of the Palio seemingly brings to the winning contrada, quite frankly I thought until this point I had seen it all… 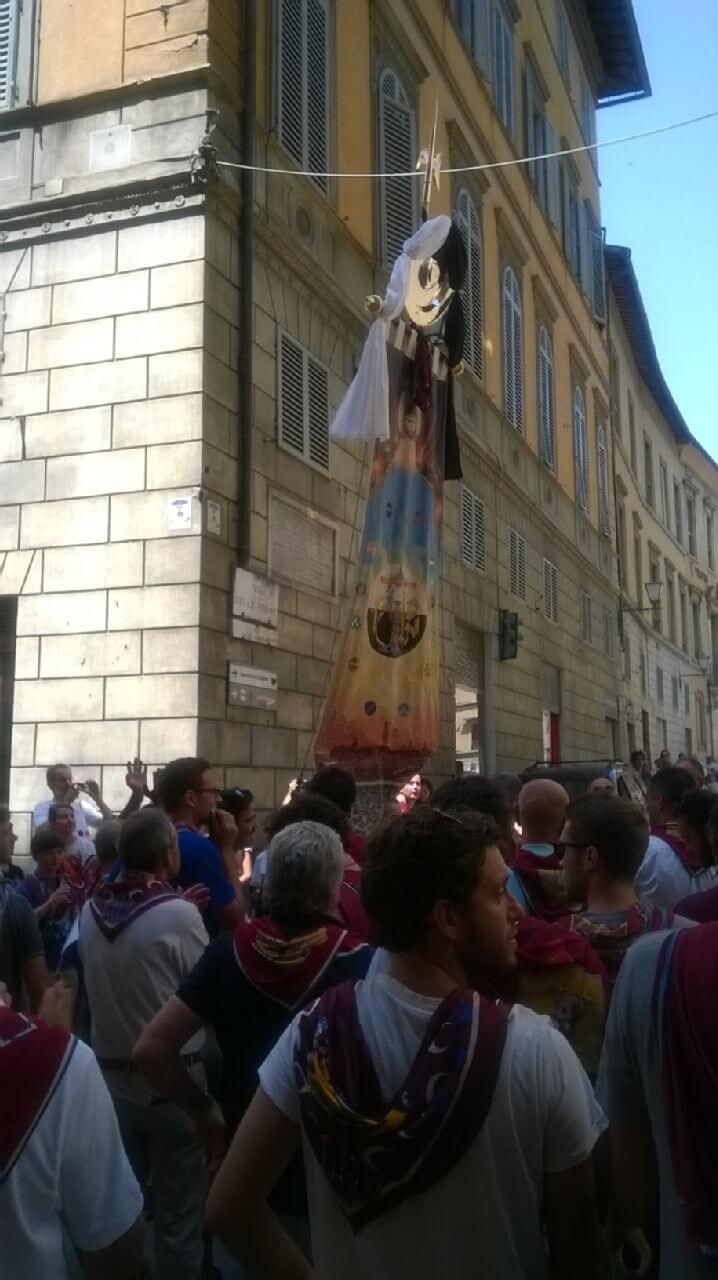 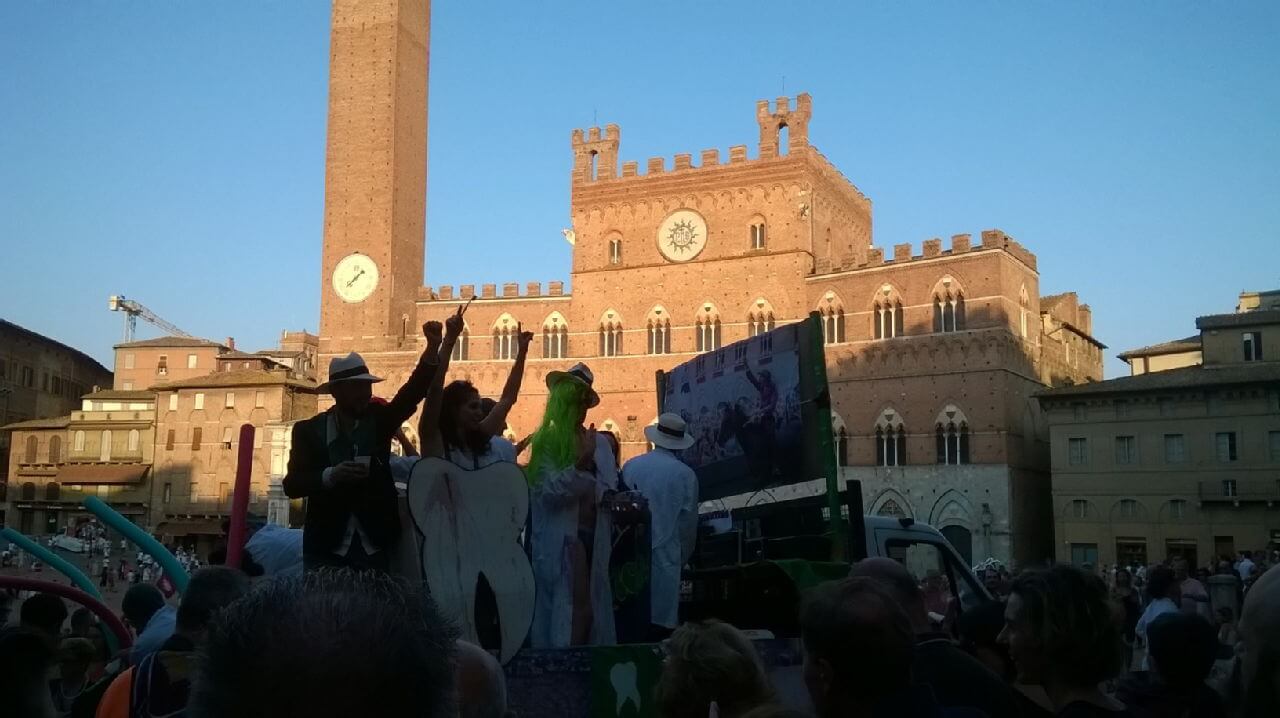 Anyway, back to the day of the Palio. 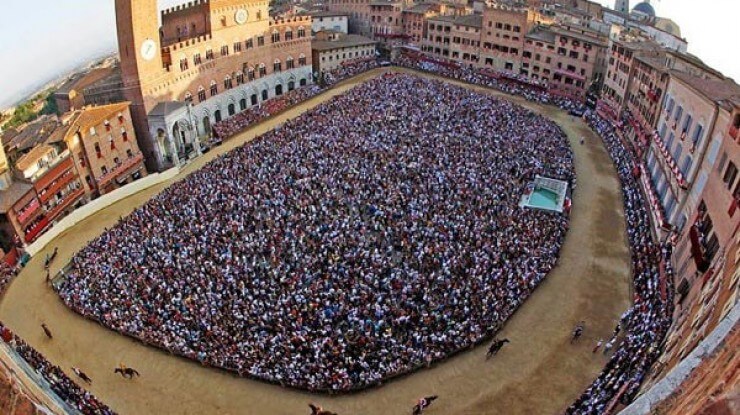 Admttedly not my photo, but we are somewhere in the middle there

Firstly, the city of Siena is divided into 17 districts (contrade) as I have mentioned before. The Sienese place their loyalty to their district above church or state, and each contrada has a name based upon a specific symbol or group of symbols, and set of associated colours. What’s more, fierce rivalries exist between these neighbouring districts, each with its own church, hymn, motto, insignia, and patron saint. The contrada that has been the longest without a victory has been recently nicknamed nonna (grandmother), with the current nonna being Lupa (the She-Wolf), who has not had a victory since July 1989. 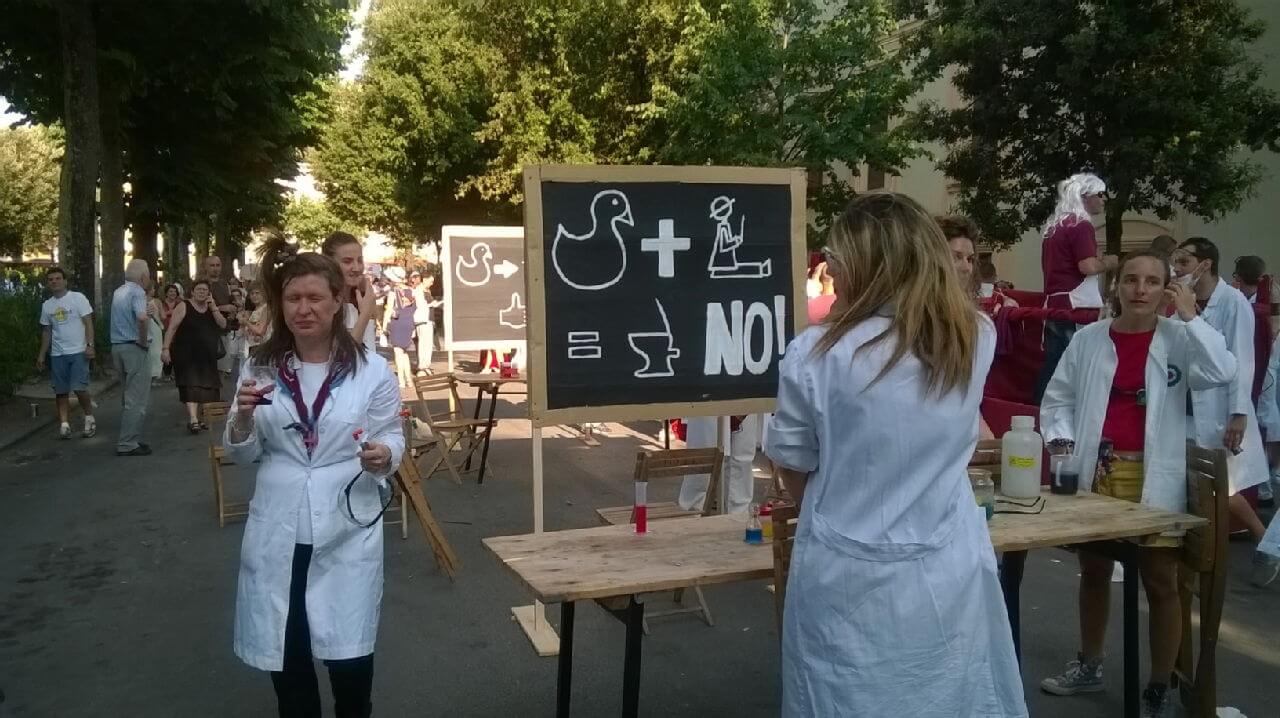 Post victory celebrations last Sunday as part of il Corteo della vittoria…Any guesses as to which contrada is Torre’s enemy? 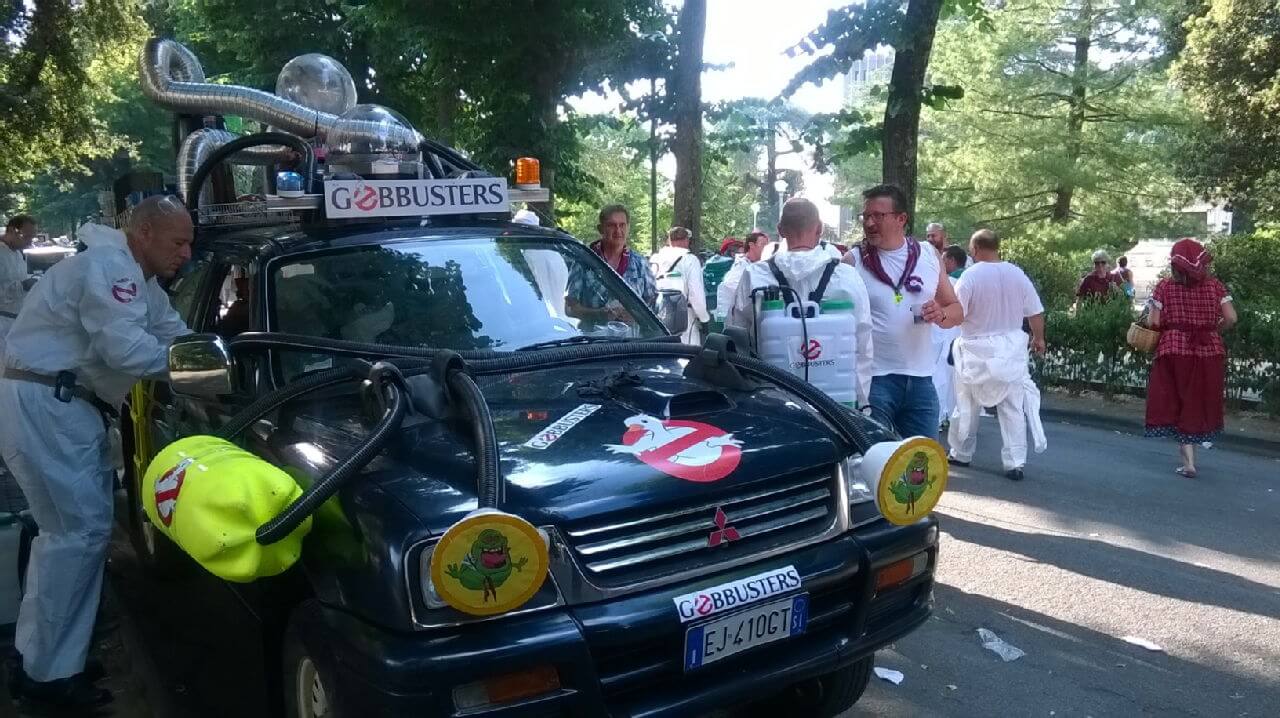 Yes the Goose of course…Goosebusters- get it?

With this in mind, you might now be able to begin to understand why since first arriving in February, weekly parading and flag waving practises of various contrade through the streets of Siena, in addition to contrada parties and dinners (all to the amazement of us Erasmus students) have been frequent occurrences.

Despite the fact that in this way, the people of Siena are thinking about and working on the Palio all year round, the real countdown to the day itself undoubtedly starts with the ‘Estrazione.’ Only ten of the 17 contrade race in each Palio; the seven who did not take part in the previous year’s Palio of the same month, and three additional contrade chosen by lot. After this event, which normally takes place on a Sunday no longer than 20 days before the Palio, the medieval shell-like space of the Piazza del Campo, begins to undergo a series of alterations in order to transform this space of the people, into a theatre and racetrack.

The choosing of the horses (la tratta) comes next. At 7am on June 29th and August 13th approximately twenty horses are brought to the campo to be examined by the vets and presented to the contrada captains. After multiple laps around the Campo watched closely by the captains, in the presence of the Mayor, from over 100 candidates, 32 are approved as healthy by the vets and then a final ten evenly matched horses are selected. Palio horses are always mares or geldings- all mixed breed with no thoroughbred horses are allowed to take part. 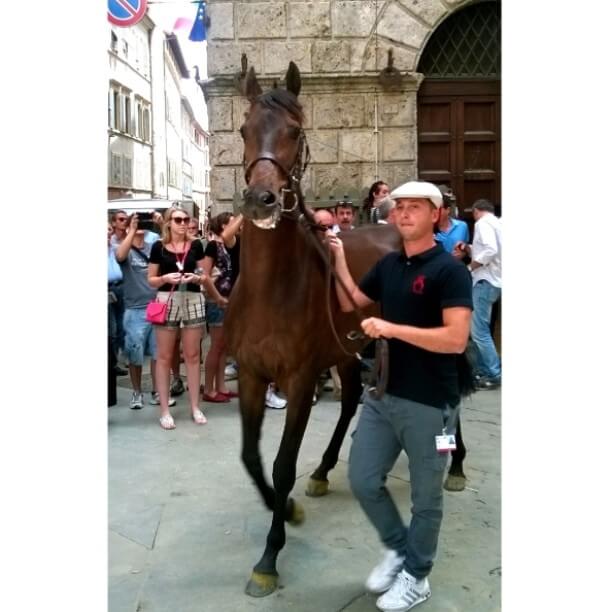 At around noon, the Mayor and officials of Siena take to a stage in the piazza for another ‘estrazione.’ This time involving the process of randomly extracting the numbers of the ten horses and the names of the ten contrade from two tumblers. After each horses’ number is drawn, the Mayor draws the number of a contrada to which it will be assigned. If the horse is perceived as a particularly good one there will be cries of delight from the contradaioli and despair from its rival. The contradioli (singing at the top of their lungs) then march their horses back to their stables where they will remain under 24 hour surveillance in the presence of the ‘barbaresco’ – an appointed stable hand to thwart sabotage until the Palio is over.

This was something that believe it or not, I quite literally walked straight into whilst on my way to return the mountain of books I was laden with to the library. See? Why would anyone want to study anywhere else in Italy? This does not happen anywhere else in the world I tell you! 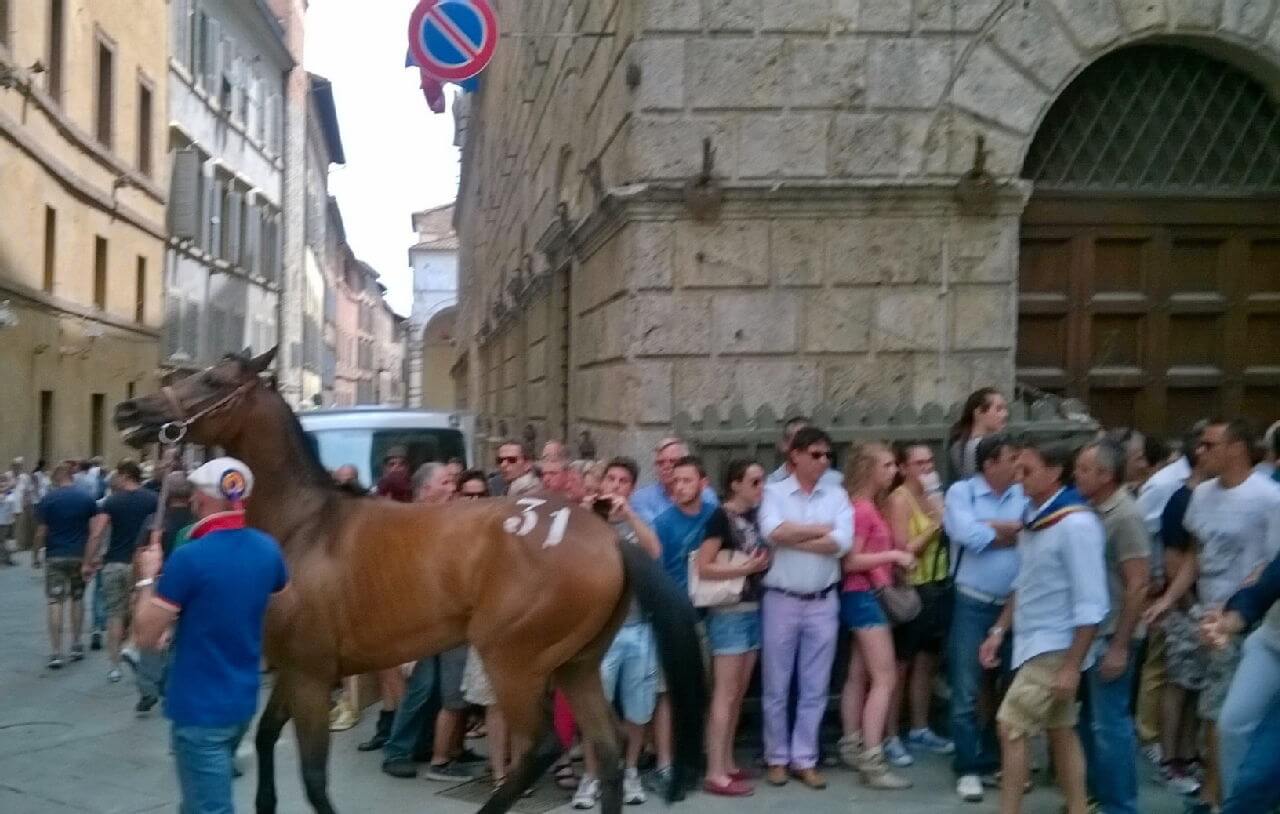 Library books quite literally in hand at this point