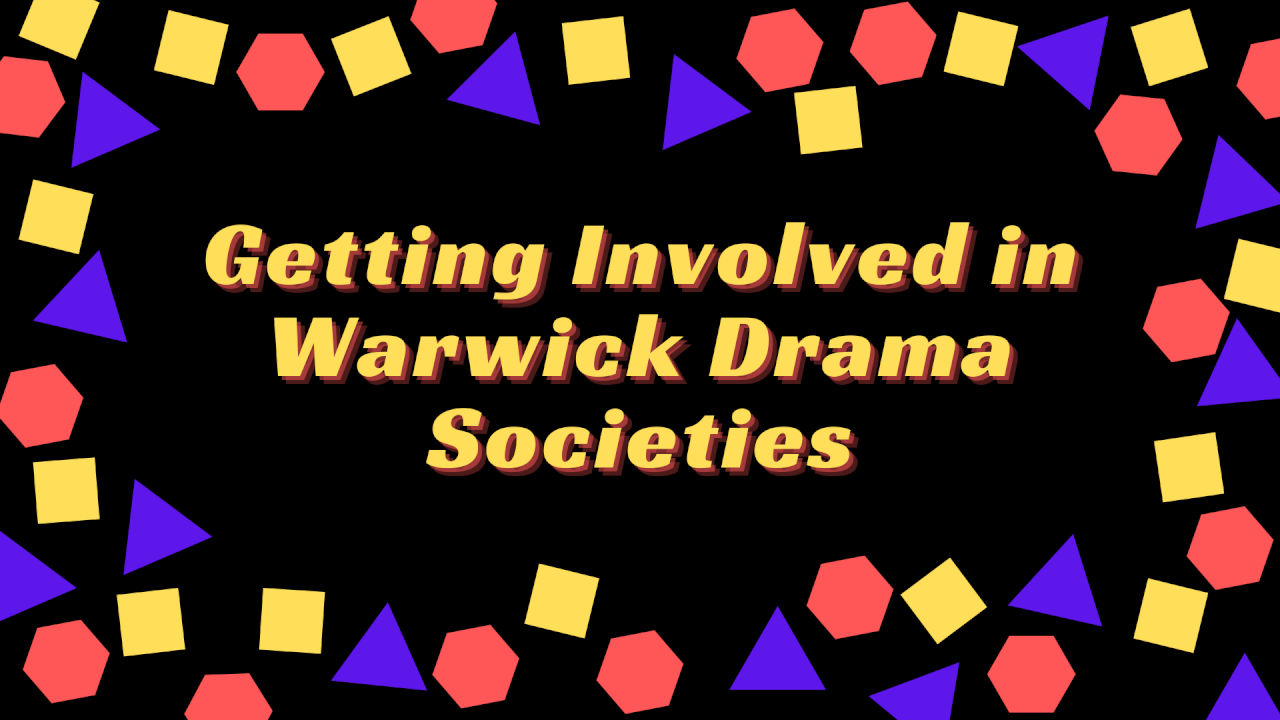 Getting Involved in Warwick Drama Societies

Being involved in the drama societies at Warwick has been one of my favourite parts of my University experience, and I have had so many amazing experiences through them. When I first started at Warwick however, I was quite intimidated by Warwick drama and I didn’t really know I could get involved. Therefore, I have decided to write about some of the ways that I became a part of the drama community at Warwick, and my tips for anyone like me who is unsure how best to get involved. Of course, there is no right way to be a part of Warwick drama, and the things I did might not work for others. On top of that, many of the events that happened when I was a Fresher may not be happening this year due to covid, or may be happening in a different form. However, the drama community at Warwick is incredibly welcoming and friendly, and anyone can join at any time, whether that’s in the first week of first year, or the third term of final year! If you want more information about the different societies and what they all do, check out my previous blog post here: our.warwick.ac.uk/drama-societies-at-warwick-a-beginners-guide/

The first show I ever got involved with at Warwick was the Warwick University Drama Society’s ‘Freshers Play’. As the name suggests, this was a play put on by and for Freshers, with Freshers directing, producing, and acting in the show. In my first year, we put on Twelfth Night, with me getting a small role as Maria. I had an incredibly fun time doing the show and I got to meet a lot of other first-years who wanted to get involved in the drama societies at Warwick, many of whom I have continued to see doing shows or at socials! This was a great way to get to know the others in my year who were passionate about performance, and to get to see how a show is put together at Warwick.

I took part in FreshFest in my second term, directing a play written by a student in the year above. FreshFest was a festival of new writing, put on by the Freshblood society over the second term to celebrate new student writing at Warwick. Six short student plays were chosen by the Freshblood exec, and anyone could apply to direct or produce one of the plays, with priority given to those with the least experience. This was a great introduction to directing, as all auditions and performance spaces were organised by the exec, the plays themselves were no longer than 45 minutes, and you didn’t have to gather a team and pitch your show in front of a panel. Everyone involved was really supportive, and I loved seeing all the other shows at the three-day festival at the end of the term! Having this opportunity to try out directing in such a supportive environment was incredible, and I would definitely recommend it to anyone interested in directing, producing or writing!

There are many different open mic nights and showcases on throughout the year, such as the Millburn Open Mic Nights, which anyone can get involved with either as a performer or as an audience member. Generally, these don’t require an audition and are open to any type of performer, including spoken word, song, dance and physical theatre. These events are also worth going to if, like me, you aren’t performing and just want to see some talented people showing their skills. They are also quite good places to socialise and meet people involved in performing at Warwick and see the various talents everyone at Warwick has!

The best way to keep up to date with all the shows that are happening at Warwick is by joining the Warwick Drama Opportunities group on Facebook. This facebook group, run by the Drama Collective page, is the go-to place for all audition, performance and production opportunities. Any member can post in the group from any performance society, and while these will often be advertised on the society’s Facebook and Instagram pages, the Opportunities Group is the best place to see everything together in one space. Anyone can join the group, regardless of whether you’ve taken part in any shows or society activities before.

If you want more experience in a certain role, or if you’re interested in a role but are unsure whether it would be something you enjoy, taking on shadowing or assistant roles can be a great way to get more experience without the pressure. Shadow roles are where you follow someone in the team around but without having much input, whereas assistant roles are slightly more demanding, and often require a certain amount of responsibility, but therefore more experience is gained. For example, in my third term of first year I assistant produced a show for the Shakespeare society, giving me the experience to move on to assistant producing in the Arts Centre the year after. These opportunities are often advertised on the Opportunities group mentioned above, but can also be gotten by messaging production teams, society exec members or individuals involved in the role you’re interested in.

Throughout the year, societies put on a number of casual shows & workshops requiring little to no auditions, panels or rehearsals. For those worried about over-committing, or who want a more casual involvement in Warwick drama, these activities can be a great way to get involved without the commitment of a term of rehearsals. Different societies have different casual activities, including workshops, low-commitment shows and scratch nights. These are also good ways to meet others involved in Warwick drama and get more of a sense of what shows and societies are like. Again, the best place to hear about these is on the Warwick Drama Opportunities group, or on society’s social media pages.

Warwick drama is an incredible, creative, welcoming space with something for everyone, from performance art to Shakespeare to musicals to new student writing. The people involved always love to see new faces and meet people with the same passion for the performing arts that they have. Of course, rejection is always part of the process for anyone auditioning for shows, and if you audition or pitch to put on a show and are rejected then do not be disheartened – even the very best actors, directors and producers have faced rejection before. Overall, Warwick drama is an amazing space and has been a defining part of my University experience, and I would urge anyone interested in the theatre to get involved!