Getting Involved in Society Execs – OurWarwick 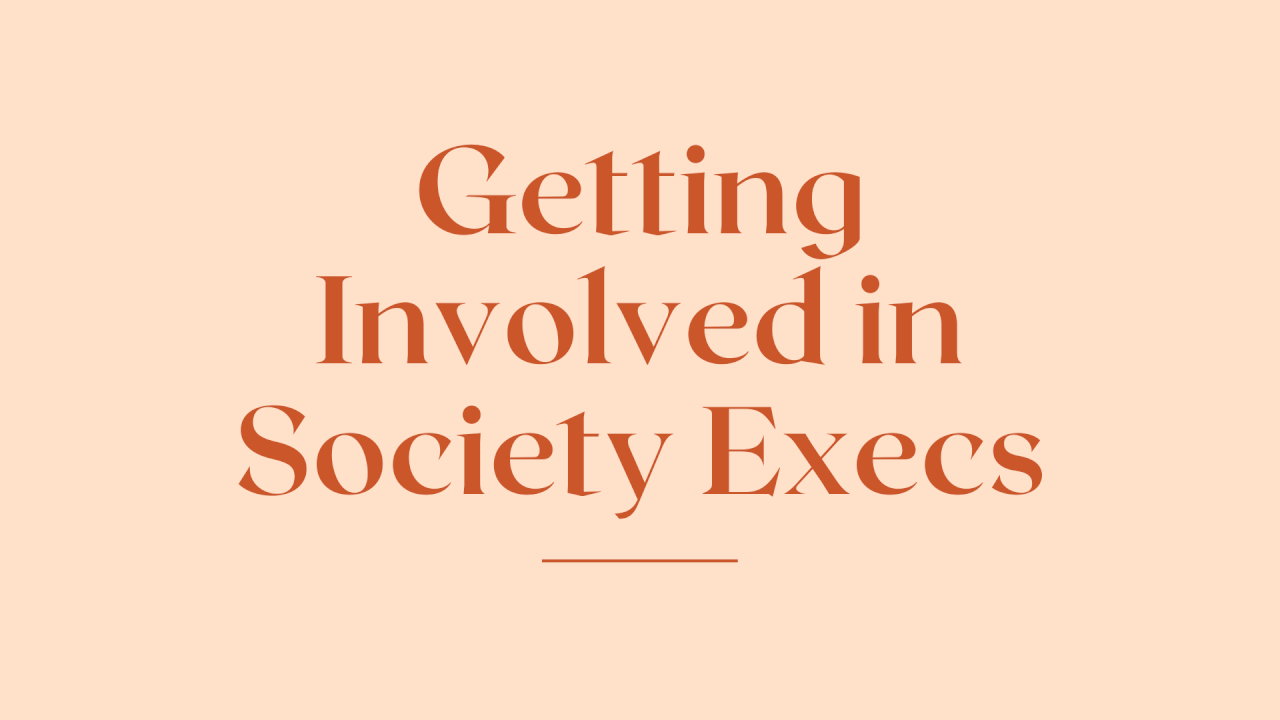 Getting Involved in Society Execs

As you may have noticed from some of my other blog posts, taking part in the drama societies at Warwick has been a huge part of my University experience. As well as participating in the activities, socials and workshops offered by the societies, I have also been involved in a few society execs, the groups of people who run the societies. As it draws closer to exection time, where the societies elect a new exec for the next year, I thought I might share a bit about my experiences on execs and why you should get involved in one!

I have been involved in three execs across my time at Warwick, being part of Codpiece and BAME Creatives in my second year, and Codpiece (again) and ShakeSoc in my third year (if you’re interested in what the different drama societies do, check out my previous blog post here). On each of these execs I had a very different role, which meant that I was able to gain experience in a number of positions. While most of the drama execs run in fairly similar ways, each one was slightly different, with the roles changing depending on the society and the other exec members. For example, when I was on the BAME Creatives exec the society was still very new, so we all played a much more committed role and worked communally to make decisions, as well as having our exec meetings more often. Generally, all the roles on the exec enable you to have your say about what the society should do and the direction it should go, allowing you to shape the society into what you want it to be. Taking on exec roles is also a great thing to add to your CV, as well as letting you meet new people through the society!

During my time on execs, I ended up doing 4(ish) roles, each with their own tasks and responsibilities. In my first year on the Codpiece exec, I was the Diversity and Outreach officer, being responsible for making connections with other societies and ensuring our society was accessible to everyone, while this year I was the Secretary, responsible for organising meetings, taking notes and sending out emails to our members. My time at BAME Creatives was a lot more flexible; as I mentioned, it was a new society, so the roles were often shifting as we figured out how the society would work. At the start I was the Safety and Welfare officer, acting as a point of contact within the society and filling out the health and safety forms. I then spent about a week as Socials and Welfare as the society changed its exec roles prior to exections, and spent the summer as Marketing and Communications manager, running the social media and keeping the society pages active over the first lockdown and summer holidays. On the ShakeSoc exec this year I was the Productions Manager, overseeing the shows we put on and acting as a point of welfare for those involved. This was a bit of a different role this year as we adapted to doing shows online, and involved me having to think of new ways to run online shows and get people interested in this time of screen fatigue. Doing these different roles taught me a variety of skills, including outreach, welfare management, marketing and organisation, as well as giving me a say in how the society would run. As well as these positions, there are also roles like President (in charge of the society), Treasurer (responsible for the society’s money), Socials (the people who run social events), and Workshops/Dramaturg (people who organise workshops or look over other’s work), as well as some society specific roles like the FreshFest Coordinators on the Freshblood exec, who organise the yearly new writing festival ‘FreshFest’.

Any member of a society can apply for a role on that exec, regardless of how involved they have been in that society previously. New execs are chosen through exections, which normally take place in the last few weeks of term 2. This generally involves those wanting to have a role writing a short manifesto detailing why they would be good in the role they are applying for and what they would want to do in that role. These manifestos are then either circulated to the society’s members, or read out at an exection event. Members of the society can then vote on who they want to take each role, or whether they want to re-open submissions for that role. New exec members then get a handover with the old exec, where they talk through the role and often work together during the third term, allowing the new exec members to get comfortable in their roles. Any roles that aren’t filled are then re-opened, allowing people who may not have applied the first time to get involved.

Hopefully this has given you a bit more understanding around what being on a drama society exec is like, and some of the roles available. Of course, each society will run exections differently, so it’s worth checking out the social media pages of whatever societies you’re interested to see what they’re doing.

If you’re still unsure about running for an exec, here is some advice for anyone who might be interested in running for a role:

Being involved in society execs has been an excellent part of my University experience, and I would definitely recommend anyone interested to get involved and run for a role!