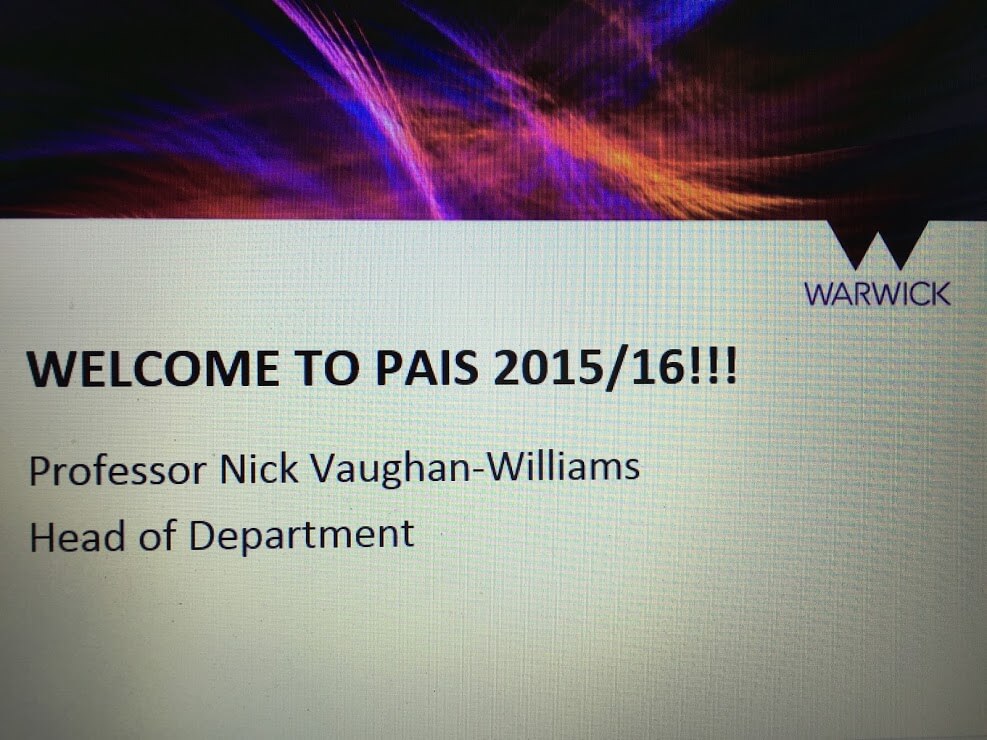 With term 3 fast approaching, I will soon be deciding my second-year modules – how time flies!

I thought it may be helpful to write about my first-year modules, and how I have found/am finding them so far. I haven’t been given any guidance in writing this – and so can assure you it is all my real opinion. I will try to include some advantages/disadvantages of each module to make it as helpful as possible.

Just to clarify, in the first year the Politics and PAIS modules are exactly the same – there is no difference whatsoever.

These modules are taken during term 1 and 2, along with lectures/seminars also taking place during term 3

Political Research in the 21st Century

This module is all about the skills you need to undertake research. During our first lecture, we were told that the focus is us “becoming a 21st-century political researcher” – and I do feel it has achieved its aim! The module itself is fairly broad; covering different issues on social media, film, media, music, popular culture and the internet. My favourite lecture was “Researching Voting Behaviour” since it linked very well to the 2015 General Election, and therefore very current to study. I also enjoyed the “Ethical Problems in Political Research” lecture where we looked at whether Facebook manipulating the news feed of its users is justified, or ethical.

As the title suggests, this module is an introduction to politics. All the topics are designed to cover the foundations of various issues within politics. The first lecture was quite simply titled “What is ‘politics’?” (Which is a much more complex than it may seem), where we studied the different definitions and perspectives of politics, which is key to every essay. I found the “Parties and Voting” and “Pressure groups and the media” lectures most interesting since they were very relevant to key debates occurring today. Overall, I am really enjoying this module!

This module covers issues faced at a global level; for instance, the Cold War, globalisation and the global financial crisis. You will also study various theories such as Realism, Marxism and Liberalism. I gave a seminar presentation on “The Political Economy of Development”, where I focused on the Millennium Development Goals.

I chose this module because I loved studying Economics at A level, and wanted to carry this on during my degree, especially since the two disciplines interlink very well! I know many students were concerned about the module being too mathematical, but it really isn’t – you are expected to study topics within economics, but it is very manageable.

I have literally spent the last 5 minutes trying to think of a disadvantage, and honestly cannot – this module has definitely exceeded expectations, and I highly recommend it to anybody!

As the title suggests, the module is split into 3 parts, each delivered by a different lecturer. My favourite was the democracy lectures since they raised a lot of good discussions during the seminars which were very insightful. I ended up choosing the justice topic for my formative and summative essay questions (on the existence of private schools).

Overall, I am pleased with the first year modules! The department is also very good at listening to (and actually doing something) about student feedback, so I wouldn’t worry at all!