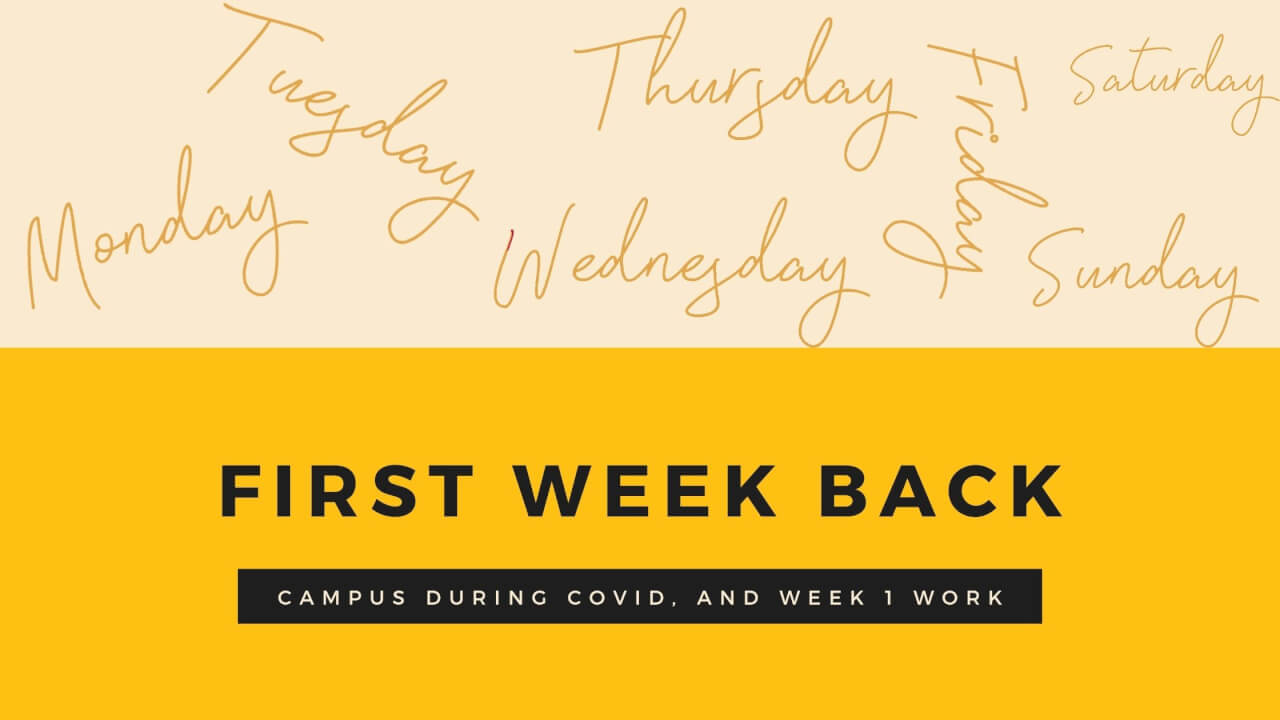 As the first week of the first term of this highly unusual year finished up yesterday, I was getting quite deep in my thoughts about how different everything has been so far. Not only because of the new Covid changes, but also the huge leap from 1st year to 2nd year. The change was much bigger than I expected, but that’s not to say it’s impossible to manage!

First things first, there are a number of large changes on campus that directly affect all of the students here at the moment, and I’d like to mention them, just so people have an idea of what it looks like to study here at the moment.

Firstly, campus IS open! Yes, there are restrictions, but all of the study spaces, and some cafes and restaurants are all open and working 🙂 This means the Library is open, the learning grids in Roote’s building and University house are open, and the Biomed Grid is open too! Of course, all of these are running at a limited capacity of much less than they would’ve in previous years, but there are enough people staying home right now that you should be able to find a place to study!

For example, I’m typing this blog from the Roote’s Learning Grid now, and though the room has officially reached maximum capacity, there is still a relatively constant stream of people moving in and out of the grid, continuously freeing up space. Of course, all of this is being carefully monitored to ensure maximum sanitisation of workplaces and social distancing between people at all times.

In regards to more social places, like Fusion, Terrace bar and Pret, these are all open and serving foods and drinks! Pret is a very big hotspot on campus at the moment, so unless you arrive early or get lucky, you might not be able to find a seat inside, but you can still quickly get a drink or a snack, and go enjoy it in the Piazza. Fusion is now running as a sit down restaurant. They have one time paper menus un use. They then come to the table and take your order, rather than you lining up at the till to order and pay like before. They are serving food in takeaway or disposable dishes as well, so there are lots of safety measure in place.

Walking around campus, I can assure you that it is NOT dead! It may not be as lively as previous years would’ve seen it, but there are people walking around, going to the shops, grabbing a coffee, or just enjoying a socially distanced walk with a friend from another accommodation.

The sports hub is also fully functional. I actually did an instagram takeover on Warwick’s official instagram page covering all aspects of the sports hub now 🙂 So if you’re curious go check out the Sports Hub Highlight on their page for more on that!

Right, so enough of that, now that you know that everything is open and functioning as normal as possible at the moment, I wanted to give an overview of what my first week of Year 2 looked like.

My last post talked about first year timetables, and at first glance those timetables are terribly full. Once you break it down week by week, however, you notice that it isn’t overly full, and even when you take into account the number of assignments due, you see that First year really is about getting to know how to study in university, rather than testing how well you can manage. Your first year is meant to help you grow, and prepare you for the next two (or three!) years of higher level study.

Of course, this year is different to last year regardless of course content, but Life Sciences have done a wonderful job of trying to keep the content as dispersed as it would’ve been in normal times. That being said, my first week was loaded! As of last Wednesday I already have an essay assignment for a tutorial, plus 9 lectures to cover for three different modules.

While this might not seem like a lot of work for one week, I think it is more that it was just so unexpected, due to the laid back start we had last year. So suddenly being bombarded with 9 lectures and a research based essay assignment came as a bit of a shock. Plus, since everything is online, except for the tutorial I had, the lectures aren’t as clearly notified, so there is a lot of responsibility on me now to make sure I know when I am meant to be lecturing, and when I can be working on other stuff.

On the note of inline lectures, the way Life Sciences have done it, which I actually found to be very useful, is they’ve gone ahead and pre recorded each lecture, sharing them on the Monday of the week they would’ve been timetabled, in small blocks, of 20-25 minute clips. So a one hour lecture can be divided into anywhere from two 25 minute clips, to 3 15 minute ones, depending on just how much content then lecturers need to cover. This method of week by week release is really appealing in my opinion, because I don’t feel super overloaded with work, as I might’ve if everything had been released in one go. It’s also super nice to think about the fact that the lectures all went through the time and effort of recording each of these lectures, specifically for this year, rather than simply releasing previous year lecture captures. They really are trying to keep it as normal as possible right now.

On another note, I did mention that my tutorial last week was in person. This is yet another thing that the school is doing to try and keep the normality up. Our tutorial was held in one of the lecture halls on campus, and it was just my tutor group, so we were pretty laid back, as we would be in a normal tutorial. This year, an interesting part to the tutorial system is the addition of rotational tutorials, which are basically tutorials with a different tutor each week. We get four of these, and that is the tutorial for which I have the essay assignment due. I’ll hopefully write another blog going into more detail with that after I’ve experienced it!

Right, so I don’t want to dwindle on for too much longer, for fears of turning this into a reflective essay rather than a blog, so I’m going to wrap it up with a final thought.

Times are different, but that doesn’t mean they have to be difficult. University staff, public bus drivers, cafe and restaurant staff are all working alike to bring back as much normality as possible. The best thing we can do in this situation is not complain about changes, or restrictions, but rather accept them and try to help everyone make the best of these changes, because these are strange times, and being positive is the best one can do!

I hope you all had a great first week, and and even better second week! Until next time 🙂