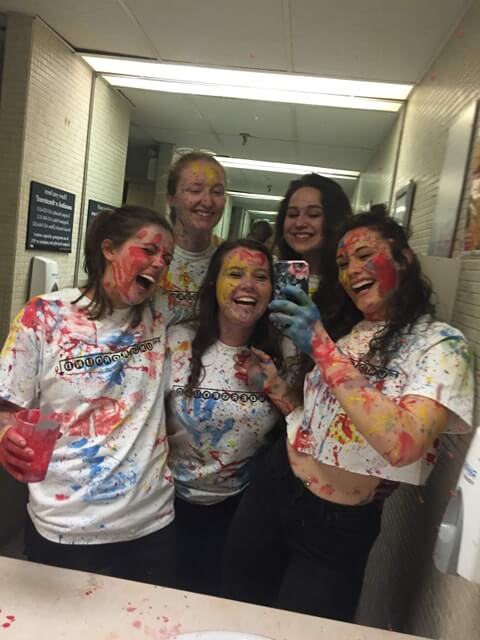 So, as mentioned before, my year abroad has come to an end (at least academically).  I’ve just finished sitting my exams (3, and my first in 2 years!), and have packed up my belongings into more suitcases than I’d like to admit ready to store whilst traveling.  April has been a month of new experiences but also some goodbyes, which has left it with a strange feeling; but nevertheless, I thought a summary of the final two months of studying would be a fitting end.

March was a busy month – starting from getting used to the cold and snow after a trip to Sydney (Australia) over the reading break. The weather remained pretty cold up until the middle-end of March, which was new, but once it reached above 0 degrees it has been more than pleasant! I started the month with a visit from my friend from school, Jemma, on her reading break from Montreal – where we had a great time relaxing and taking in parts of snowy and picturesque Kingston over the weekend.  Alongside training for quidditch still taking place, I joined in on exec meetings for one of my societies next year as we plan the social events coming up. We also, as a team from quidditch, took part in the Relay for Life event held here at Queen’s. It was a 12-hour relay overnight, from 8pm-8am, where one of your team has to always be walking around the track. It was a fun, eventful, and moving time and I would do it again in a heartbeat, raising money for the Canadian Cancer Society.

Smiling through the pain of a 6-2 loss!

The other big event was going to see my first NHL game! I traveled up to Ottawa to go see the Toronto Maple Leafs play the Ottawa Senators, and whilst the game and score are not particularly pleasant for many Leafs fans to remember, it was definitely a lot of fun! The atmosphere in the rink was so different to watching at home and I can only hope I can see more games. It’s also inspired me to go watch some of the more local ice hockey games, such as the Coventry Blaze, as it’s a sport that I’ve really been able to learn and follow here.

The two other major March events were St Patricks Day, which is surprisingly celebrated a lot here in Canada, and the National Championships for Quidditch – which is in one of my previous blog posts from last month! They rounded off the last two weeks in March well and really reflected the fun but busy time.

The start of April signified the end of classes and the start of the busy exam period – but also the start of much warmer weather! The last month of studying went by super quickly, interspersed with some more fun events that made everything that little bit better. An impromptu $1 clothing sale spread like wildfire and lead to a very happy and warm group of people, to regular get-togethers for watching the NHL Playoffs.

We’re such happy people when we get discounts!!

The club on campus (think a more gentle version of Pop!) also held a Tricolour paint party to celebrate the end of the year, which was messy – as expected! It was a great stress reliever too, even if some of us did have essays due in the day after.

Appreciating the change to throw paint at people more than we should!

Other than those times, a lot was spent studying in the library. My three exams were all wildly different, from a multiple choice one to short answers, to two essay questions. This offered a lot of variety for studying and meant I didn’t get too distracted when it came to crunch time!

And finally, April has meant some goodbyes. I’ve made plans to come back to Kingston after I’ve traveled out west (that’s in my previous blog!), so I’ll get to see a lot of people that are planning on remaining, but there’s still some who have left and that has made it hard. So many people here have become close friends quickly and whilst there have been tears, I know that it’ll be okay and there’ll be chances to see each other and keep in contact (thanks to social media for that!). With uni done now until October, it’s time for the fun to begin! I’m looking forward to keeping you updated with the traveling and how I’m preparing for my final year.  See you soon!