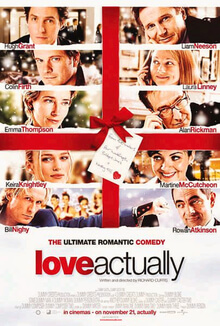 Well. In the last few days I, along with most of the South of England, have gone from tier 2 to tier 4, and my Christmas is looking quieter than ever. I don’t really have the energy to write a long blog about university, which in all honesty, seems more alien and isolating than ever. As a result, I’ve decided to centre this blog around the delightful, if somewhat terrible Christmas film, Love Actually. A university staple, I have watched it every year with various friends, meaning I am well equipped to rank each subplot. However, if you do make it to the end of this blog, and you do indeed disagree, why not comment below – maybe this will be the most contentious decision of 2020…?

Spoiler alert: It seems obvious, but naturally, the following blog will contain spoilers, so if you have not already seen Love Actually, I advise you to watch it prior to disagreeing with what I have written below.

10. Rufus In last place we have Rufus. You’re probably trying to remember, who on earth is Rufus? Well, he is Rowan Atkinson, and according to Wikipedia, is considered to have his own section. He gets last place because of his insignificance to the story in general, also because his segment is infuriating: you know the one, where he takes years to wrap that awful necklace…. I get flashbacks of pain to it every time I purchase something ina shop.

9. Colin, Tony & the American Girls This only slightly edges Rufus, but as its an actual story-line, it seemed cruel to rank it lower. I don’t know, I find Colin hideously nauseating, and the whole plot is rather ridiculous. I do, however, enjoy the scene where he tells the Wedding caterer how awful the food is at Peter & Juliet’s wedding. All in all, it could have been left out.

8. Sarah, Karl & Michael URGHHHHHH. This scene always infuriates me (I see how this is becoming a trend). I think we can all agree that we would have loved to see Sarah and Karl getting together, especially after the first phone call from her Brother. But no. A sobering reminder of how life forces hard decisions, and how family can be the best and worst things in our life. However, the scene where Alan Rickman tells her to ask out Carl is one of the few times in the film that he doesn’t disappoint. A nice story with a bittersweet ending.

7. Daniel, Sam, Joanna & Carol A hit and miss section. I’m a big fan of Liam Neeson in the film, and his late wife seemed like she would have been a laugh. But the kid is kind of annoying- sorry!! Also, All I want for Christmas is you is one of my least favourite Christmas songs. But it is a harmless plot, and I do enjoy the dash through Heathrow at the end, so it is okay.

6. Jamie and Aurelia This is a bold choice, I know. Many people consider this their favourite section, my parents included. However, I just find it a bit creepy… sorry. There must be at least a 15 year age gap between them, and I guess being a language student makes me skeptical of this “magical” bond that defies linguistic understanding. Also, her jumping in the lake always makes me shiver. But I suppose the ending is quite rousing, and it is sweet that Jamie find happiness after heartbreak. The views of France are quite beautiful, although unfortunately, this has worsened its ranking in light of current events.

5. Harry, Karen & Mia This would be much lower in the ranking were it not for the legendary Emma Thompson and the soundtrack of Joni Mitchell. Heartbreaking. I think we’ve all had our tear ducts tested whilst watching Karen cry it out to Both Sides Now, and then having to pull herself together and endure the further pain of a school nativity, even if it is a version with a sEcOnD lObStEr. It always makes me think of the number of times my parents have had to put on a brave face for the sake of me. However, of course this section is destroyed by Harry & Mia being awful and ruining it all. I also don’t like the discourse where everyone blames Mia; it takes two to tango, and Harry is awful. I guess this also has one of the saddest endings, where Harry and Karen stay together, probably for the sake of the kids, despite her clear sadness.

4. Juliet, Peter & Mark Another controversial choice; I’m aware a lot of people think Mark is really out of order for coming between Juliet and Peter, and whilst I do think his “love” is a bit obsessive, I also maintain what happens is out of his control. I also think he had no choice but to explain everything to Juliet in that iconic final scene outside her house. Extra marks because Kiera Knightley is absolutely gorgeous, and she is also in the greatest film of all time, Bend it like Beckham. Moreover, I guess Mark moves on, and therefore, these people have one of the happier endings in the film.

3. David & Natalie Harmless fun! I think we all agree this section is riddled with timeless moments: Hugh Grant standing up to creepy Billy Bob Thornton (the US President), the dance scene, and of course, the final where they get together. Oh and the absolute best moment, when the kids force the Prime Minister to sing carols, prompting that delightful rendition of Good King Wenceslas. Marks gained because Hugh Grant saying “oh that is so inconvenient” after meeting Martine McCutcheon is such a mood. Marks lost because Natalie is blatantly not fat and so the story-line is a bit draining. Finally, I suppose context has struck again: with Grant seeming like a somewhat competent Prime Minister, this section is a little painful to watch in the current climate…

2. John & Judy Bold I know, given you probably don’t remember this plot. But I do enjoy John & Judy, the sex-scene stunt doubles who engage in such charming small talk whilst simulating sex on screen for most of the film. Also, Joanna Page saying “all I want for Christmas is you” is perhaps the sweetest line in the film. Extra marks because no one gets hurt, and there is a happy ending. Sorry, I’m a sucker for those at Christmas.

And in first place….

Billy Mack & Joe Flawless. Iconic. If you don’t like this part, I absolutely don’t want to hear it. It always cracks me up, every part! From the TV show with “Ant or Dec,” the radio interview where Bill Nighy completely shatters daytime radio etiquette, and of course, the hideous rerecording of Love is all around us, I love every part of this section.

So there you have it: my definitive ranking of Love Actually. Of course, if you disagree, feel free to comment below with your own ranking. And if you have been inspired to rewatch this classic, indulge in it with your loved ones and lots of lovely food. I wish you all a Merry Christmas!