So I have almost been in Italy for three weeks now and despite the dramas of my first week in Siena (see previous post) I seemed to have settled in surprisingly well…don’t get me wrong, the inevitable drama that continuously seems to follow me wherever I go has by no means finished. In fact as you will find out soon from our first trip to neighbouring Florence, it almost seems as if it has only just begun!

But before I tell you all about that, I thought first I would reflect a little on life itself here in Siena. Over the last couple of weeks, I have come to realise that I don’t think I could have come to a place more different to where I spent the last six months of my life in Santiago de Chile…a place where when not travelling the entire spectrum of South America, daily life was characterised by relentless car alarms, the groaning of traffic, city smog, crowds of commuters and in the last few months, the sweltering summer heat… From living amongst a population of 6.3 million to one of just 52,774, the modern metropolis of life in Chile’s capital has been replaced with a life whereby in the space of three weeks, not only has it become almost impossible to walk anywhere within the city walls without bumping into someone you know and stopping for a lengthy chiacchierata; but where one is awoken to the sound of the medieval bells of il Duomo… 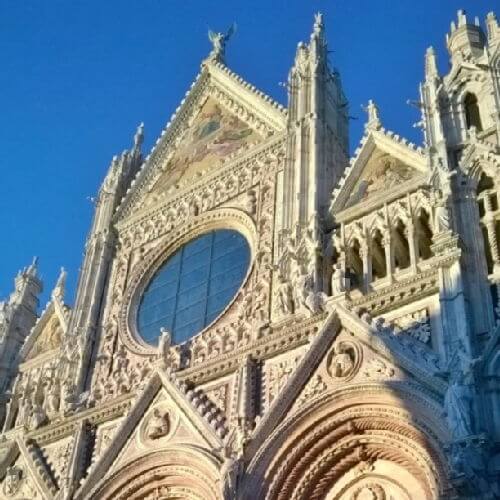 …people greet one another with a kiss on both cheeks, any minor ailment can be cured by a €1 shot of espresso, and where tardiness is not only an expectation, but almost an obligation. In fact, you can pretty much guarantee that even if you leave your home a few minutes after your lecture was meant to have started, stop for a quick coffee and chat to a friend you will inevitably bump into on the way, you will still arrive at your lecture before your professor…I knew my inability to arrive anywhere on time would eventually serve me well…. 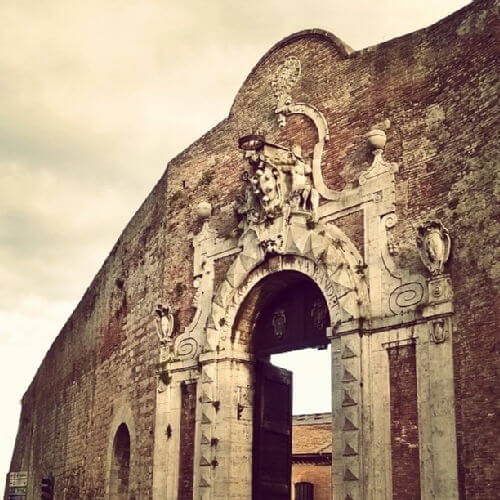 Oh and of course a place whereby (albeit with some difficulty) once you manage to successfully clamber up to your little bedroom window stowed away in the rooftop of a spectacular 13 century building, you are greeted with a view like this…

Yes, as I briefly mentioned before, despite quite literally signing my contract and receiving my keys just hours before my parents departed (along with our temporary accommodation for the week), I managed to find myself a little gem of a place. My rampage through the streets of Siena looking for somewhere to live and kilometres of cobbled streets covered whilst doing so certainly paid off, as just a three minute walk to Siena’s Piazza del Campo, I am currently living with five other Italians in an apartment in which with a little straining of the neck, you can even see the black and white marble stripes of Siena’s stunning Cathedral from the kitchen sink… 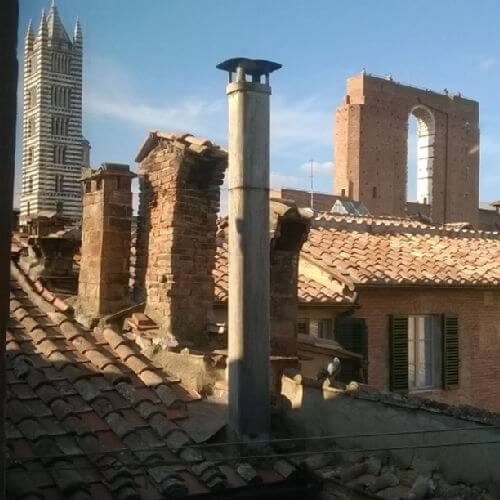 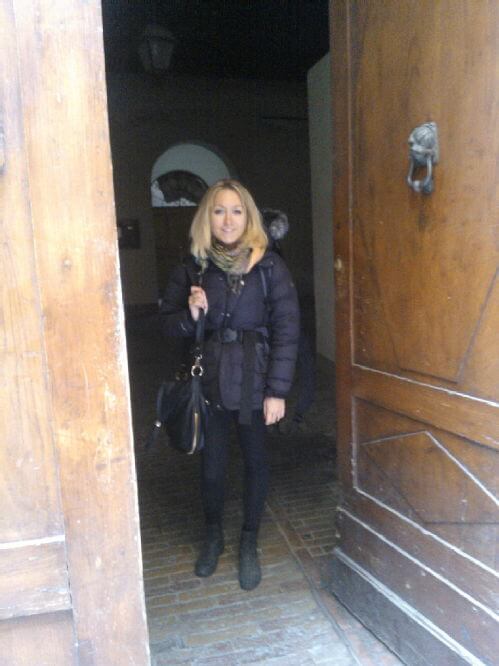 Me and my new front door upon arrival

What’s more, as promised, here is my take on the infamous dialetto toscano. The main and most obvious difference in the Italian spoken here is with regards to the weakling of their ‘c’. Linguistics is definitely not my forte, so let me just put it this way… if one was to ask for this at a restaurant here in Tuscany; ‘Una Coca-Cola con un cannuccia corta’ (a Coca-Cola with a short straw)…it would sound more like this…’Una hoca hola hon un hannuccia horta.’ You get my drift?

I must also add that the Italians themselves certainly live up to the openly warm stereotype attached to their character. For example, the day I moved into my flat, in search of a lightbulb, I asked a man standing having an expresso at a bar if he knew where I would be able to find one. Not only did the man after downing his shot of coffee take me to the shop itself and carefully examine every light fitting in search of the right one for me, but after accepting that the most ideal and cost-effective lightbulb for me wasn’t there, he told me that he might have one at home. So this man who minutes earlier had been a complete stranger to me, not only went home in search of a lightbulb, but told me he would bring a couple and leave them with his daughter at the bar (which he coincidently owned) later that day. I could then go and pick them up from her, take both home, decide which one I wanted and then take the other back with some money for the lightbulb I decided to keep the following day…now would you get that in England?! 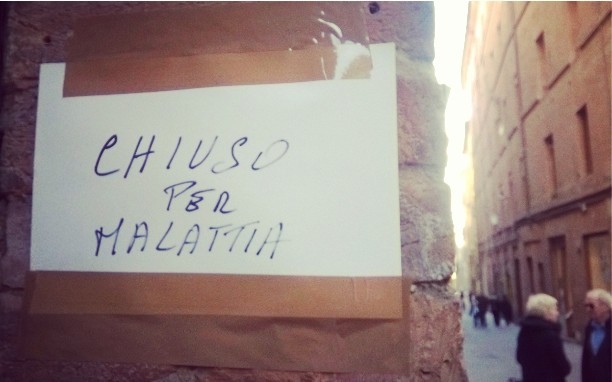 ‘Closed because of illness’…Only in Italy. I can also confirm that the stereotypical hypochondriac tendencies of Italians are often very true.

With regards to university life, aside from having got absolutely hooked to something called MENSA (a university cafeteria dotted around Siena where most Italian students eat every night/lunch rather than cooking as it’s cheap, easy and good for socialising, and where a meal including a starter, main, dessert + fruit + unlimited drinks would cost around €4); I am still in the process of sorting out my courses and navigating my way around the labyrinth of cobbled streets to my classes. The other day when trying out a course, I even found myself sitting in part of a church, surrounded by frescos, listening to a two hour lecture on medieval history…I can definitely confirm that the whole experience was rather surreal. 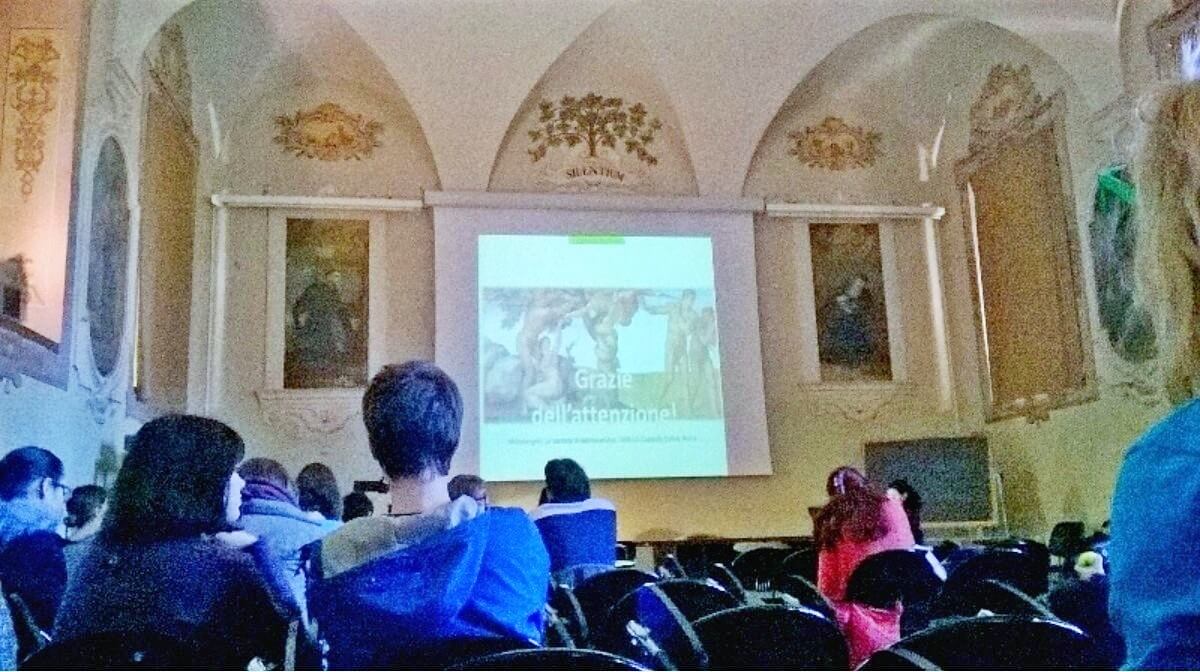 Not bad surroundings for a lecture

Oh and I almost forgot to mention that we had an earthquake. Yes, another one! I thought I had left all those earthquakes in South America, yet within two weeks of me being here, (albeit rather small in comparison to those in Chile) sure enough we had another…3 earthquake of the year abroad, not bad I’d say. And whilst on the subject of earthquakes, on a side note, remember good old Volcán Villaricca? That slightly ‘demanding’ 2,860m climb to its crater we did last October in Pucón, Chile?

How could we forget this

Well as it so happens, last week it exploded. 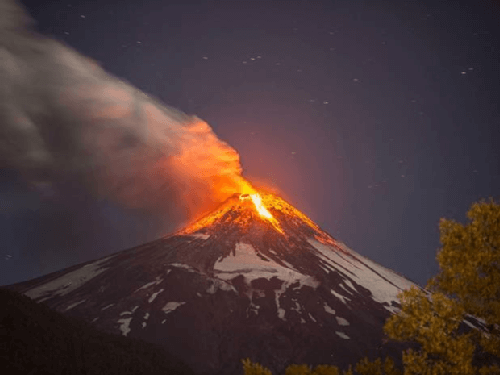 I told you I attract drama wherever I go!

Yep, if you don’t believe me take a look at it here.

Anyway, back to all things Italian. 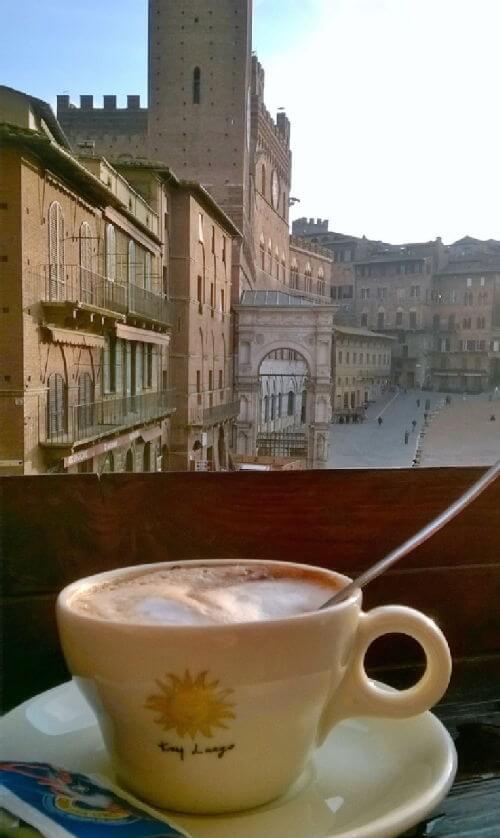 And so with university life underway whilst slowly sinking into the laid back nature of Tuscan life, whereby I am wholeheartedly embracing the ingenious concept that is the Italian aperitivo, along with the fact that a truly authentic cappuccino is possible for just €1.30, I thought the first trip of the semester was most definitely called for. Therefore, to Firenze, the capital of Tuscany itself we went…