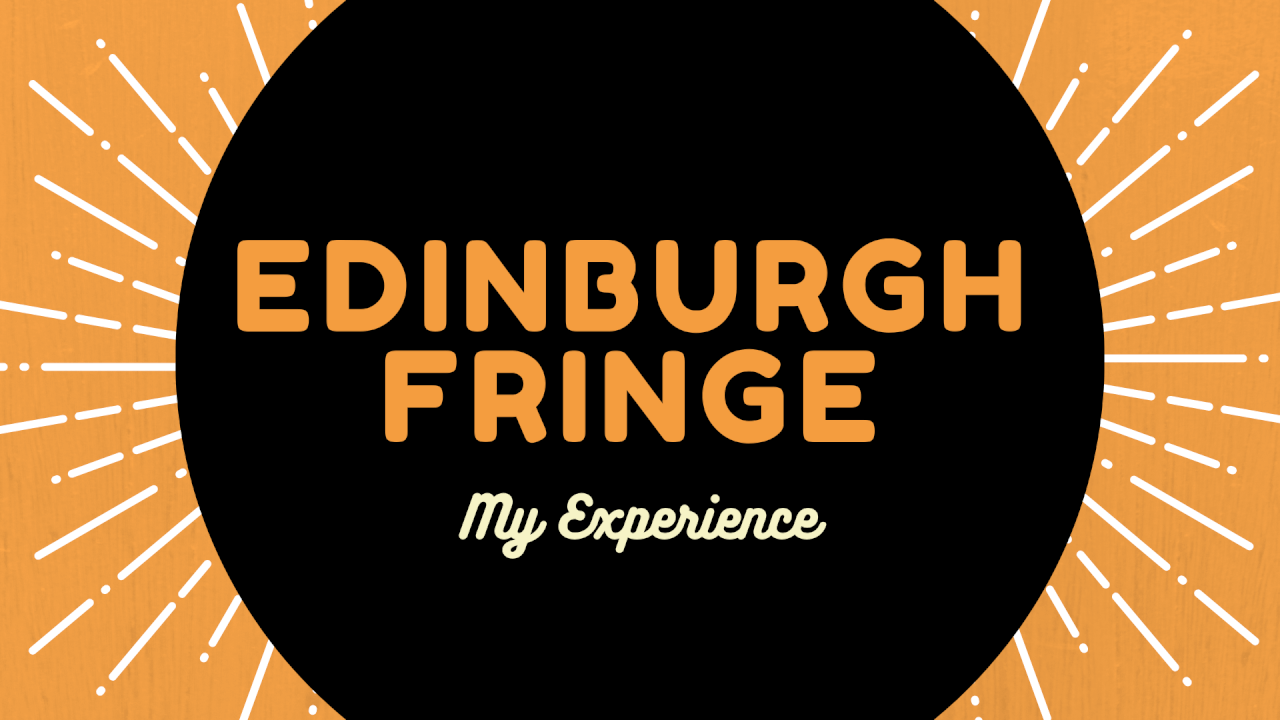 At this time in any other normal year, millions would be about to flock to Edinburgh for the Edinburgh Fringe, a month-long festival of theatre, comedy & performance, and a highlight of many theatre people’s years. Obviously (and very sadly) the Fringe has been cancelled this year due to the pandemic, so I have decided to revisit my experiences from last year and share some of my memories from the Fringe 2019.

I spent a week at the Fringe last year acting in a show called Le Monocle, a student written piece about a lesbian bar in pre-WWII Paris. That year, we were one of 5 independent Warwick student companies at the Fringe, with the various Warwick shows stretching the whole month of the festival. There were 7 of us acting in our show, including 3 English & Theatre students, a trainee Doctor and a German Studies postgrad, alongside our director and producer. The week was absolutely insane in the best way possible, and was definitely one of the best experiences of my life! While it would be impossible to cover every aspect of the week, I have tried to summarise the key parts of the experience to give an idea of what it was like for me.

All 9 of us shared a little flat about 15 minutes away from our venue in a fairly quiet part of Edinburgh. As you can imagine it was quite a tight squeeze, especially with various partners coming and going throughout the week, and we regularly had one or two cast members sleeping on the floor in the common area. However, the flat was lovely and as a cast we all got on really well, so it actually wasn’t that bad in the end! It also helped that most of us were out for the majority of the day, and we would often only all be together in the mornings and evenings. The biggest difficulty was working out who would take the two keys we had between the 9 of us, which resulted in a few stressful moments, but nothing we couldn’t work out!

One of the best things about performing at the Fringe was that we could use our pass to get into any show in the same venue group for FREE, meaning that we managed to see dozens of shows without paying! While we did shell out for some must-watch performances, such as a drunk version of Macbeth and a drag variety show, most of the shows I saw that week were totally free, which was amazing as most shows cost £6 or more. I tended to see about 5 shows each day, although one of my cast mates averaged at around 7 or 8!

While some of the shows were not so great, I did see some incredible ones, including a one-woman show about a South African couple, a musical about a woman who believed she was a witch, and a Russian classical orchestra. There were also a lot of free events in smaller venues across the city, and one of my favourite memories is spontaneously wandering into a bar with a friend on our way back after seeing a show one evening and finding a very absurd comedy show, where we also happened to run into some other Warwick friends! Having these opportunities to see such a wide variety of performance really was incredible, and is an experience that I am so thankful for getting.

My Fringe pass and tickets from (some) of the shows I saw:

While getting a good sleep was important, we also had several nights out in the bars and clubs of Edinburgh. On the first night we stopped by several LGBTQ+ bars to try and give out a few flyers and get some people coming to our show. A few of us also went out clubbing on a couple of nights, trying out the famous Hive Till Five club (although sadly we didn’t make it to 5am) and to another place later in the week. This is probably the part I wish I had taken more advantage of, although balancing it with sleep, seeing shows and flyering can be surprisingly difficult!

The Fringe is infamous for it’s non-stop handing out of flyers (aka flyering) and of course we were no different! Our show took a more relaxed approach to flyering than many, generally involving 2 or 3 of us flyering for a few hours before our show started. Like most, we stuck to The Mile, a huge street in Edinburgh littered in people flyering – and littered with a lot of discarded flyers too. At first I was quite nervous about flyering, but eventually I got the hang of it. One of the funnest parts was seeing some of the interesting tactics people took to grab everyone’s attention, including singing, costumes, and an astronaut space-walking through the crowds! This was also a great place for bumping into friends from Warwick, although at one point it took me a few moments to realise that the giant monkey mascot hugging me was actually someone I knew!

Last, but certainly not least, were the actual performances we did. While our audiences varied hugely, including one night with just my family and a reviewer, every show was fun to perform, and each of them succeeded in their own different ways. A year later I still find the fact that I somehow managed to get into a Fringe show absolutely insane, and I am so thankful that I got the opportunity to perform in one.

Our biggest struggles with performing were mostly around the space itself. Firstly, it was a lot smaller than we had rehearsed with, and fitting all 7 of us onstage with our ‘bar’ was quite a tight squeeze! Secondly, we had exactly an hour to do our show, including putting the set together and dismantling, which resulted in a very disgruntled puppeteer whenever we ran behind. Finally, our show in our (incredibly un-sound-proofed) room happened to coincide with a musical piece next door, meaning we often had some very upbeat music playing during some quite emotional scenes! Despite these, we managed to pull off our show every night without anyone falling off the stage, which was definitely a win in my opinion!

The performance that sticks in my mind the most was our second night, when we arrived at the venue to be informed that there was a power cut in our space so we couldn’t perform there. We then got relocated to a massive tent nearby with no backstage, no lighting and no real seating for our audience. Despite all that, the night turned out to be my favourite performance, and the funnest one of them all. Part of this was due to the fact our first night hadn’t gone so well, so having the pressure to put on a technically good show removed meant that we all felt much more relaxed and less stressed about getting it perfect.

Us before the performance in our tent:

Overall, my time at Edinburgh was amazing, and one that I am incredibly thankful to have had. I am very sad to not be going to the Fringe this year, and am definitely hoping it will be back next year to visit! I would definitely recommend going to the Fringe if you can, and I certainly plan to return as an audience member for many years to come!