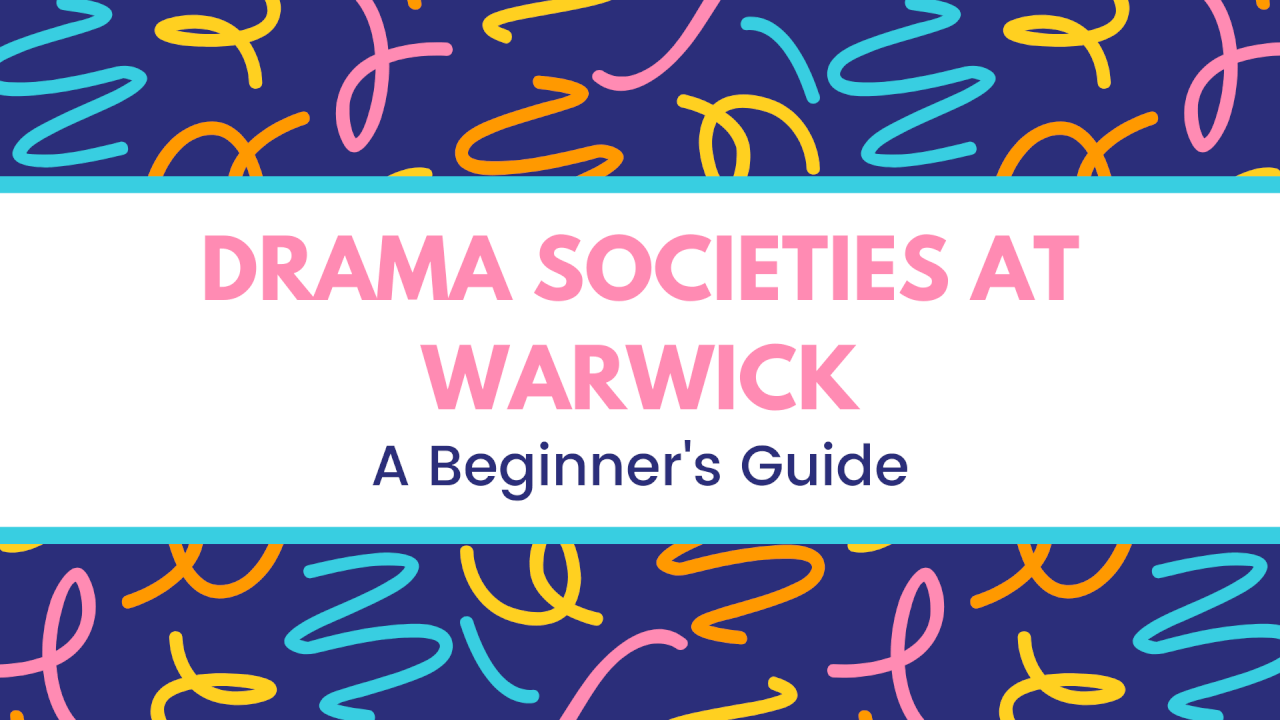 One of my favourite things at Warwick has been getting involved in the drama societies here. Not only have they allowed me to gain experience in all facets of putting on a show, from producing through to acting, but I have met many amazing and incredibly talented people who I wouldn’t have met otherwise!

With 38 societies currently listed under the ‘performance’ tab of the SU’s society page, it can sometimes feel a bit overwhelming trying to work out where to start. However, there is a group of societies, often referred to as ‘Warwick Drama’, which interlink and function in similar ways, generally involving some aspect of acting/performance. Here, I have outlined these societies, including what they do and how you can get involved! One of the brilliant things about Warwick Drama is that you don’t have to stay loyal to one or two societies and can often attend socials, workshops and auditions without buying a membership first, giving total freedom to pick and choose whatever events you want! It is important to note that these societies are always evolving as new exec take over, so you may find that the societies activities do change a bit each year. Also with the current COVID situation, many of the regular society events will be disrupted or changed this year compared to previous years.

What It Does: The main role of the DC is to facilitate the Warwick Arts Centre studio shows each term, providing support for the teams, organising panels to decide which shows are put on, and liaising with the Arts Centre staff. It acts like a facilitator, allowing it’s 4 member societies to pitch and put on shows. The DC also organises events like the Fresher’s bar crawl and drama ball, two amazing social events that bring all of Warwick Drama together!

Getting Involved: Anyone can audition for one of the studio shows or be involved in a behind the scenes role in a production – keep an eye on their Facebook Opportunities group for these. The bar crawl and ball are also open to everyone, even if you’ve not been involved in any shows, and are a great way to meet people involved in the societies!

What It Does: One of DC members, and one of the biggest drama societies at Warwick, WUDS runs socials, workshops and shows for its members, focusing on scripted plays. As well as allowing Arts Centre submissions, WUDS holds fund slots for smaller performances in campus spaces, drinking and non-drinking socials, workshops, and runs a tour where members visit a country for a few days. They have also started running a Fresher’s play, where freshers can direct, produce and act in a play supported by the WUDS exec.

Getting Involved: Anyone can attend WUDS socials, shows and workshops, and there are regular opportunities to be involved in their shows, both acting and behind the scenes. For freshers, the Fresher’s play is not to be missed, and is an amazing way to make friends who you will likely see throughout the whole of your time at Uni!

What It Does: Another member of the DC, Freshblood New Writing focuses (unsurprisingly) on new student writing. They have hosted scratch nights where people can see their work staged and receive feedback, workshops looking at different facets of writing, and drop-ins where writers can casually discuss their ideas with Freshblood’s dramaturg. Members of Freshblood have also been involved in Arts Centre shows, as well as Freshblood’s own fund shows performed on campus. In second term Freshblood often holds a festival of new writing, FreshFest, where six new plays are put on over the term and performed over a few evenings, providing a great opportunity for new writers, directors and producers.

Getting Involved: Freshblood’s scratch nights, workshops and drop-ins are free to attend. They also put any opportunities to audition or submit a show on their social media, and advertise FreshFest over the summer and first term.

What It Does: Codpiece is the third DC member and possibly the most broad-reaching of the drama societies, welcoming more experimental work alongside classic show formats. The society’s focus is on devised and adapted work, but they are also open to installation work, spoken word pieces, physical theatre, and performance art. As well as the Arts Centre opportunities and their regular fund shows around campus, Codpiece has recently started accepting one-person show submissions, giving support to performers who would like to experiment with their own art but don’t need a large team. The society also hosts workshops and an event called ‘Bacchus’, a more relaxed scratch night where people can perform pieces they’re working on or discuss ideas they are interested in developing.

Getting Involved: Workshops and Bacchus are free to attend, and welcome all disciplines and ideas, no matter how unconventional. They also advertise their auditions, performances and opportunities to submit shows on their social media.

What It Does: The current newest addition to Warwick Drama and the winner of ‘Best New Society’ at the SU Union Awards, BAME Creatives was set up in 2019/2020 to work on improving diversity in the theatre and bringing a new audience into Warwick Drama. While it is not a member of the DC, BAME Creatives has still put on an Arts Centre studio show in collaboration with WUDS and has been given a slot to put on another in Spring 2021. As a new society BAME Creatives is still developing, but has so far run a showcase involving singers and spoken word artists, and organised workshops and socials. They also hosted a weekly radio show on the University’s RAW radio station where they discussed BAME people in the Arts.

Getting Involved: BAME Creatives hopes to run more showcases in the coming year, so keep an eye out for those to either attend or get involved with. Their workshops and socials are all free for anyone to attend, and they often post opportunities both at Warwick and outside the University on their Facebook page. They are also aiming to get another radio slot in the coming year, so have a listen for that as well.

What It Does: MTW focuses (again, unsurprisingly) on musical theatre. The society is very active, and regularly has opportunities for people to get involved. Although they are not part of the DC, MTW usually puts on a show in the Arts Centre main theatre and a smaller show in the studio each year. The society also runs Improv Musical, where performers improvise a musical based on audience suggestions, regularly taking the show to the Edinburgh Fringe where it receives great reviews. They have also run regular classes, showcases, light-hearted fund shows, and a festival of new musical writing. MTW also runs both regional and international tours, visiting cities in the UK and countries outside!

Getting Involved: The society’s Ensemble workshops are open to everyone, and they regularly post opportunities to audition and submit shows on their social media. Their socials are open to everyone, and they have a football team, Off-Side Story, for anyone interested in sport! It is worth keeping an eye on their social media for information about all upcoming opportunities.

What It Does: ShakeSoc focuses on plays by Shakespeare and his contemporaries, as well as running socials and workshops. The society aims to put on a fund show each term, allowing work from the period or writing based around Shakespeare and his plays to be performed. They also put on more light-hearted shows throughout the year, such as Sh!tf@ced Shakespeare, where a shortened version of a classic Shakespeare play is performed with minimal rehearsals and one (or more) drunk cast members, and WUDS in the Woods in collaboration with WUDS. They have also run socials to see shows, and occasionally movie nights and workshops.

Getting Involved: ShakeSoc shares all their auditions and show submissions on their social media, as well as opportunities to get involved in their socials, workshops and more lighthearted performances. Again, keep an eye on those for information about anything coming up.

What It Does: While not technically a society for acting, Tech Crew is still very involved in Warwick Drama, and makes up the final member of the DC. Tech Crew is responsible for providing the tech for all Arts Centre shows, both studio and theatre, and often does the tech for fund shows as well. They run training sessions throughout the term teaching people in areas such as lighting, sound and set design, and run socials throughout the year. They have also collaborated with other DC societies for Arts Centre shows that require specific technical elements, contributing to the budget and providing more intricate tech for these shows.

Getting Involved: Anyone can attend their free tech training and their socials. To be involved in designing and running tech for shows you have to be a member, and these opportunities are sent out in their emails. Members can also help out in get-ins for Arts Centre shows, where the space is set up ready for performance.

The societies below are ones that, although they often overlap with the societies above, tend to be less entwined with the rest of Warwick Drama. I have also personally had less experience with these societies, so can’t fairly write about them – however, they are definitely worth checking out if you’re interested!

WITS focuses on improvised theatre and holds weekly sessions both for those who want to improve their improv skills and for those who just want a bit of fun. They also have a troupe who perform regular shows at Warwick, with auditions at various points throughout the year. This culminates in the summer where they have taken WITS to Edinburgh Fringe to perform, getting good feedback from their audiences. They also hold regular socials throughout the term.

The Opera society is a close-knit society that focuses on opera. They put on a show in both the Arts Centre theatre and the studio each year, which anyone can audition for and contribute towards. They also run socials and workshops throughout the year.

The Pantomime society puts on pantomimes throughout the year (not just at Christmas!). The society prides itself on its policy of giving everyone who auditions a part, making it an inclusive society and a great place for anyone nervous about being rejected. Throughout the year they run various socials for anyone to attend.

The Classics Society, while not technically a performance society, puts on one show a year in the Warwick Arts Centre theatre, performing a classical play. This can be an amazing opportunity for those who are less interested in singing to perform in the main theatre of the Arts Centre, and the society has put on a wide variety of classical shows.