Coming Late To A Society – OurWarwick

Coming Late To A Society

Hi there, people! I’ll be talking a bit about uni life today. There are hundreds of societies at Warwick; one of the ones I’m involved in is Warwick Labour, for which I only really started attending events in Term 2. Rocking up late in the year can be quite intimidating, but in my experience it’s never too late to get involved! If you want to hear more about engineering stuff, check back in a few days for my report on the upcoming Energy Conference (tomorrow at the time of writing). I’ll also point you towards my colleague Jane Chan, who’s recently begun her own blog. Go read her stuff!

One of the big events in Freshers’ Week is the Societies Fair, where people from the (literally) hundreds of student-run societies lay out their stalls to suck in new recruits. If you’re anything like me, you’ll walk round, sign up to a couple of socs (some are free to join, but there’s a one-off fee to be paid each year to join any), get on 87 mailing lists… and never go to a single event for most of them. But you’ll still get the emails, or maybe you’ll be on the Facebook page where the events are organised, and you’ll see something that makes you think, “Hey! I’d go to that! But is it too late?” Welcome to me, last December.

I’d signed up for Warwick Labour at the start of the year, but never really got involved. But I saw that there was a campaigning trip for the Oldham and West Royton by-election, and I decided to tag along. I found the organiser on Facebook, and asked if I could come along. Within minutes, I had a reply. In fact, I had a very lovely message saying that of course I could come along – so that Sunday, I walked up to the interchange and, a bit of Facebook stalking later, went over to a suitably-sized pack of second-years and asked, “Are you guys Warwick Labour?” Luckily, the answer was yes.

It was a two-hour train journey to Manchester, and I spent most of them getting to know these lovely new people. I’m honestly not sure what they thought of this somewhat nervous fresher, whose first event was campaigning in a nationally important by-election. Myself, I was somewhat terrified of canvassing for the first time, especially when my companions said they’d been campaigning even before uni! “It’ll be fine!” they reassured me. “The first door is the worst!” In fact, they were totally correct. I must have knocked on dozens of doors that day (it would have been more if it weren’t for the rain) and, despite the yellings of a man in a van somewhat unimpressed by Jeremy Corbyn’s leadership, it was a great experience. Since then, I’ve been involved in loads of campaigning, both at home and uni, but it started here. I honestly feel it’s done wonders for my self-confidence – if you can knock on a stranger’s door and ask them how they’re voting, you can do pretty much anything! 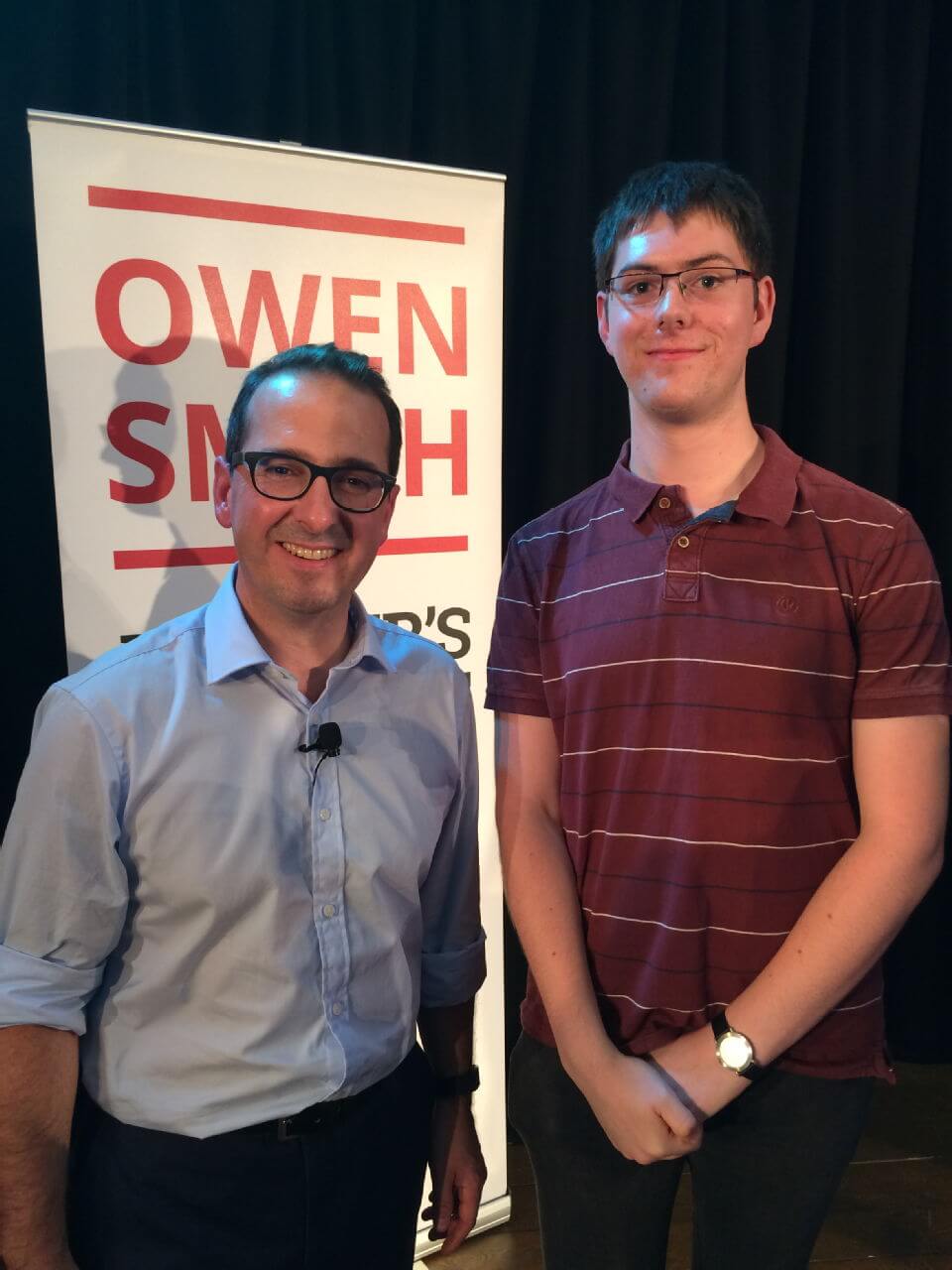 Here’s me meeting Owen Smith in the summer of 2016, when I attended a talk he gave as part of his leadership challenge. He made a joke about our relative heights!

Thiis was only the start of my involvement with Warwick Labour. Since then, I’ve attended policy discussions, pub quizzes, Labour-themed pre-drinks, karaoke, and on-campus campaigns. Along the way, I’ve met a truly fantastic group of people who’ve enthusistically accepted a lone engineer into their midst! If any of you are worried about signing up to things straight away, worry not! It’s perfectly natural to want to take a couple of months to find your feet before you throw yourself into things. Take your time, get your handle on uni life – then find a society or two to have those experiences that make it so great!

That’s all for now; I hope this provides some reassurance about getting settled into society life at Warwick! As always, feel free to leave a comment below. Until next time!