Wow so I have been in Chile for nearly a month now, so much has been happening I’m not sure where to start.

I suppose I should start with University…

After two weeks of dipping in and out of different classes to see what tickled my fancy (and when I say this what I really mean is what classes I could realistically manage and most importantly what teachers I could actually understand) I officially signed up for my courses last Thursday.

This in fact involved making a trip to one of the other campuses, Campus Oriente despite having chosen classes at the main campus, San Joaquin (this was primarily down to practical reasons, reasons which were confirmed to me after having to take numerous busses and metros due to me missing my stop trying to get myself there). 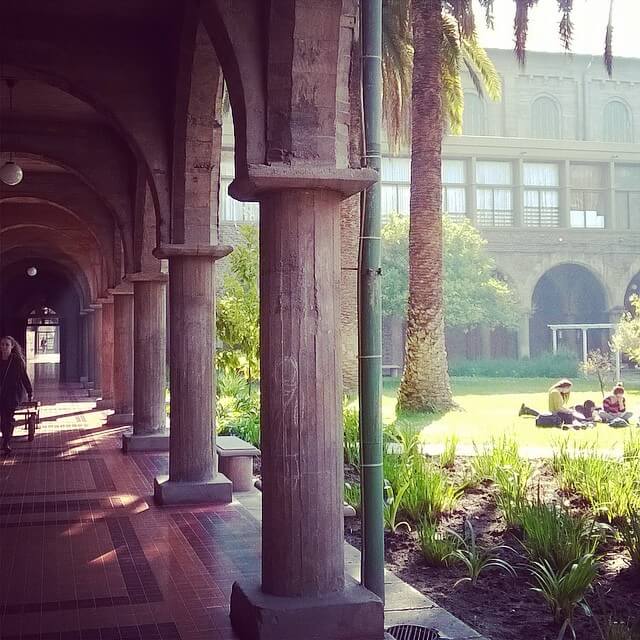 The arts and drama based campus, Campus Oriente 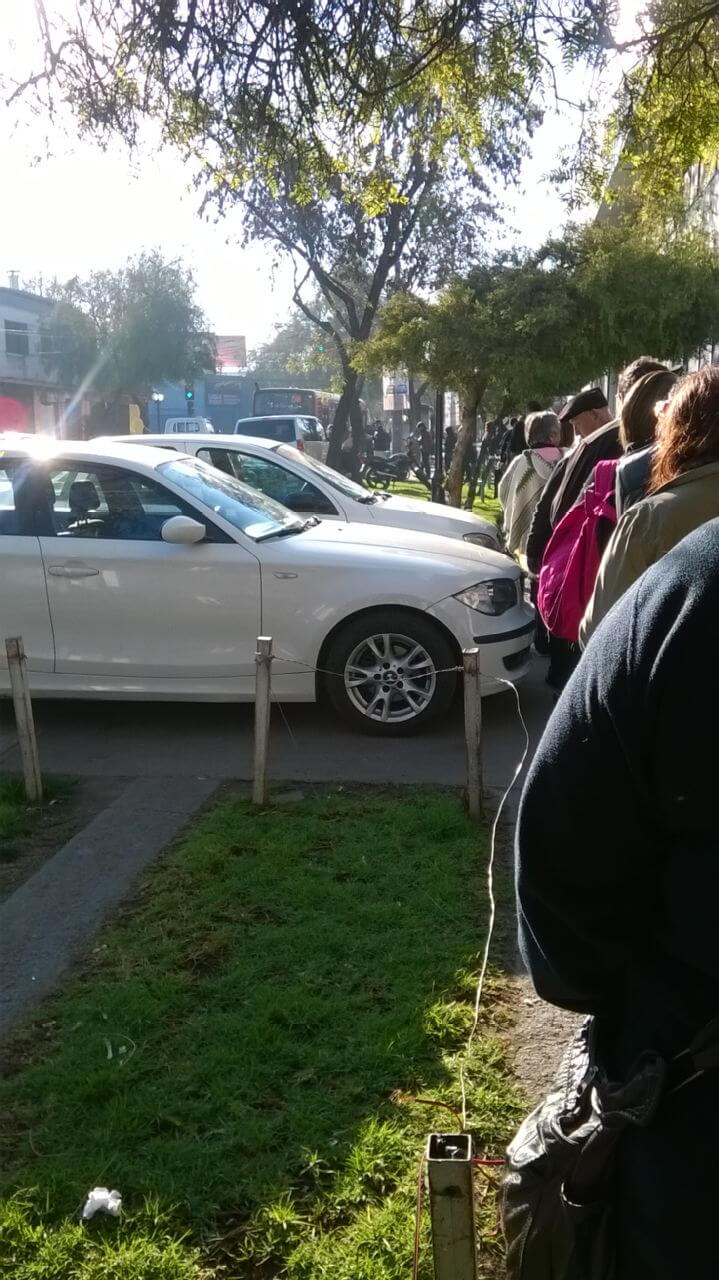 My first experience of Chilean busses…look at the queue! And yes it seems it is physically possible to fit this many people on one average sized bus as I found out for myself whilst gasping for air…

Nevertheless, classes now sorted I am slowly getting used to my new timetable consisting of: ‘Introduction to Contemporary Art’ : a class whereby not only am I the only international student but it seems the teacher talks at approximately 100mph- believe it or not during our taster week I actually experienced worse…‘El cuento hispanoamericano’: my favourite class taught by the most adorable old Chilean man who speaks relatively slow and whose frequent repetition and emphasis of certain phrases and important concepts is proving invaluable to my ability to follow and take decent notes. And finally ‘mujer y sociedad’: this class is a special class offered only to international students and focusses on the history of women in Chilean society. Despite one of the teacher’s incredibly strong Chilean accent (I don’t think she pronounced a single ‘s’ in our last lecture) and ability to induce terror amongst us exchange students, it is actually really interesting and a great opportunity for me to learn some Chilean history and culture. For example yesterday I learned that just seven years ago, Chiean women were still not allowed to vote in the same place as men!

University aside, I also managed to experience for the first time Chilean healthcare. 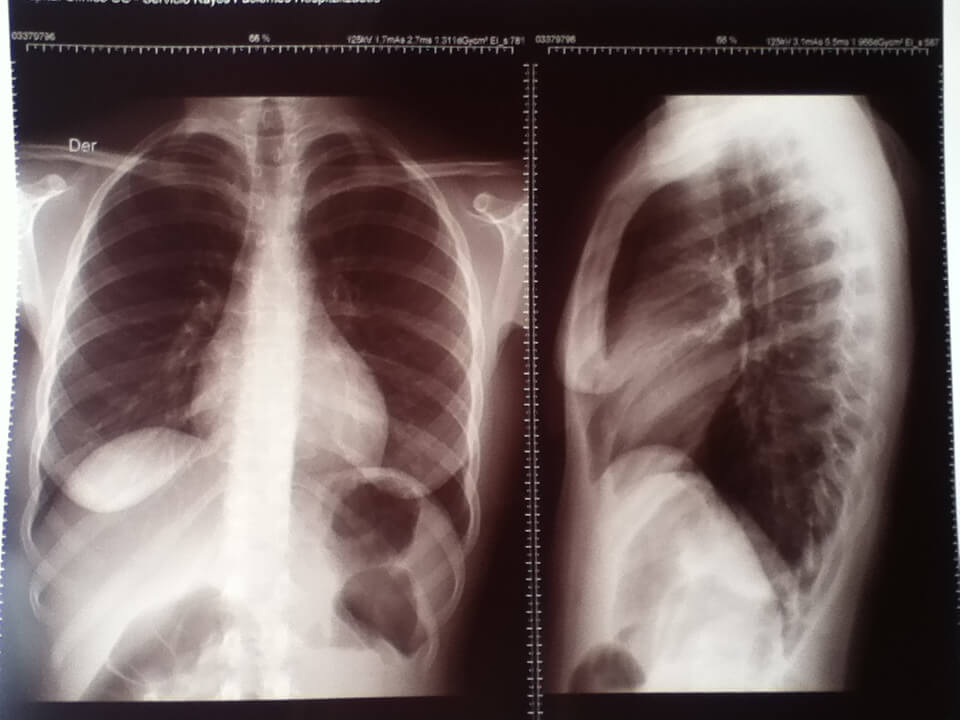 At least I now know where the nearest hospital is…

Yes, having been suffering for three weeks now with what I just assumed was a bad case of Chilean fresher’s flu, and with my cough seemly becoming increasingly worse, Tuesday I decided to finally see a doctor. Well it turns out that I actually have ‘bronquitis aguda.’ Yep, I have managed to get a form of acute bronchitis caused apparently by a Chilean parasite…nice. However, there was also a possibility it could be pneumonia, which is how I found myself in hospital having a chest scan. Oh and whilst all this was going on, myself along with all of my flatmates managed to get food poisoning…big time. Apart from that, all is well!

Plaza Italia with San Cristóbal in the distance

Despite all of this and on a more positive note, last weekend my flatmates and I ventured on our first trip to Cajón del Maipo. Situated only about an hour and a half away from Santiago, it is a canyon located in the Andean southeastern portion of the Santiago Metropolitan Region. 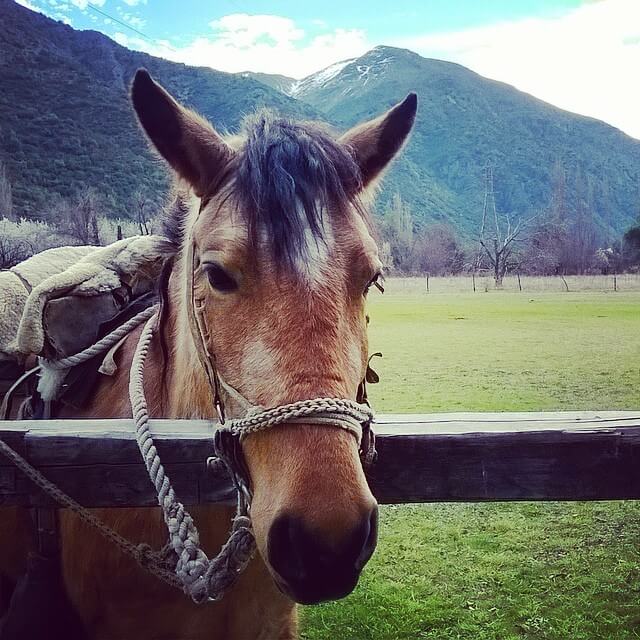 Having found a cabin to rent for the weekend situated quite literally in the middle of nowhere, horse riding through the mountains was first on the agenda and quite possibly one of the best things I have ever done.

Having explored the nearby towns of San Alfonso and San José, on our last day we arose early for a trek up to a glacier. I should probably add that at this point I was unaware that I was actually suffering from a form of acute bronchitis and at the time put my shortness of breath, coughing and immense tiredness as we climbed for a good few hours through thick snow down to the fact that I hadn’t been to the gym for over a month! Nevertheless despite never actually making it to the glacier (after a lunch stop a man coming the other way said there was too much snow ahead to reach it which would require another 3-4 hours at least), the views were spectacular. 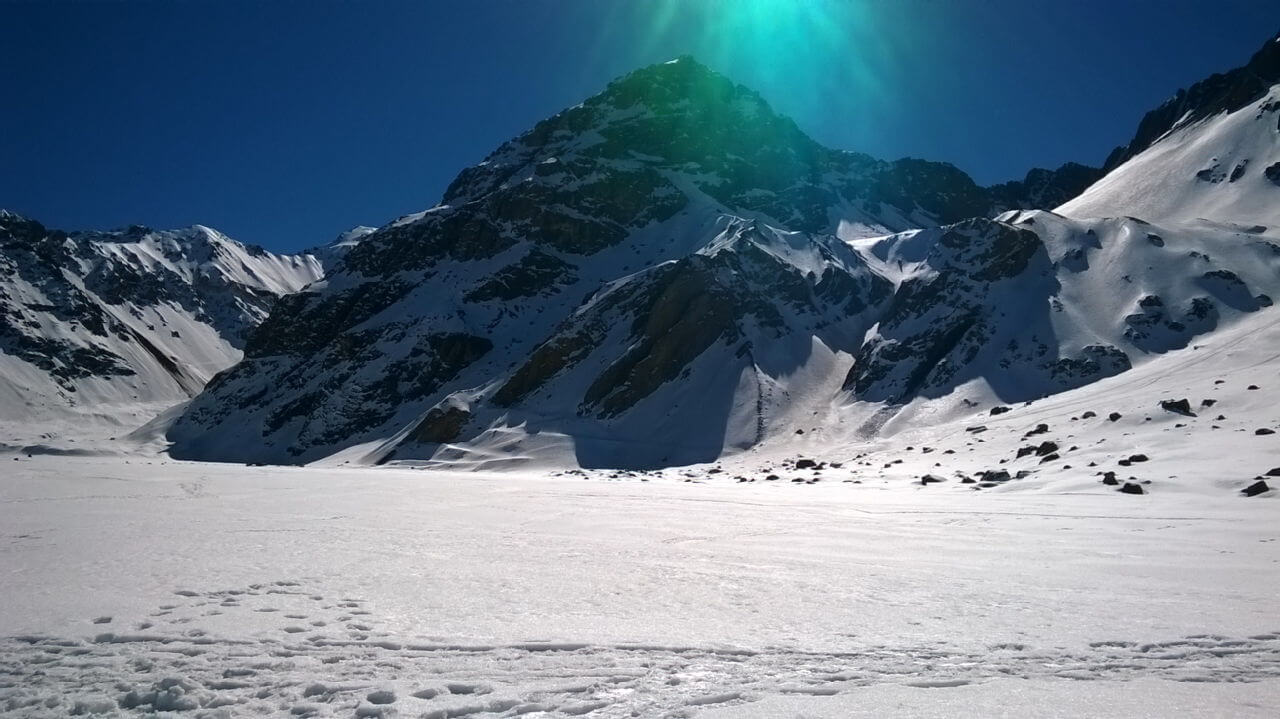 We even found this on our decent… 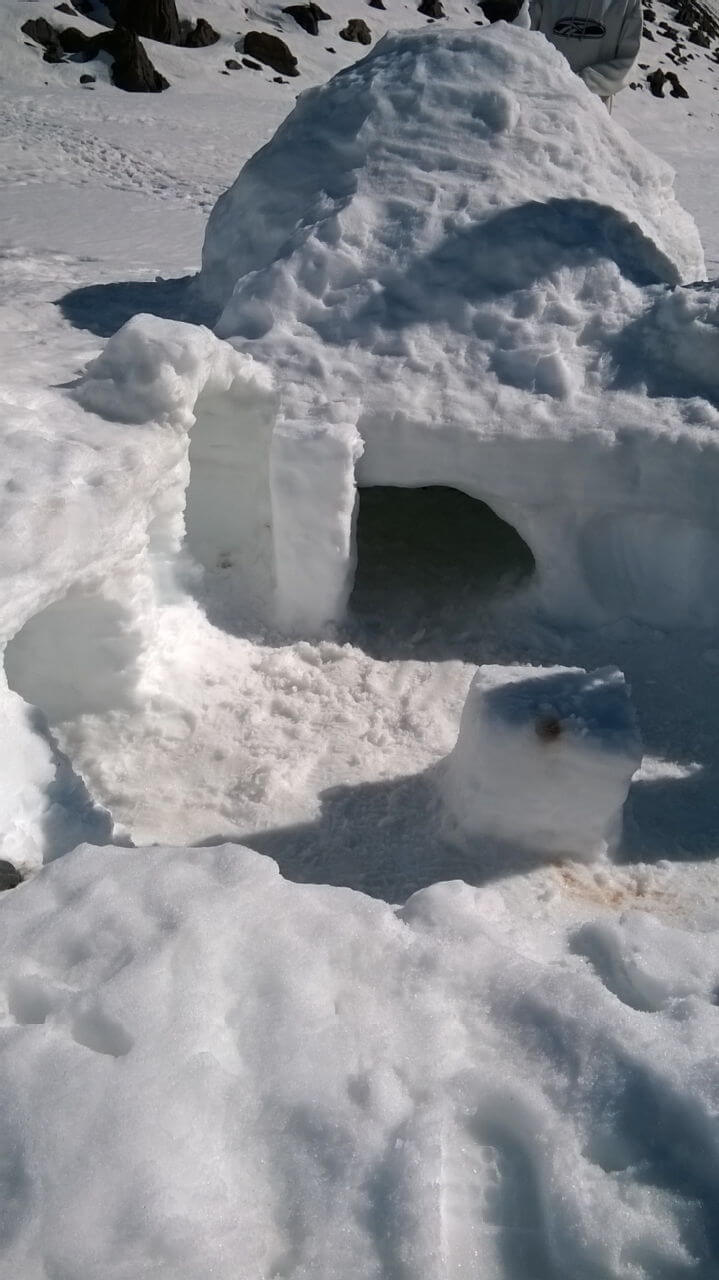 I can now officially say that I have been inside a real igloo!

Selfie in an igloo!

Extreme camera skills from the guy who took us

In spite of a tiresome journey home which involved a seemingly neverending bus journey of well over an hour during which we were standing and once again squashed like sardines before connecting back onto the metro, it was a fantastic first trip.

The weekend before, we also took a four hour free tour of Santiago… 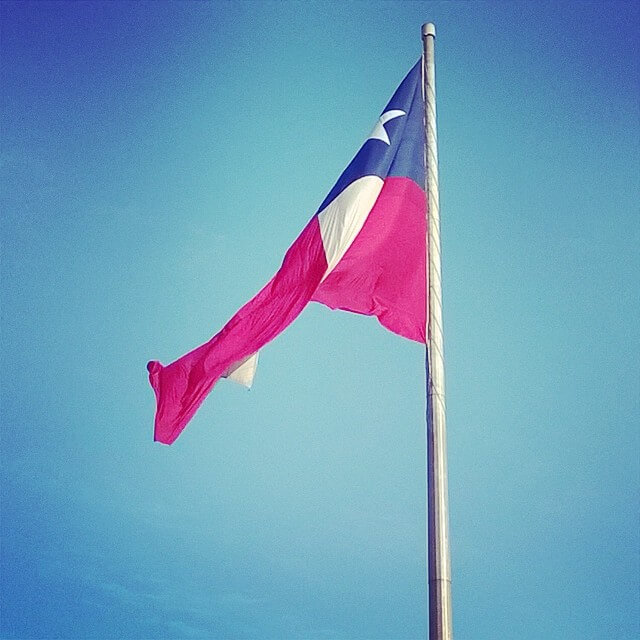 The biggest flag in Chile 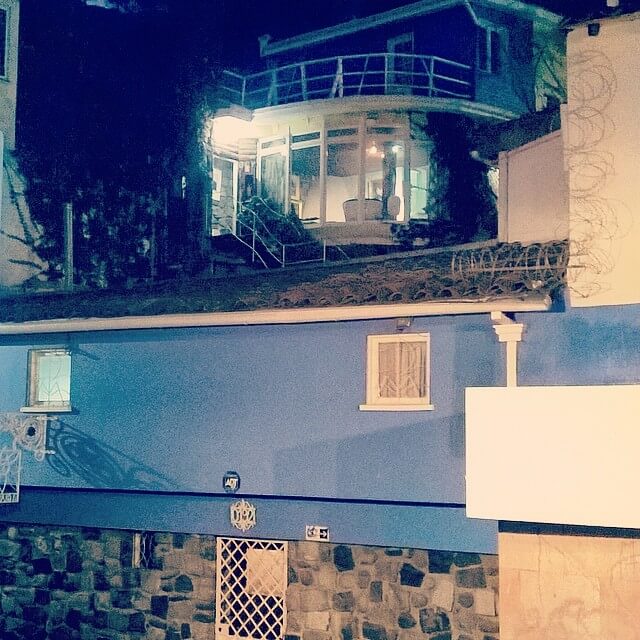 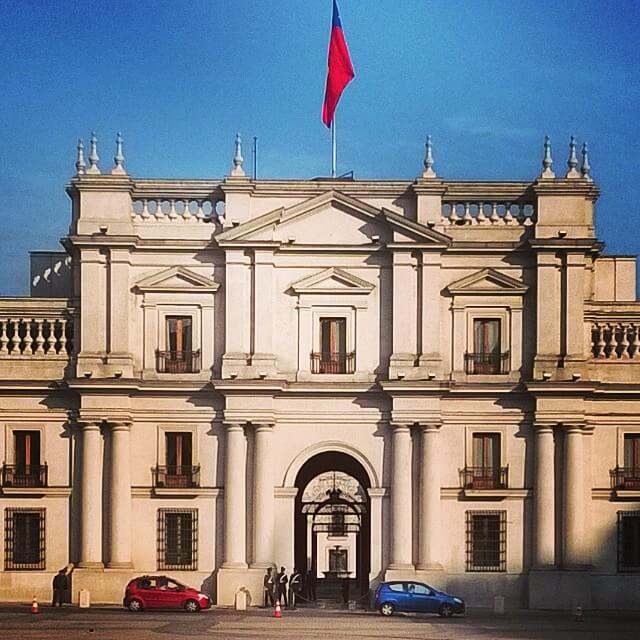 I still sometimes find it hard to believe that I am actually here in Chile. And despite the absolute nightmare that was sorting out accommodation during my first week here whilst staying in a hostel (I found out that my original arrangements fell through the night before I was meant to move in), what I like to call my extreme case of Chilean fresher’s flu, the fact that central heating simply doesn’t exist and consequently having to sleep in my coat and gloves on several occasions, the abundance of avocados everywhere (I even found earrings with dried avocado in them!!) and of course the huge confidence knock with regards to my Spanish (or ‘Castellano’ as they prefer over here) due to the Chilean accent, I am still alive (just about) and surviving life over on this side of the Atlantic. 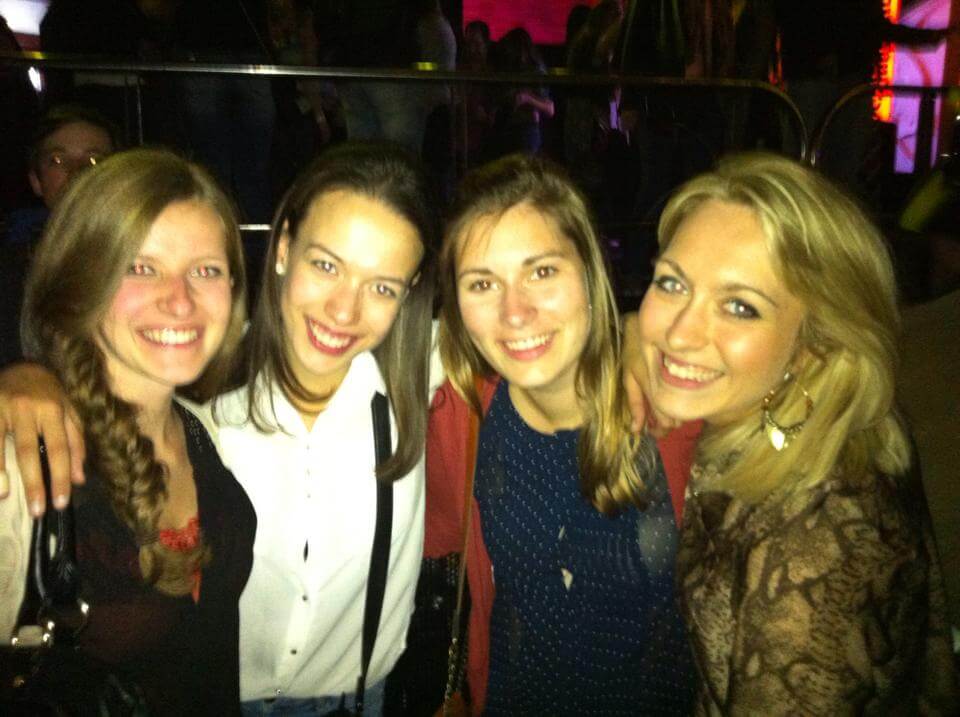 Miercoles Po’…the international students’ night out whereby foreigners and girls get into the clubs for free (this is actually the case for the majority of places most of the time). 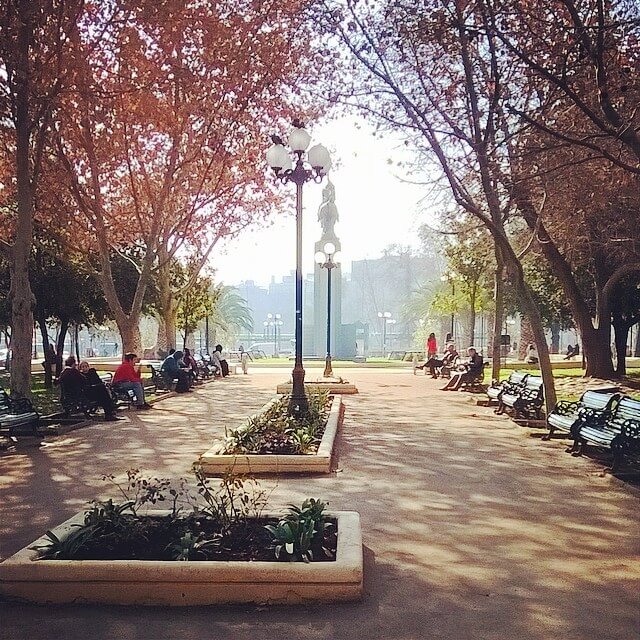 Parque Bustamante (just down the road from where I live) and next to Plaza Baquedano (formely known as Plaza Italia)- the focal point of celebrations and riots in Santiago. Today I was actually awoken to the sound of drums as protesters and Chilean ‘carabineros’ began to congregate for yet another demonstration.