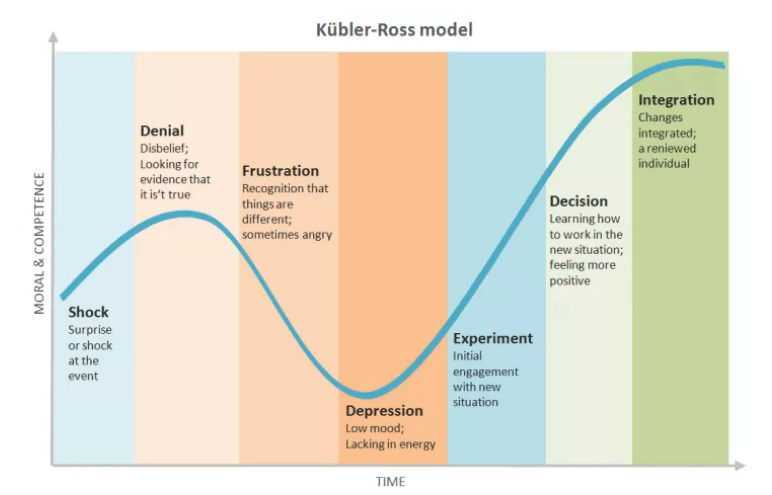 I learned a lot about myself over the past month.  I spent the first two weeks of jury service in a state of shock.  You are suddenly whisked away from your daily life, against your will, to listen to something that does not otherwise involve you and determine someone else’s fate.   You are given the telephone number for the Samaritans, but apart from that there is no support for any emotional and mental upheaval you will experience.  Thankfully, mine was a non-heinous crime and I could (generally) sleep at night, apart from Sundays when I was restless till the early hours and exhausted on Mondays.

During an evening of self-reflection I remembered the Kuebler-Ross change curve, which gave me a visual reminder that this was only a temporary situation.  What you cannot explain is the utter exhaustion experienced at the end of each day, even though the days seem deliciously short (10.30-4.30pm).  But during that time you must sit, listen and absorb a decade of information in our case.  Someone’s future depends on your understanding of the details and examining the evidence with an open mind.

It was my intention to study in the evenings, but I could not brain AT ALL.  I was in bed before 8pm, having forced myself to eat and do something resembling yoga, but which mainly consisted of me in sukhasana, or one-legged pigeon, with my forehead firmly planted on the ground.   I immediately informed my personal tutor and wellbeing officer and kept them updated, as I was convinced my work and health would suffer as a result.

Fortunately, I had an art portfolio to complete for a module, so I would go to court early to beat traffic and draw each morning before the case started.  In a month, I completed most of my portfolio, found the experience cathartic and mindful and was inspired by the other jurors who introduced me to different artists they had come across.  It was weird being in a group of 12 strangers shoved together by random selection.  But they are such a lovely bunch of people and in ordinary circumstances our paths might never have crossed.  I actually feel blessed to have had this opportunity, now.

(illustration and more info can be found at this link)

Another thing I struggled with was having to judge someone’s guilt or innocence because I aim to live compassionately and non-judgmentally.  However, I could not be a conscientious objector in court!  But, the Judge gave us directions that a defendant is innocent (until proven guilty) according to the indictment and the decision based on evidence.  Fortunately, this enabled me to pass the buck; the extensive evidence would judge and I was just its reluctant mouth piece.

After shock transmuted into anger and I was livid at being ripped away from my degree because of someone else’s actions, I surrendered to being an exhausted juror for the duration of what sometimes felt like ‘my’ trial.  I knew I needed to approach this differently if I wanted to feel better.  So, I pretended it was the most boring core module I have ever taken.  I took comprehensive notes of everything (even though it was not necessary).  I did not want to do the defendants a disservice by not paying attention and letting my mind wander.  Note taking kept me focused on what would have otherwise bored me senseless.  I definitely think note taking and critical thinking skills learned at uni helped me critically analyse the data presented to us.

Sometimes, after the men in wigs finished their performances I desperately wanted to applaud.  They certainly made the case more interesting.  The Judge was amazing; he radiated calm, peace and equanimity.  It is nice to know there are people like him in the world.  There was also a smattering of good humour and a few giggles, but otherwise the tone was sombre, especially on the day of sentencing.  There is a public gallery above the court and anyone is welcome to attend.   I highly recommend this would be a great place to visit, especially if anyone is interested in Law.  However, I wasn’t before and I am still not interested in Law as a career, thank you.  But I am grateful to have got some insight into the justice system.

I lightened the tone and improved my mood by getting out at lunch time, having a picnic and walking round Jephson Gardens across the road from the court in Leamington.   One lunchtime I ended up chatting with some little people who cornered me and spoke at me about lego and dinosaurs and it was a welcome relief from the seriousness of courtroom drama.  Walking also enabled me to clear my head and the exercise made me feel good.   Apparently Hippocrates said, “WALKING IS MAN’S BEST MEDICINE” and it is also woman’s best medicine.  Walking and chatting about nonsensical stuff helped me stay sane.