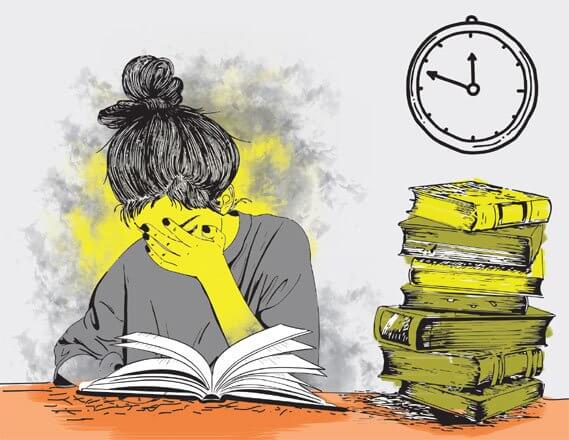 Exam season has officially begun. And, with it comes the stress, panic and well, stressful procrastination. But if there’s one thing I’ve learnt from past exam seasons,  it’s that no matter how much I feel like ‘I’ve never been this unprepared before’ or that ‘there is absolutely no way I can get out of this alive’, I somehow survived. I’m still here and honestly,  I can’t even remember why I even stressed so much in the first place.

So, this exam season, I willed myself to approach exams differently. And despite the occasional slip ups, for the most part, I can definitely say that I feel more positive than I ever have during exams.  Although some friends have gotten sick of the chirpy me, most have jumped on the bandwagon and so it only felt right to scale that up with a blog post on a few tips to de-stress during any type of stressful period:

1. Be a broken record  to yourself

I always  scrolled past cliche, motivational quotes without sparing them even a glance. But, somewhere along my own journey of learning how to de-stress, I began to tell myself things that I realised sounded exactly like those cliche, motivational quotes. Although ‘cliche’ is often synonymous with ‘cringe’, it isn’t always so, once you truly start identifying with it. So do yourself a favour and repeat motivational tidbits to yourself. At some point, you really will start believing in them. The night before the exam or the day of, I always tell myself that I have prepared exactly how much I was able to at each point in time up until that day. And that that was my best. And if my best is not enough, then that’s not within my control. Yes, maybe there was the break that was meant to last 30 mins but instead lasted 2 hours, but you know what, I needed and deserved that break that day, so that’s okay. We humans collectively  set ourselves a  race against infinite time. Now, it’s a race with no finish line, just pit stops. So, take a pit stop when you need it, refuel and you’ll find that you can run faster and longer than you could have without it.

Sometimes, the infiniteness of the  race causes the race to become meaningless. There’s no beginning and there’s no end and we begin to lose purpose. That’s when it helps to divide your race yourself. There is a reason you wanted to be at university – maybe it’s the passion for your course or maybe the sheer need to be able to support yourself on your own income soon. Whatever the goal, remind yourself of it constantly. Remind yourself that these exams are bringing you one step closer to that goal. So, the fact that you are here taking them and preparing for them, is in itself a win. The best way for me to sub-divide my infinite race is by drawing up plans and schedules both long term ones as well as daily ones. I’ve alternated between journals and MsExcel depending on my mood, so I recommend you guys give it a try too. Apart from the satisfaction of crossing it out, it also gives you something to look back on to appreciate how hard you’ve worked up until now. Even outside of exam season, seeing an emtpy page in your journal or an empty cell on Excel is always motivation to fill it up with something productive.

My bucket list for things I want to do post exams have been on an endless growth curve  and envisioning doing those things brings me so much excitement. Such excitement is fuel in itself to propel me through the rest of exam season, although you have to be a little careful with this one to not get too carried away!

Things like these just help you feel much more in control of yourself and your race and it’s that kind of control over your mind that truly is the most powerful tool. At the end of the day, each one of us are not defined by our exam results. We are complex, complex beings and academic success couldn’t be a poorer measure of everything that each of us are. So, take the second to believe in that  yourself and then you’ll find yourself wondering why you were stressing in the first place.