I have noticed the running theme for many of my blog posts so far has been of Buzzfeed-esque style of ‘Ten things…’ and ‘How to…’ guides and so for today I am going to take a different turn and talk about things going on in my life. Brace yourselves, Fiona’s opinions are about to hit you like a train.

But you don’t have to immediately switch off, I have no intention of writing a dull diary entry as the weekend of Week 4 was a big one; I mean, I bought some pants from ASDA on the Sunday. But first off on Friday night was the Warwick Surf and Warwick Snow Two Seasons Ball. 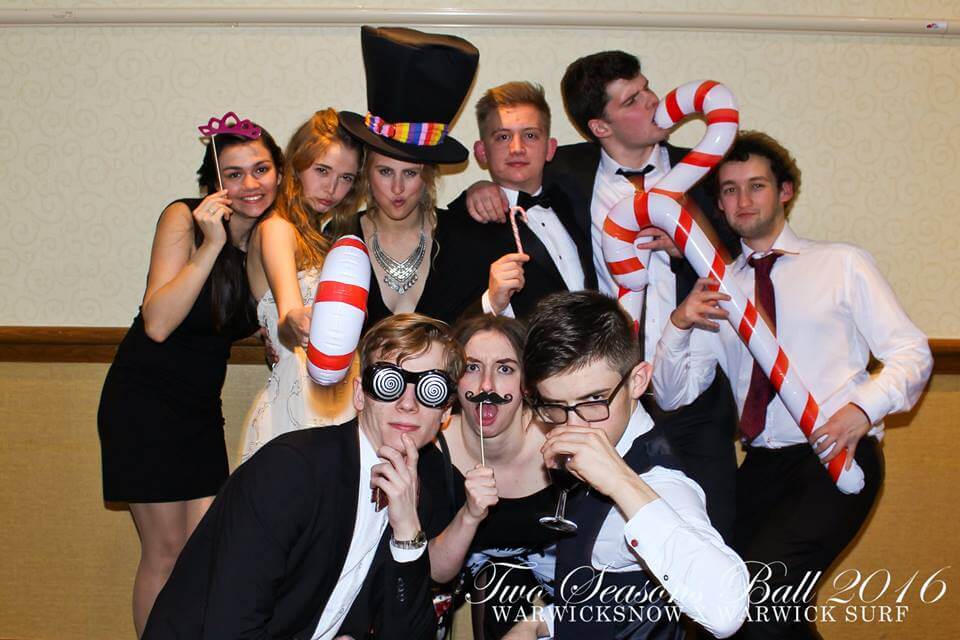 The photo booth is a staple for any ball worth going to!

I am quite a dedicated member of Warwick Surf so it was no real question that I was going to this ball Friday night. I restrict myself to just one ball a year due to the price, so after spending over a year regularly meeting up with Surf, Two Seasons was the obvious choice. Straight after getting home from lectures I popped into Boots to grab some clothing tape, an essential for strapless dresses, and subsequently got ready for the evening.

The night was held in the Hilton at Warwick, and to be quite honest I don’t think they were quite ready for it. Surf and Snow have reps of being a bit rowdy, because in spite of being Warwick Sport associations, training is minimal and this night was of course another wonderful display of madness. The theme was ‘Charlie and the Chocolate Factory’ so of course there was a Dairy Milk bar with the bread. As well as this there was a chocolate fountain, the traditional ‘no hands dessert’ and a banging charity raffle where you could win a Snowboard or 50 quid at Bills. 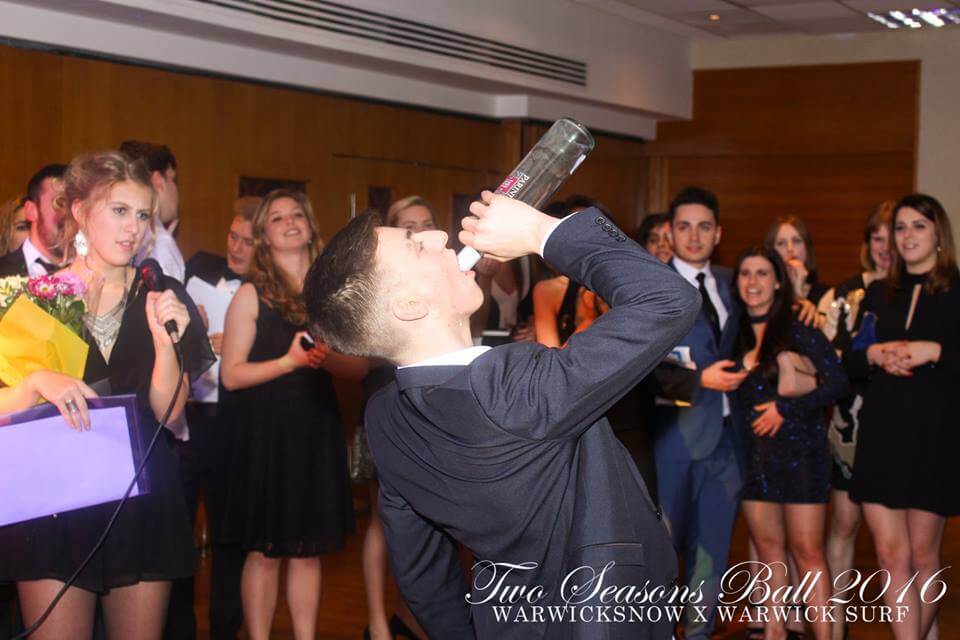 The awards giving was pretty special too, although seeped in private jokes so apologies to any newbies at that point. I won the award for ‘Best Terrible Chat’ which I think is a positive oxymoron. After this it was naturally time to throw some of my awesome shapes which require quite a large ‘dance radius’ so thankfully the dancefloor wasn’t the most popular part of the venue.

If you’re a Warwick student I would thoroughly recommend hitting up one of the many balls thrown by the University. If you’re close with a society or your course-mates then there are plenty of society and department-specific events, so keep your eyes peeled for tickets, as the majority are held late Term 2/Term 3. Just want to tag along with your flatmates? The larger balls like the Sports Ball are so big they make themselves intimate, so are the perfect time to get bedazzled and meet some new people.

If you hadn’t guessed already by the title, this is the reason I had to be boring and not join in on the late night antics of Two Seasons. Up at 7, rocking my red and black Warwick vest (#represent), I headed to the Leamington Church to meet the bus to Gloucester for the big race of the season. If you aren’t sure, BUCS stands for ‘British Universities and College Sport’ and most sports compete at them, either in a one-off championship or a weekly match. Athletics have training every day but it’s always super casual and really all-inclusive so whatever distance and whatever time you can run everyone is invited to compete making the atmosphere amazing. Unfortunately, the expected double-decker never arrived, and what we did get was a 49-seater meant for 75 athletes (*looks pointedly at Warwick Sport*). Thanks to some wonderful car owners, those who didn’t get on the bus managed to get lifts to the event, which was particularly kind as there was no way that they were going to remain mud-free (much to the dismay of the bus driver!). Upon arrival, the horrendous wind and rain in Leamington had unfortunately spread to Gloucester and it could not have been less inviting to strip down into a vest. Even arch-rival Loughborough University’s tent was blown off its pegs and into the track! Nevertheless, our tent was pegged down, compulsory face paints was applied and the buzzing excitement drove us all into our races. 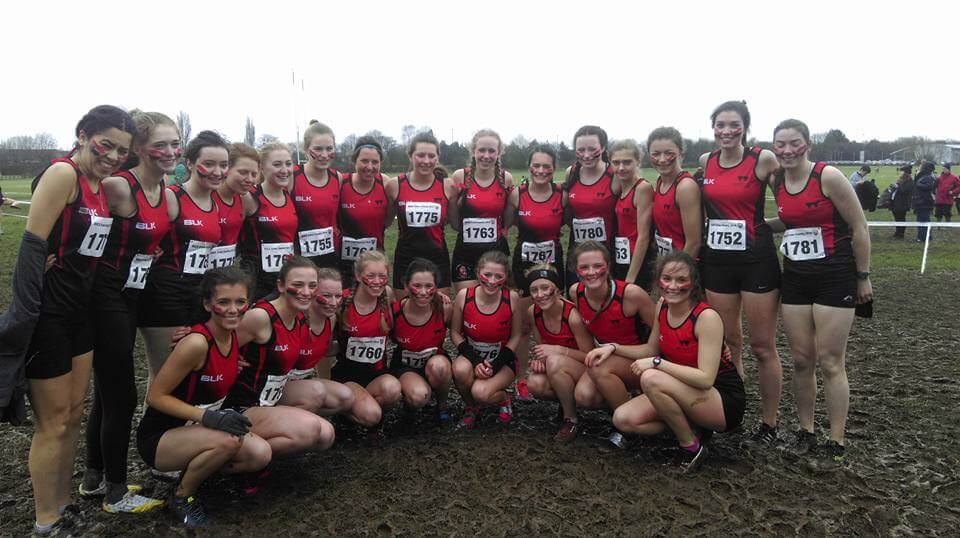 The mud was Glastonbury-worthy, and at parts your feet were fully submerged in water, but that is cross country for you. There is definitely some enjoyment somewhere in going through these tough terrains with your fellow athletes, no matter what university, and that is what is so good about these BUCS events- it is such a good way of popping the Warwick bubble as it is a reminder of what such a massive community of people is made up by students and how Warwick may be high in the league tables, but that does not mean a girl from Queen Mary isn’t going to absolutely thrash you in the sprint finish. I would definitely recommend trying to get involved in a BUCS event during your time at University; there is such a great team spirit and it makes for a rewarding day out. 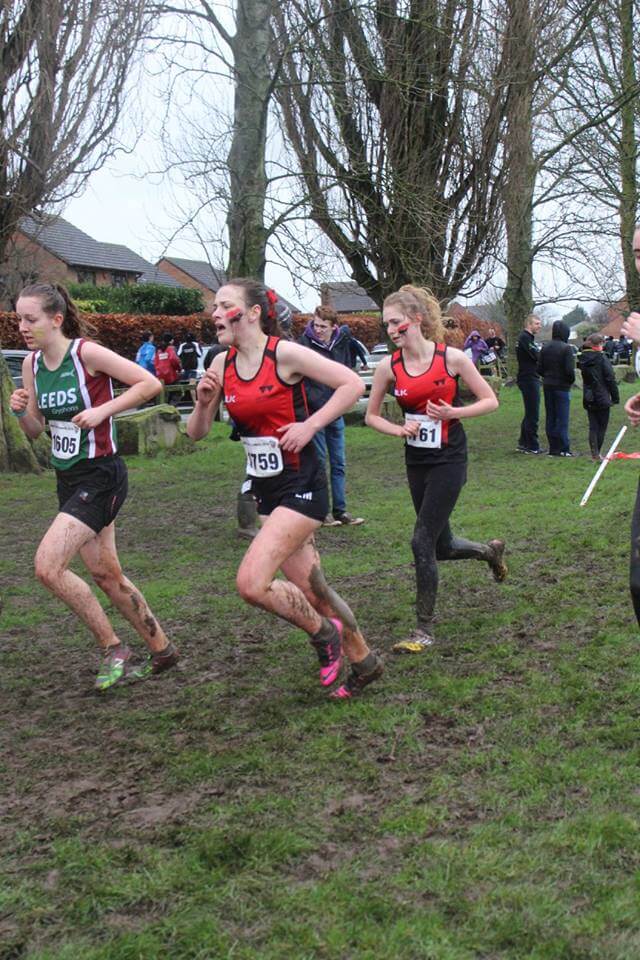 Warwick smashed it at BUCS as well, getting out highest positions ever in the team rankings with the Women’s team and Men’s A Team coming 16, and the Men’s B Team coming 35. A truly amazing performance from Alex Brecker too, who came 4 in the Men’s A race getting a BUCS point which has never happened before in Warwick Athletics history! As much as it was a fun day, I must say that my half an hour post-race shower as one of the highlights.

To finish off I just want to say well done to everyone who raced in BUCS, well done to Kate and Constanze for throwing a mega Two Seasons and if you see me or any other members of Athletics running around campus for 24 straight hours with a bucket on Wednesday/Thursday please donate a bit of your spare change for Blind Sport!