While nowhere near as large as the spring elections, the autumn elections are still a pretty big event on campus. This year, I decided to run for the position of UG Faculty Rep for Physics and Formal Sciences (not a very catchy position I know!) and excitingly I was elected! In this post I wanted to talk about what the autumn elections are, what it’s like to run in them and what my new role will involve.

Many SU positions were up for grabs in the autumn elections. This year students ran to be Part-Time Officers, such as the International Student Officers, Faculty Representatives (like me!) and the Trans Students’ Officer, and also for positions on the Education, Welfare, Sports, Societies, Democracy and Development Execs. The execs meet a couple of times a term and are responsible for making decisions and running campaigns to improve the student environment here at Warwick. These positions enable us to have a say on difference aspects of what the SU does as well as getting involved in student representation. Personally, I think it is really important for students to take responsibility to run and vote in the autumn elections as you can’t grumble on what the SU does (or doesn’t) do if you don’t stand up and use your voice!

After I decided to run in the elections and paid my deposit allowing me to run, I then had to start thinking about my campaign. I didn’t think I would do much – perhaps a couple of posts on Facebook and speaking to my course mates – but in the end I loved getting really involved in campaigning! I had some posters printed off in the SU and made a couple of cardboard signs as well, which I then stuck onto the designated cages around campus. I also made a Facebook event, posted on Twitter and Facebook and even did one lecture shout out (okay, so it was for a lecture I was going to be in so it wasn’t too scary!) It was exciting to try and get my name and manifesto out on campus and see my posters around, and certainly not as intimidating as I expected! 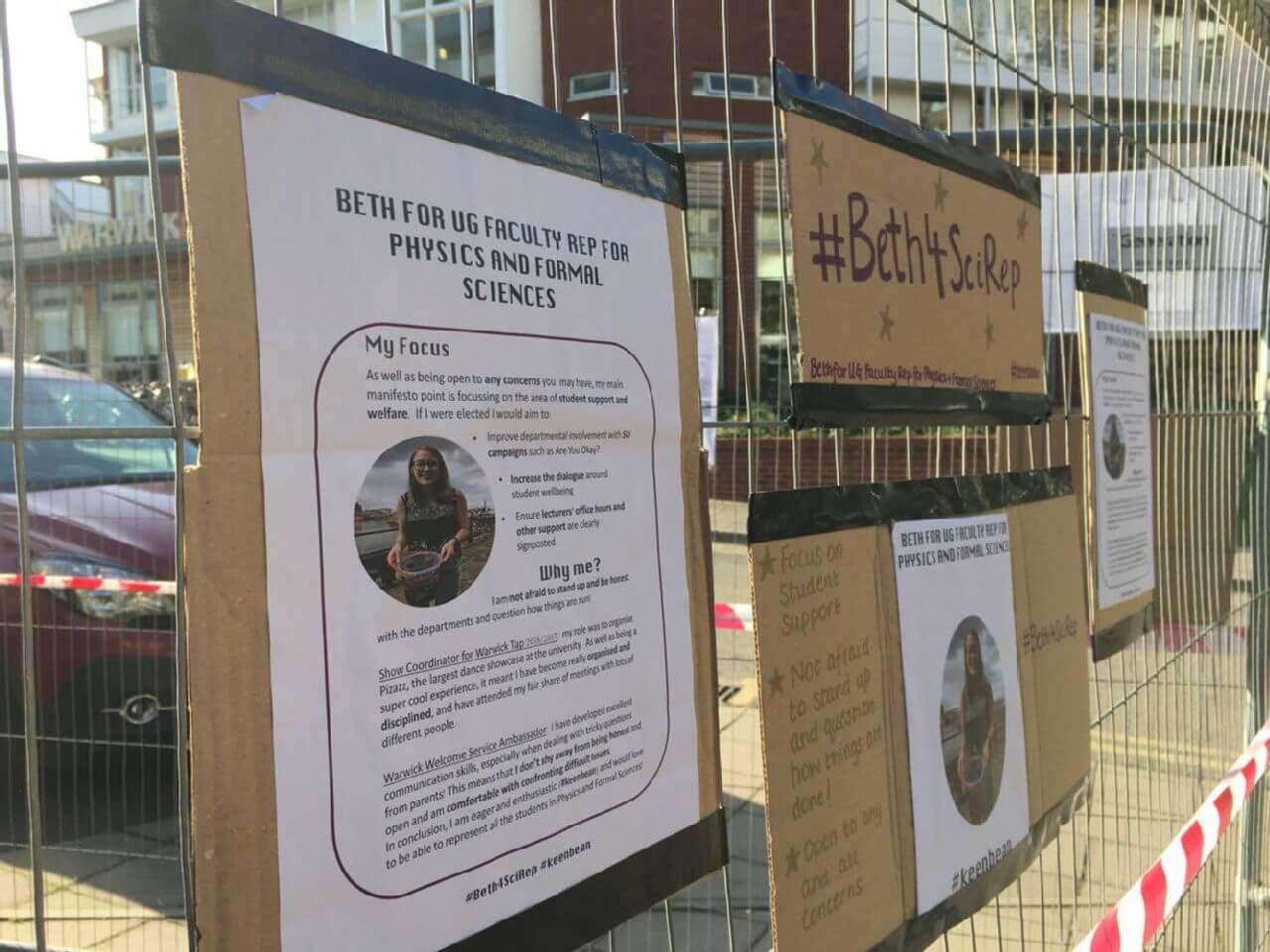 My campaign must have worked, as I got elected! My new role as UG Faculty Rep for Physics and Formal Sciences basically means I represent the students in the maths, statistics, physics and computer science departments. As part of my role I sit on the Education Exec within the SU; I decided to be the Secretary too which means I write the minutes of the meetings! The members of the Education Exec have some priorities for what issues we wish to focus on for the year, and look at new policies relating to education. Faculty Reps also go to departmental SSLC (Student Staff Liaison Committees) to see what issues are being raised, and also take the issues to faculty board meetings. There is a real opportunity for us to make a change as we are able to speak directly to the people who make the big decisions. I am super excited to start and see what I can do with this role to improve students’ experiences in the maths, stats, physics and computer science departments!