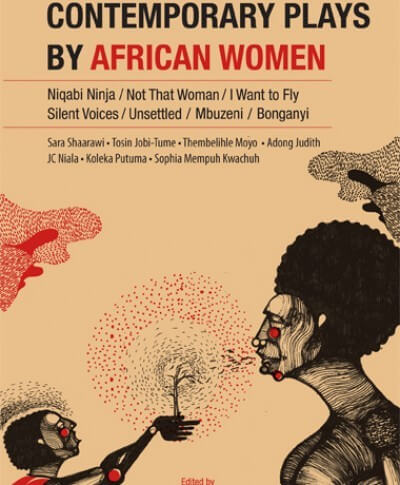 African Theatre: An Evening of Celebration

Hello all! Who can believe it is already the end of week 8 !? This hectic term is flying by in the blink of an eye. Today I’d like to tell you about an exciting experience I had last week relating to a module I took last term – Theatre in the African Context.

Having studied a wide variety of plays across the term from different African countries/cultures, our tutor, Yvette, told us about a book she had co-edited and which was soon to be released: an anthology of new contemporary drama by female African playwrights. The collection was to be launched at a special, one-off event at the Belgrade Theatre in Coventry and we were all welcome to attend.

This was a really exciting prospect – not least because a number of the playwrights whose work features in the collection would be attending! So, duly, my friend Beth and I headed off last week to the Belgrade (we ended up on the wrong bus en route and got hopelessly lost – but that’s a different story!). Taking place in the studio theatre, a lovely intimate space, the evening involved performances of extracts from some of the plays in the anthology, by a youth theatre group. After each extract, a respondent such as a writer, director or academic, would lead a discussion relating to the wider issues and themes raised by that piece, opening the dialogue up to the audience.

There was a really special sense of community in the room throughout the evening, which was lovely to be part of.  Hearing in-the-moment reflections and responses to the performances from members of the audience was really interesting, making you consider different interpretations, links to current social and political issues and all in all cementing a sense of theatre as at the heart of community, having such a force to bring people together. The youth theatre performers brought a sense of innocence and at times an endearing simplicity to the material, rather than feeling the need to overact or layer too much on top of the text – instead allowing it to speak for itself. One of the standout moments of the night was when a chorus of 4 young women sang a traditional African song acappella; this was really stirring and powerful, not to mention beautifully sung and harmonised.

Towards the end of the module, we had read and discussed the new play ‘Niqabi Ninja’ by up and coming playwright Sara Shaarawi (a Warwick grad, no less!), a truly original and thought-provoking work exploring female agency and empowerment in a world where women face the constant fear of abuse – with 2 characters, Hana, and her superhero-esque alterego, the Ninja. In our seminar we had all responded really well to this play and found it not just engaging but really accessible compared to some of the more challenging works so removed from our own experience- it had such a life beyond its context which all of us could easily relate to. So, as you can probably imagine, it was wonderful to be able to meet and talk to Sara about her play, even just to say how much we’d enjoyed it!

Given that African theatre is such an embodied form compared to the Western/European tradition, which privileges the text before all else, it was extremely useful to my own understanding of the plays to see them performed in person and begin to fully appreciate the use of music and physicality in shaping meaning. We still have a written examination to come for this module in summer term, and having now been to the launch event I’m hoping to have fresh perspectives to bring to bear on the style, issues and impetus of African theatre in its many diverse forms!