It’s been almost two weeks since I moved out of my flat in Tocil and I miss it already! Tocil had everything I was looking for from a first year accommodation and it’s where I’ve made special memories and my closest friends at Warwick. In this review I want to tell you a bit more about Tocil, focusing on the key areas that you will be considering as you choose your accommodation. I hope this gives you an insight into living in Tocil and helps you decide if it’s the right accommodation for you!

Tocil is located on central campus in between the Oculus and the Sports Centre which means it only takes five minutes (or even less) to walk to Rootes Grocery Store, the Piazza, the SU (which is ideal if you’re walking back from Terrace Bar or Copper Rooms after a night out!), the bus interchange, the library and Warwick Arts Centre, and Cannon Park shopping centre is only a 10 minute walk away. Despite being so close to the heart of campus, Tocil still has a sense of being secluded and peaceful as the blocks of flats are away from the main street and are surrounded by trees which block out the hustle and bustle. As a Theatre student, almost all of my classes this year have been in Millburn House which took me about 15 minutes to walk to and although Tocil is about 20 minutes from the Postroom, there are Amazon lockers outside the Sports Centre and the SU so it was easy to collect parcels. Tocil also has its own laundry room on site which is great as you often have to make a few trips back and forth to move your washing from the washing machines to the dryers.

When I originally applied for accommodation, I was keen to have a room with an en suite as I was worried that shared bathrooms wouldn’t be clean and that I’d be sharing with lots of other students, but this turned out to be completely untrue! There were 12 people living in my flat with 4 bathrooms (containing a combined total of 3 showers, 4 toilets and 1 bath) between us so there was always a bathroom free and they were professionally cleaned virtually every day. Although at first it felt like a hassle having to carry a washbag to the bathroom, it didn’t take long to get used to and we found that sharing bathrooms made the flat feel more sociable as it meant we often saw each other out in the corridors. Despite my initial worries, it turned out that sharing a bathroom wasn’t a problem for me at all, so don’t worry too much if you’re allocated an accommodation with shared bathrooms.

I had one of the smaller bedrooms in my flat (although the differences in sizes were only slight) but there was plenty of storage space – there was lots of wardrobe and drawer space, several bookshelves and a large desk. I also had plenty of room to put my clothes horse up when I was drying laundry. The room was also really light and I often saw rabbits and squirrels grazing on the grass outside my window which I really loved. The noise that I could hear from my room varied but generally the rooms were well sound-proofed and if there ever was problems with noise, we would ask each other to be quiet, so managing sound was more about communication between flatmates than the design of the rooms. I decorated my room with photos and fairy lights which made it feel really cosy and we had a lot of fun decorating the corridors at Christmas! 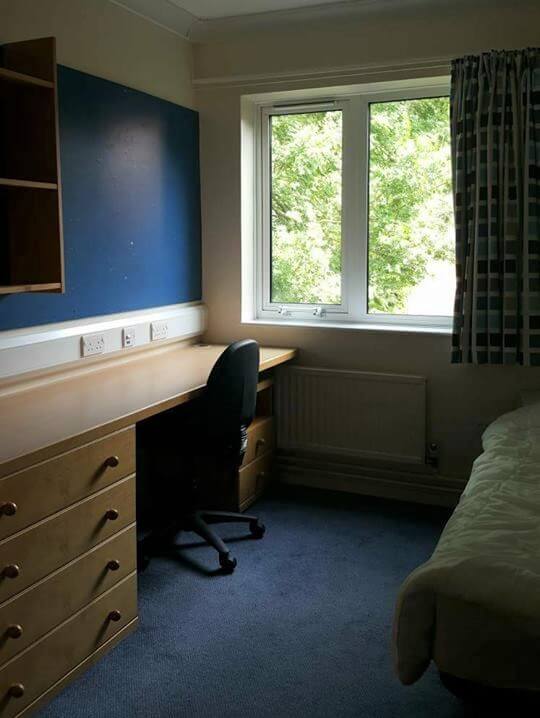 My bedroom in Tocil (once I’d taken down all of my fairy lights!)

There was plenty of storage space in the kitchen (we had a fairly large cupboard each) and it was cleaned twice a week, so whilst it did get quite messy at times, this never lasted for long. The kitchen could be quite busy in the evenings from about 7pm but there was still space for several people to cook at the same time. Tocil doesn’t have a common room like some of the other accommodations so instead we used the kitchen as our social hub where we would chat and have pre-drinks.

I loved the woodland feel of Tocil – there were lots of rabbits and squirrels living in the wooded areas around the blocks and the trees really created a sense of tranquillity which was lovely to return to after a busy day. In the summer term a few people sat out on the grass outside the blocks and on the Oculus green so it was good to have outdoor spaces to study and relax so close by. This year Tocil had three Resident Tutors who lived in the accommodation to be on hand if we needed help and to make sure everything was running smoothly, and one of the Resident Tutors lived in our block which helped make it feel secure. I also often saw campus security nearby which also made Tocil feel like a safe place to live. Our flat generally got on really well and I felt that there was a good balance of having your own space and seeing people often. It was usually quiet in the day and became livelier in the evening but this varies from flat to flat depending on who lives there. 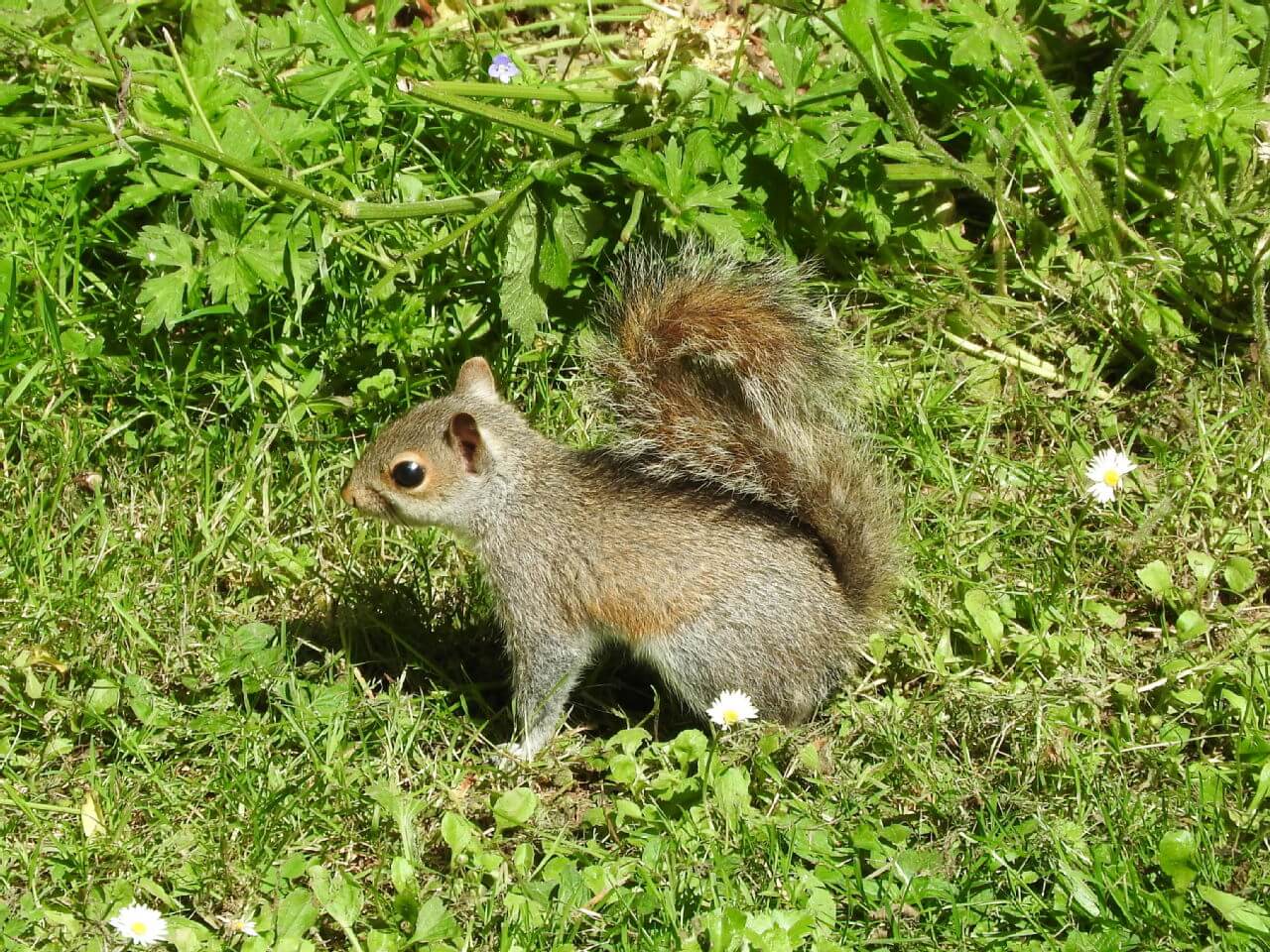 I took this photo of a tiny squirrel from my bedroom window!

Regardless of which accommodation you choose, one of the most nerve-wracking parts of preparing to move to university is wondering who your flatmates will be; the thought of living with a group of people you’ve never met – let alone lived with – before is really scary! Warwick has a system in place to help with this. As part of your accommodation application you will have the opportunity to write a short statement about yourself which helps the accommodation team arrange students who are similar in terms of lifestyle and interests etc. I felt that this worked really well for my flat as many of us had similar personalities and we got on well for the vast majority of the time, but I also have friends on my course who did not get on with their flatmates. Being in an unfamiliar environment with completely new people takes time to adjust to, so even if it seems like your flatmates are not bonding at the start, it is likely that everyone is just settling in, but if you were to have difficulties with flatmates there is support available (e.g. your Residential Tutor). Although your flat is a significant part of your first year at Warwick, it’s important to remember that it’s just one part of your overall experience and just a fraction of your chance to meet new friends – however it works out, there are lots of people around to help you and everyone starting their first year at uni is experiencing exactly the same worries.

Wherever you are on campus, you’ll be close to so many great facilities and each accommodation offers you a space to relax in and make your own. The campus is a beautiful place to live and being in the midst of the university atmosphere is both exciting and unique – you will probably move off campus in your second year so make the most of everything living on campus has to offer! 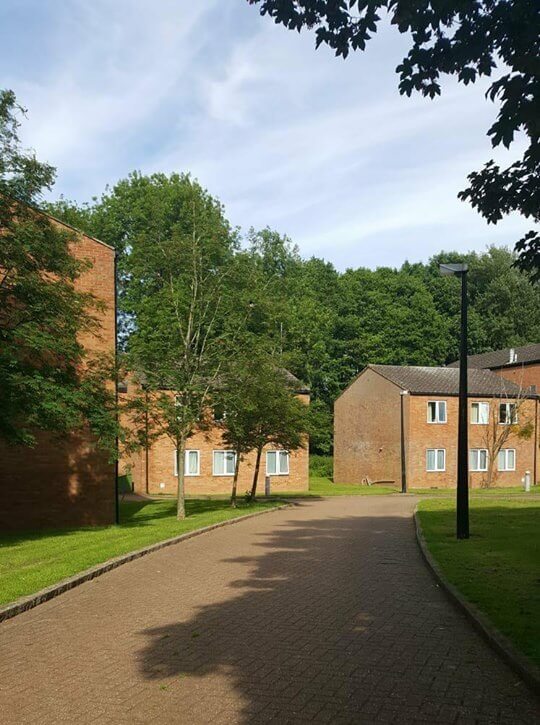