A Year of Shows… Part 1 – OurWarwick 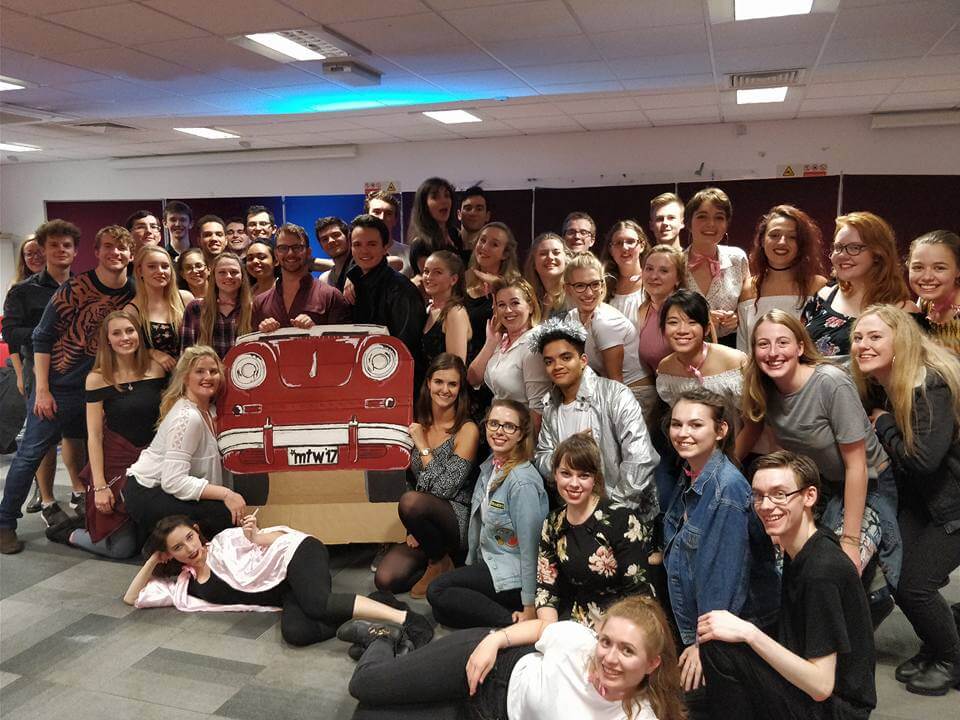 One of the highlights of my first year at Warwick was my involvement with all the different performance societies – I’ve mentioned some of these experiences briefly in earlier posts, but I thought it would be good to do a short term-by-term series looking in a bit more depth at the shows I’ve been lucky enough to take part in over the past year! Before we get started, here’s some of the best reasons for taking part in shows at uni, in case you need some extra inspiration…

1) Top on my list is undoubtedly the chance to meet such fantastic people! Everybody gets really close rehearsing a show & it’s like having a little second family away from home. I’ve made so many lovely and funny memories.

2) It keeps you busy! Getting involved in drama and performance at Warwick really really helped me deal with homesickness and settle in, because I didn’t have time to get lonely – in fact, I was delving straight in, getting to know people and putting proper roots down. In between my lectures & seminars I was forever dashing off to another class or rehearsal, or if not that then practicing songs / learning lines, and I wouldn’t have had it any other way.

3) Whether or not you’re interested in turning professional in the future (like me!) or not, doing shows in a uni environment is a great chance to gain vital experience and develop your skills, without lots of added pressure. It’s a chance to get out of your comfort zone – if you’ve never done a play before, why not give it a go? Or if you’re an old hand performing onstage, maybe you’ll get the opportunity to play a different kind of role to anything you’ve done in the past. You really won’t find out unless you give it a go.

Here’s to lots more performing over the months to come…!

My first foray into performing at Warwick – when I arrived at uni I had no idea I’d be onstage less than 2 weeks after moving here! MTW puts on a show in the space of a weekend every year & it’s a great way to get involved, meet other theatre-loving freshers and engage with a society from the off! Last year the chosen production was Grease, and with zero budget, a mostly fresher-led cast and less than 48 hours rehearsal, it was a frantic whirlwind of a weekend, but all the more fun for it! Having auditioned a few days earlier, I was thrilled to find out I had been cast as Sandy, and just as nervous to learn and do justice to such a big role in such a short time – however together with my co-stars we thrived on the challenge, and our rehearsals, which ran on Friday evening and all day Saturday, were packed with staging dialogue, learning choreography and practicing harmonies as fast as we could. There was such a lovely buzz of energy in the rehearsal room & everyone worked beautifully as a team- we pooled resources to come up with innovative 50s style costumes, and members of the crew even made and painted a car for the drive-in out of some cardboard! It all looked great. The show itself went really well (bar a few hilarious mistakes!), we had a very warm and appreciative audience of fellow students & it really was the best way to have started off my time at Warwick. I will never forget the sheer joy of singing those famous numbers – especially ‘Summer Nights’ & ‘You’re The One That I Want’ – or indeed, listening from backstage to the guys bring the house down with ‘Greased Lightning.’ And to finish off a hectic weekend we ended with a celebratory cast and crew meal; my first ever visit to the Dirty Duck.

I joined the Intermediate class at the start of term & we worked towards our slot in the CMD (Contemporary and Modern Dance society) annual showcase, ‘From The Top’ which took place in the Butterworth Hall at the Warwick Arts Centre. This was a great mix of styles, from ballet to street and everything inbetween. Everyone at Tap is honestly so lovely! The best thing about it is that you can take part in classes as much or as little as you want/are able to, and there’s absolutely no pressure to do the shows – it’s fine to come and simply follow along with the class learning choreography. Doing the performance at the end of term was a fantastic experience, however, especially as I had very minimal experience of dancing onstage before coming to uni – our rather sassy routine was set to the song ‘Black Hole’ & we’d all worked so hard on mastering the steps. If you join a dance society, I would really recommend doing the shows; there’s a huge sense of achievement in getting better and better each week until you’re ready to show your work to an audience. In term 2 you also get the chance to be in a competition team, which travels to other university contests; this is a great opportunity too, although sadly I wasn’t able to fit this in during my first year.

Every year, Freshblood New Writing society adapts a classic fairytale into a short 30 minute or so pantomime. Last year, I was in Beauty & The Beast as the Enchantress. It was really laid back and low-commitment at a busy point in term, and a nice festive way to end things before the Christmas break. There were only a handful of short rehearsals beforehand and most people had scripts in hand on the night; it was essentially a good bit of fun and nobody took it too seriously! The script was filled with in-jokes relating to Warwick & everything was suitably tongue-in-cheek and over the tops. Songs were woven into the mix, a little bit of everything from One Direction to Disney to Mean Girls & Mariah Carey, in true panto fashion. This all took place at Kelseys, a popular student bar in Leamington, and once the panto had finished everyone stayed behind to drink and socialise, so it was a great end to the year! Unfortunately I don’t have any photos from this hilarious night though.

Watch out for Parts 2 and 3! To be continued…