A Week as a Warwick Devil – OurWarwick

A Week as a Warwick Devil

For most History students, week 6 tends to be nice and relaxing as its reading week, free from all lectures and seminars to, well, catch up on reading and also rejuvenate yourself for the final weeks of term. My week 6 was very different. Yes, I managed to squeeze in some reading, but for the Warwick Devils, Warwick’s Cheerleading and Gymnastics Club, this week was crucial for the lead up to our Future Cheer competition at the weekend. My week mainly consisted of dancing, eating and sleeping occasionally to prepare for the big comp.

Today I kept popping back and forth to the Humanities Studio for the Pizazz 2017 Dress Rehearsal. This is Warwick Tap’s showcase, with performances on 19 February, the day after Future Cheer. Devils’ Jazz team are performing in the show, so had to practice in front of Tap exec, which felt as though we were auditioning for the X-Factor. Everyone seemed to be impressed with our dance.

In the evening I had a stunting rehearsal. I’m in All Girls Level 2 or AG2 for short, which means there are 5 of us on the team, a back, two bases, a flier (the one being thrown up in the air) and a front (me). Practice went really well ready for our dress rehearsal tomorrow morning, eek!

Dress rehearsal at 7:30 in the morning! As I’m in four squads this was a pretty tiring hour and a half but all the dances went well, with Jazz being a particular favourite of the morning. I was most proud of AG2 as although we didn’t hit every move, we managed to save any falls and carried on going to rapturous applause, yay!

I had a midday tap rehearsal as I’m also in Warwick Tap, meaning this day pretty much consisted of walking to and from Westwood.

This evening I had two rehearsals of Pom and then Hip Hop. Pom’s spacing hadn’t been as good in the dress rehearsal in the morning, so a bit of cleaning was needed. Hip Hop had gone well, so just a few bits of nit picking going on.

It’s Valentine’s Day! I woke up to a lovely surprise of chocolate outside my door from bae (my flatmate Charlotte) and we had a little date at Subway as they were doing a special free sub deal. I then worked until my evening practice of Hip Hop and Pom, where we just repped the routine to practice performance and keeping the energy up. We were practicing our Pom faces which is basically grinning and pouting and singing along to your heart’s content. A late finish at 10, but my flatmates had ordered in Dominoes which sat waiting for me to stuff in my face.

Today the Devils hosted a 12 hour Cheer-a-thon in the SU to raise money for Coventry Rape and Sexual Assault Clinic (CRASAC). Different squads took turns to practice on the mat, with the idea being there was something happening for the whole 12 hours from 8 am to 8 pm. I started at 11 with Hip Hop, then had AG2 12-2, then some Jazz 2-3, with plenty of Maoms and Rootes brownies to keep us going. Jazz then had a rehearsal with some of us staying longer to prepare for our performance at the 1920’s themed History Ball. I then made my way to an extra tap rehearsal, followed by the Devils’ Pizza Party to mark the end of Cheer-a-thon (there’s no Pop! for the Devils as we have an alcohol free week before comp). Pizza, popcorn and a cheer documentary on Netflix was a great way to finish off a dance filled day. 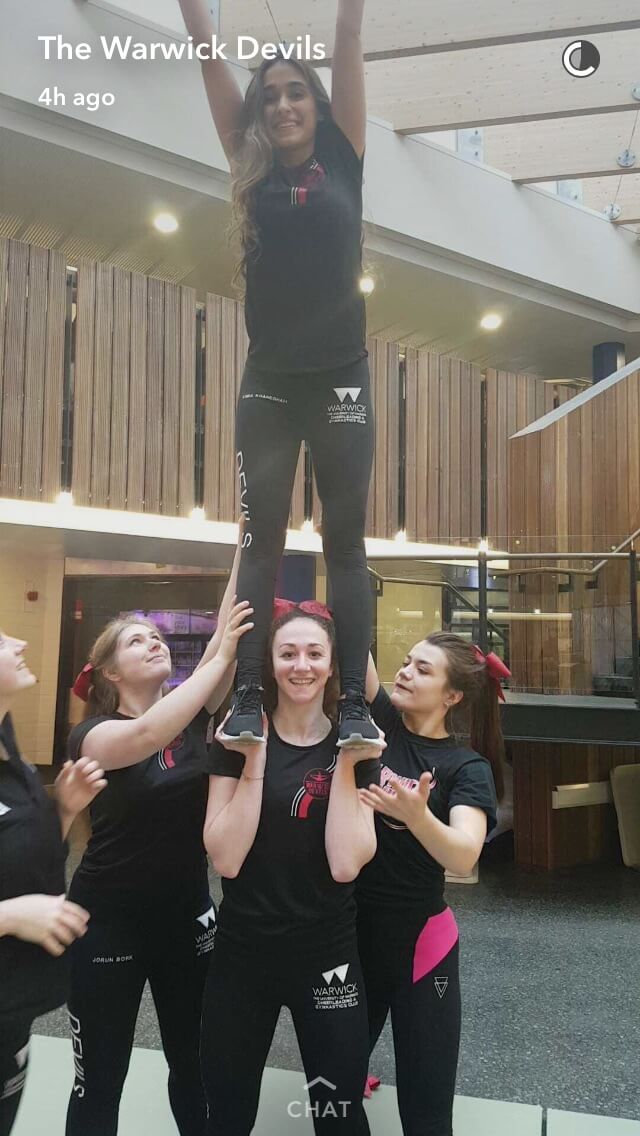 AG2 squeezed in an extra practice today as our flier had been busy for the Cheer-a-thon, and despite some scary falls we managed to hit the routine really well. I then wandered to Tesco and Boots to buy all my dance necessities for comp on Saturday, such as foundation, hairspray, fake tan and plenty of snacks. I had another tap rehearsal in Westwood before heading home to have a well-deserved lunch.

I did some movie watching (it’s for an assessment, I promise) before heading back to Westwood for a Pom practice. We kept repping the routine which made us feel more confident for the day. I had a late tap rehearsal in the evening before heading to the Dirty Duck for my flat’s weekly outing to the pub quiz, which we failed spectacularly.

The day before comp! We had our last AG2 rehearsal which was only brief to practice with music and we even added in a last minute move as we had extra time. Feeling confident for tomorrow, I headed home and did some work. As we had to leave very early from Leamington on Saturday morning, us campus dwellers had been offered places to stay the night before, and so Hip Hop coach Amber picked me and some others up from campus and took us back to hers. It was one of our teammates 22 birthday, so we all headed to Carluccio’s for a big meal to set us up for the day ahead.

The day has finally come, my first ever cheer competition. We woke up just before 7 and began prepping our hair and make-up before setting off just after 8. We arrived at the NEC Genting Arena in Birmingham and it wasn’t long before Pom made our way to the warm up area. We smashed our routine really well, with massive smiles on our faces and the rest of the Devils cheering loudly from the side lines.

I then had only half an hour until Hip Hop had to warm up, so quickly changed and let my teammates alter my hair and make-up before heading down. Backstage we were scouting out the competition and thinking we were in with a chance. Our performance was huge, with the judges and the whole arena absolutely loving our ‘old skool’ boom box theme. Really pleased with how we’d done, we were told our routine had hit zero, meaning the judges had given us no deductions or penalties. We also got a cute badge for this. 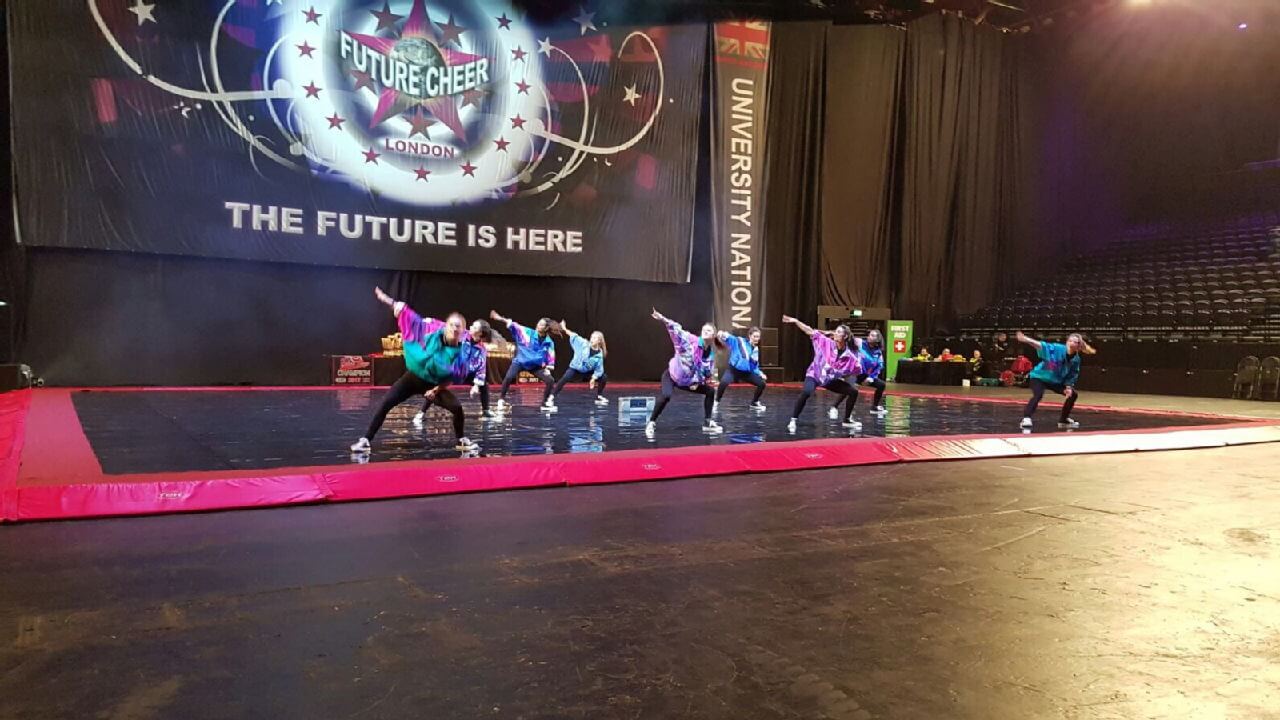 Last in the dance category was Jazz. I was most nervous for this performance but doing well on the other two made me want to smash it out of the park. The surface of the dance mat made some of the moves a bit tricky, but we did the routine really well and were pleased with our performance. Time for a quick lunch with the parents and a brief shopping trip to Resort World before heading back for the results. 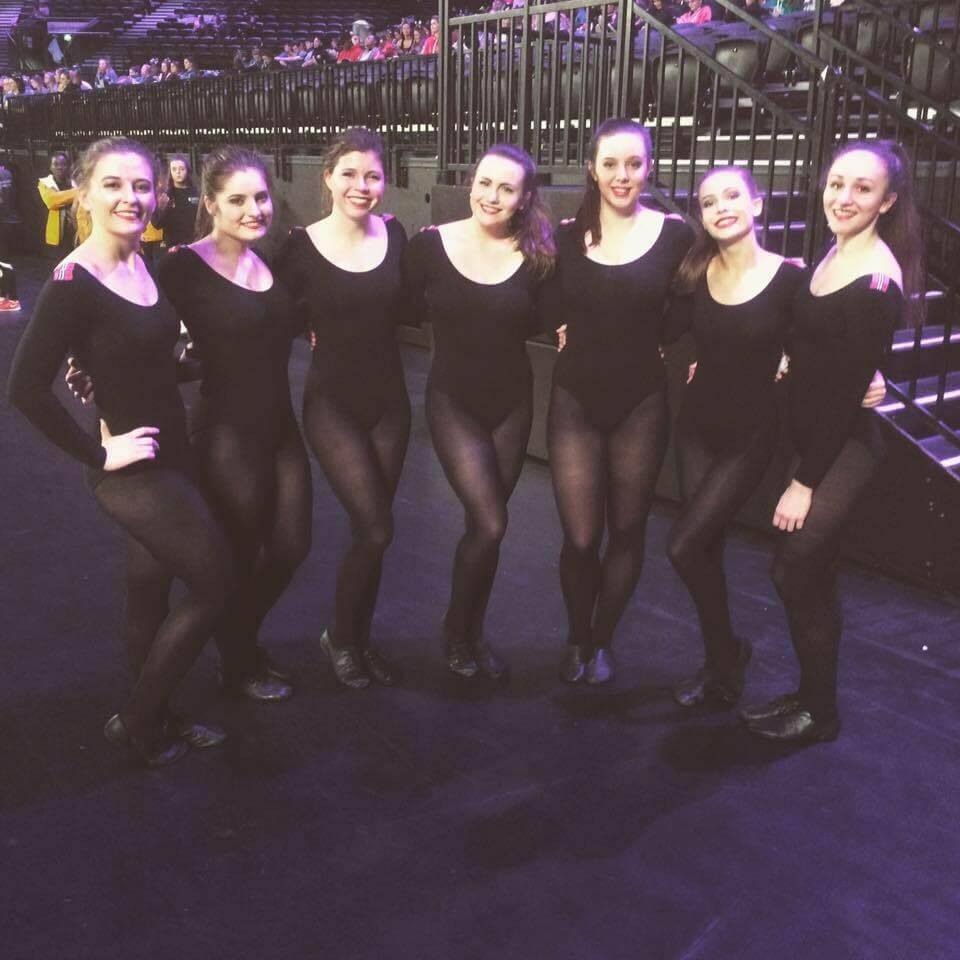 First to be announced was Hip Hop. We were all getting more and more excited as the announcements went closer to 1, and when 2 place was called out and it wasn’t us, we went crazy! We had won! We were all so busy jumping and screaming we missed our turn to go and collect our trophy. Next up was Pom who placed 9, then Jazz who placed 8, both slightly disappointing results but room to improve for our next comp over Easter. The announcer then started talking about Grand Champs, an award given to the highest scoring dance routine of the day. I turned to my friend and said we could have this, and surely enough, Warwick Devils Hip Hop won! The whole team went mad and could barely stop smiling for our photos and presentation of backpacks and medals. We were Grand Champs, a first for the Warwick Devils. 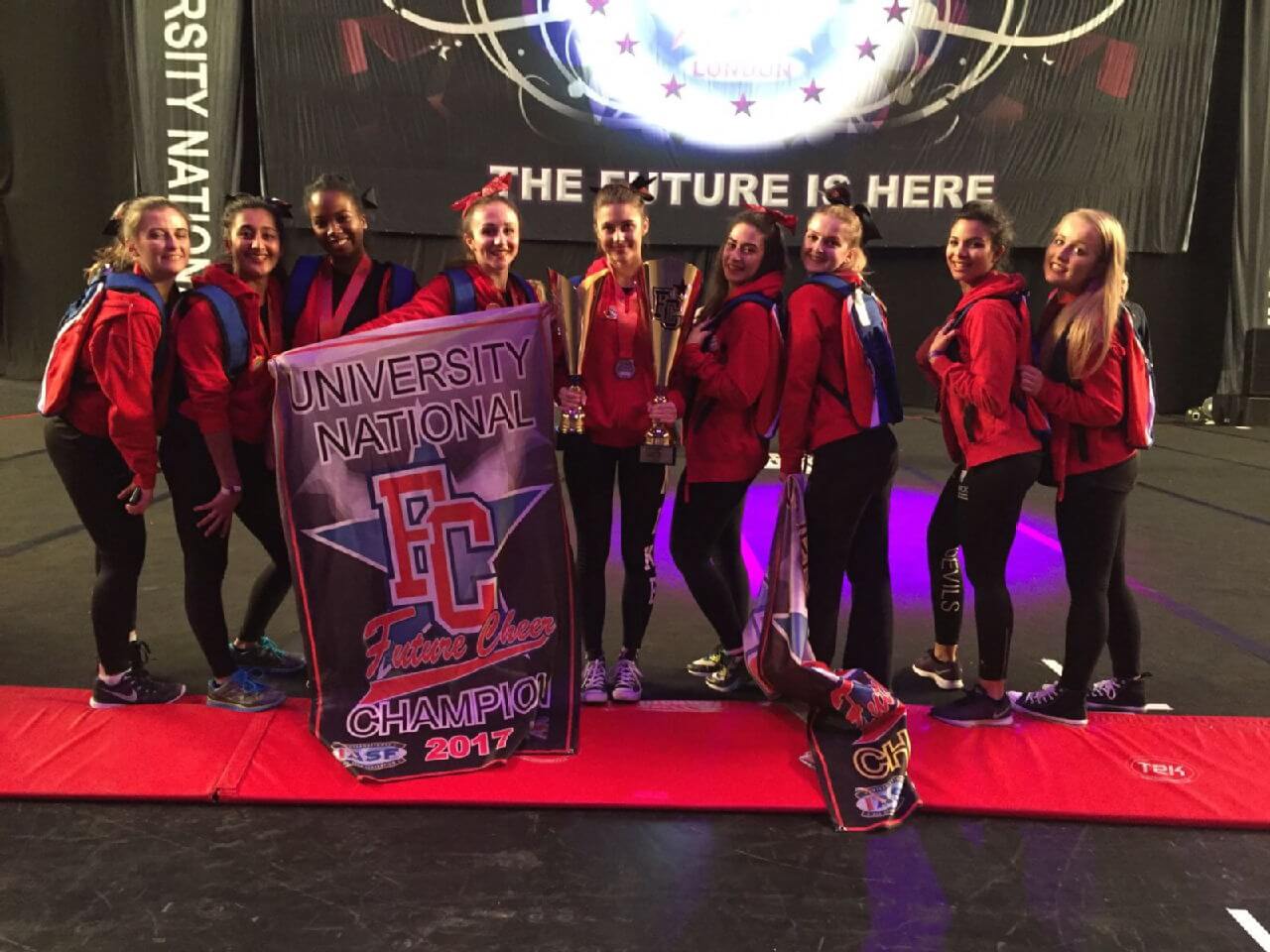 Winning in Hip Hop made me even more excited for my last routine of the day, AG2. Stunting is difficult as you either hit the moves or wobble and fall, but our practice backstage went really well and we ignored other teams practicing around us to not get distracted. On the mat we brought all the sass we could muster and hit every move really well, the best we had ever done. Now I could relax and watch the last small stunt routines of the day and cheer as loudly as everyone had cheered for my routines. Go Devils! 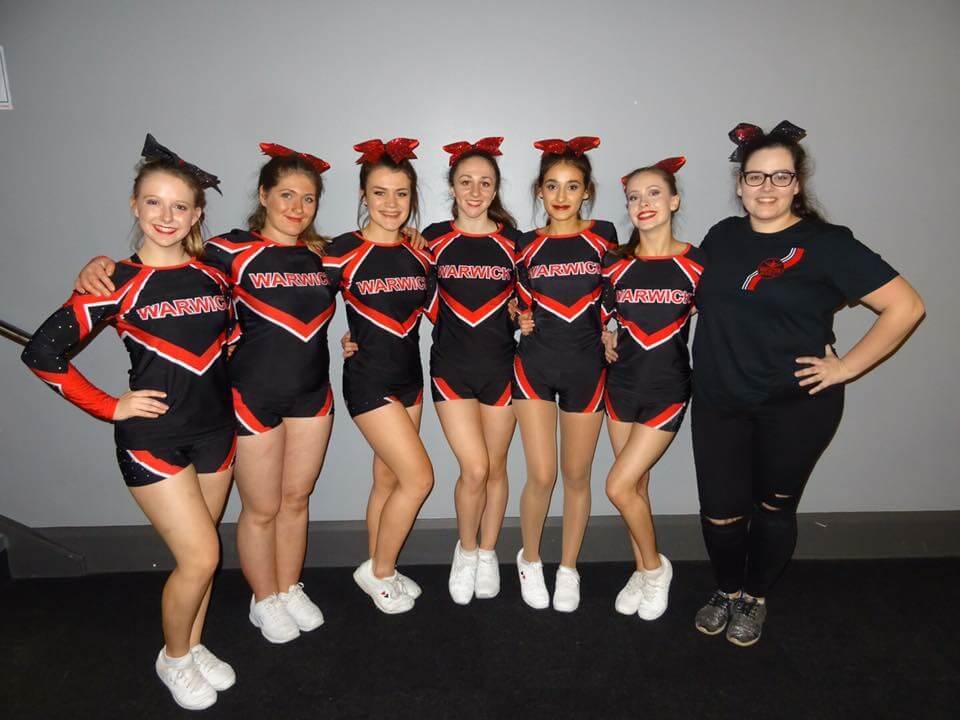 Time for the last awards of the day and although not as dramatic as the first lot, AG2 did really well placing 4, I think the highest placing AG2 group Warwick has had, and the other small stunts Co-Ed 2 and 3 came 4 and 5. We headed home at the end of a long and exciting day, and the Hip Hop team managed to muster up enough energy to head to Kelsey’s with our medals and bows for a celebratory Eliminator.

So there you have it, a very jam packed week with the Warwick Devils, ending in the winning of Grand Champs! Dancing is something I’m really passionate about and obviously not everyone takes part in four squads, but there’s a place for everyone in the Warwick Devils. Even if you’ve never danced before, please consider taking part in one of Warwick’s many talented dance groups and feel free to send me any comments or questions. 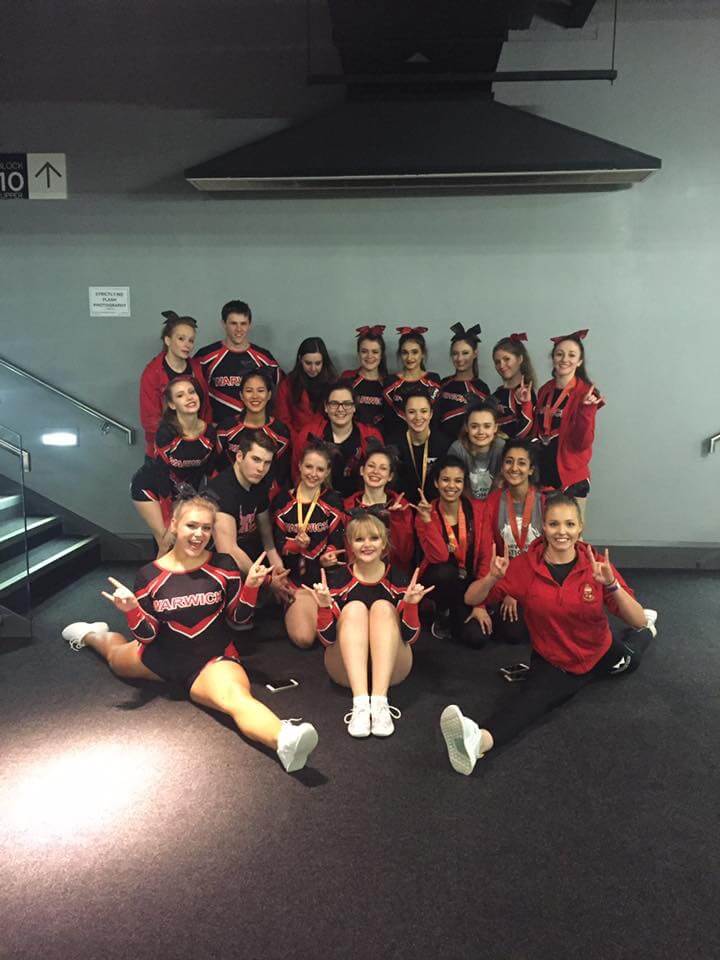