A (Series) Starter for Ten… – OurWarwick

A (Series) Starter for Ten…

As anyone who has read my blog before will know, I love quizzes. I’ve just finished my degree, and ever since the first week of uni, my favourite society (and the one I spend most time with) is Quiz Society. I’ve been both the competitions convenor and the president in my time at Warwick, and have enjoyed every minute. For me, being in a society was the best way to make friends because we all had at least one common interest that we could bond over, and it really helped me to settle in at uni.

I’ve been (relatively) quiet about quizzing on the blog recently, and a lot of that is due to keeping my place on the 2018 University Challenge team under wraps. Way back in November, I did a paper test and was called back for an interview which decided the final Warwick team. After months of weekly practice, we found out we’d been chosen for the televised series, and went up to Salford for the filming.

We’re appearing on this evening’s episode – it’s the first episode of the new series, and I’m excited to see myself and my friends on TV. It’ll be interesting to hear all of the questions again and see what I hadn’t noticed while sitting behind a big plaque with my name on it. It feels like a long time ago that we filmed it, but I’m sure all the memories will come flooding back when I watch it.

In my time at uni, I’ve made a lot of friends who’ve been on University Challenge – both from Warwick and from further afield through off-screen quiz tournaments. I’ve been dreaming of getting onto UC since I was still in school, so for it to happen in my final year of uni was a really nice way to round off my education and to tick one more thing off the bucket list.

We’ve got not one but two mascots with us on the show – they’re borrowed from my friend, Marissa and are called Mr and Mrs Mallard. They represent Warwick’s large duck population (we’re currently ranked 5 in the UK for duck density) and always have to be in a pair. One thing that we noticed just before filming was that our average age is 22, so our mascots are also our bingo call! We’d also thought about having a cabbage for a mascot as a reference to the Undertones’ song , which contains the lines:

“He thinks that I’m a cabbage, ‘cause I hate University Challenge”

Tonight’s episode will be airing at 20:30 on BBC2 – don’t worry if you can’t watch it at the time, it’ll be on iPlayer and is usually uploaded to Youtube for international viewers. 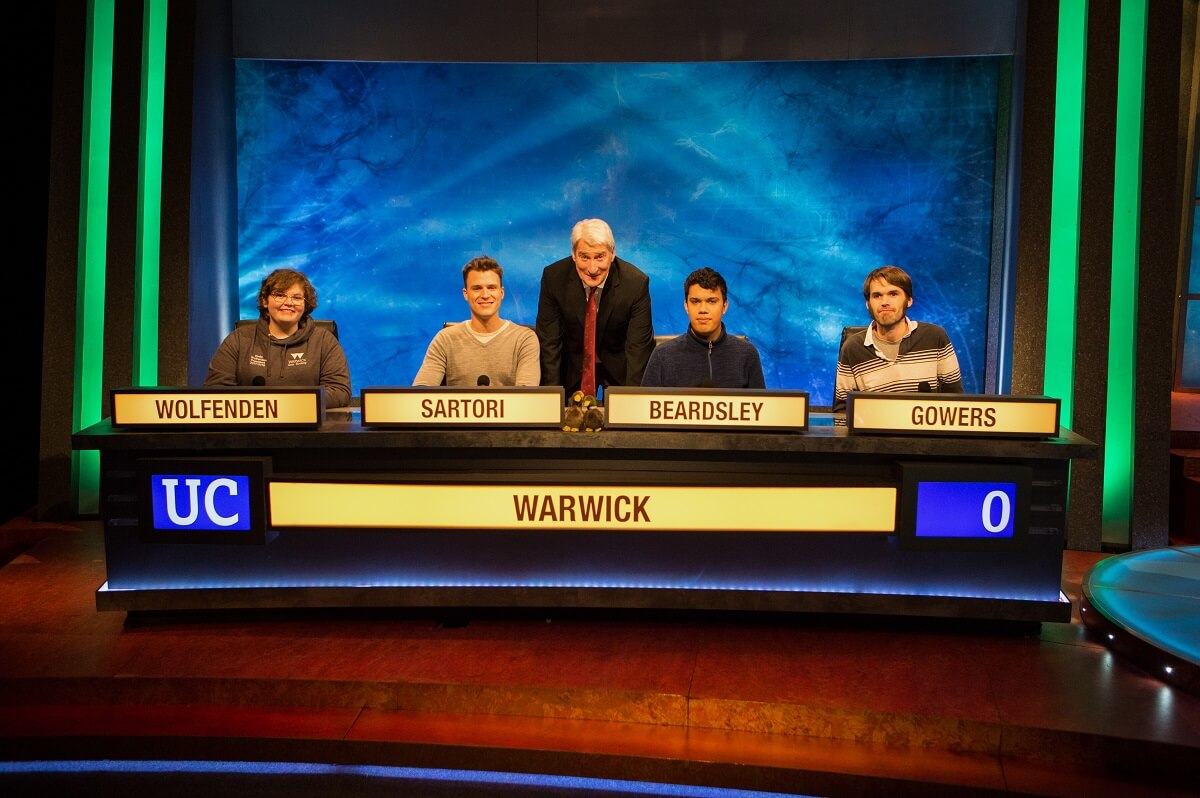