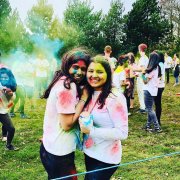 Before coming to university something that concerned me was the pressure to drink. I had the sterotypical view that students get drunk all the time and there was a culture built on drinking but this is not the case.

I think it is probably important to tell you I am not teetotal; I do drink but I don’t like getting drunk and only tend to have one alcoholic drink and I will often opt for a soft drink. This is totally fine and you should never feel pressurised to drink.

At Warwick, there are over 250 Sports clubs and societies (groups of people who are interested in the same thing such as Craft society) and although most of these societies have socials you do not have to drink as socials. Most societies have a social sec and you can tell them that you simply do not want to drink and they will be totally fine about it. Of course some people still have the conception that drinking is the only way to have fun but don’t believe this.

I have often still gone to events but simply chosen a soft drink. Also when your flat do pre-drinks before going out somewhere you can still be involved simply without drinking. Never feel scared to refuse to drink. This can sometimes be a bit awkward the first time but people who are your friends will understand and university is a time to learn to stand up for yourself so even if someone is pushy just say No. You can still play drinking games with lemonade!

Something I liked about Warwick is that they recognised not all activities need to involve alcohol. In Welcome Week you can create your personal timetable where you select different activities to attend. Each of the activities let you know if alcohol is involved or if there will be alcohol served at the venue. I personally opted to do activities which were not centred around alcohol but I was still happy for others to drink so I did not mind going to venues that served alcohol.

At Warwick, there is something called circling which is where a society hosts/ play drinking games. You can still attend circling even if you do not drink however I personally chose to avoid them as I felt that I wouldn’t find it that fun. In some scenarios where people say go on have more or your no fun but this is more of a reflection on them than you. Your friends will often not be bothered.

At Warwick there are 30,000 students so you are not going to be the only one who either does not want to drink or doesn’t because of religious or cultural reasons. I found that many of my friends often prefer to have an occasional drink but are not bothered about whether I drink or not.

Overall, I would say do not worry about not wanting to drink alcohol just be yourself!

If you want to talk to me about this directly feel free to message me on the ask a blogger section.