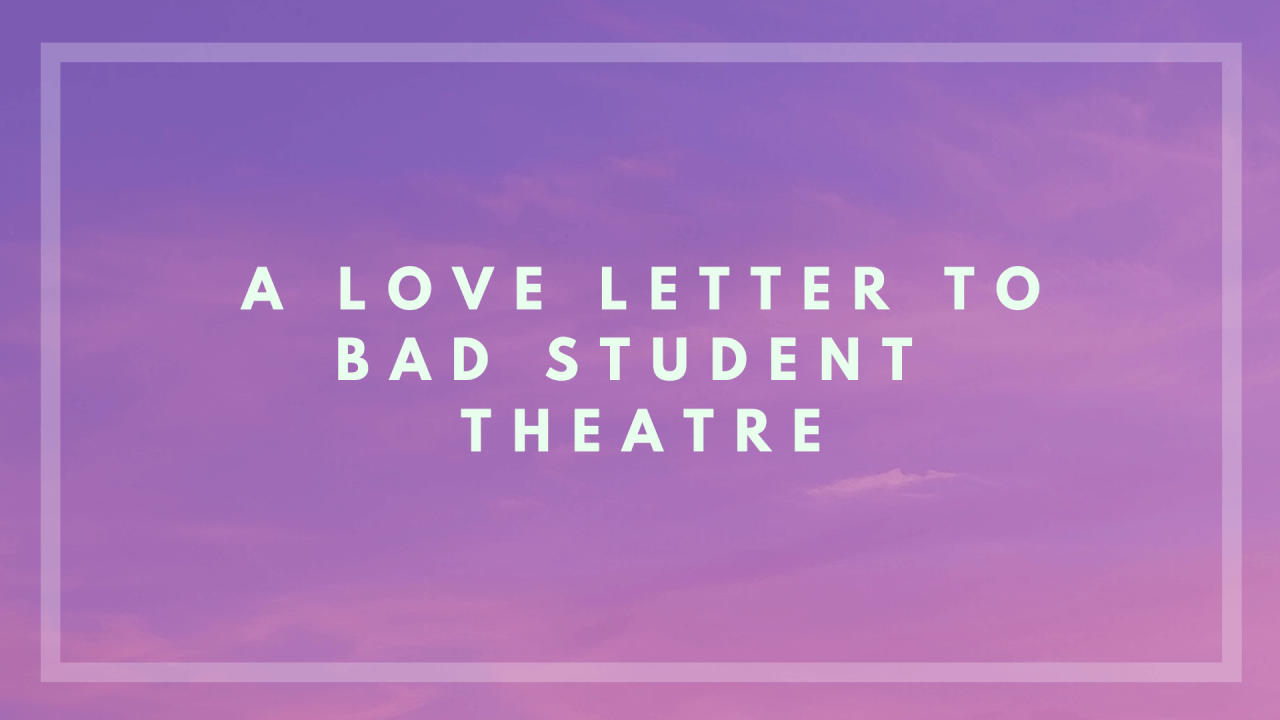 On many of the recent walks, pub visits and picnics in the park, me and my friends have found ourselves reminiscing about the student drama shows from the last few years. Interestingly, the shows that take up the majority of these conversations have not been the very best ones, but instead the ones that were a little bit rubbish. Some of these were too long, some hilariously cringy, and others just disasters from the second they started. From these conversations, I’ve realised that the shows I actually miss this year haven’t been the good ones, but the bad ones. When online theatre is bad, you can just switch off or press mute and ignore it completely, but with bad in-person theatre you’re stuck sitting through it, meaning you get to see the strange characterisation or something go wrong part-way through.

My personal favourite thing about bad student theatre is the jokes and memes that circulate after the shows, as an oddly-spoken line or strange character choice gets copied and mimicked until it takes on a life of its own. There are sentences and actions and songs from shows I saw in my first year that still make me and my friends laugh nowadays, creating these inside jokes shared across many of those in my year and beyond. While this may just seem like a few mean people making fun of a show, these jokes are more than that – they provided a chance for us to bond when we were still getting to know each other in first year, and remind us now of the connections we have formed over the years of watching shows together. These also help us remember the people who have now left Warwick, the situations we were in at the time, and the events happening around each of the shows, like a living memory of interesting theatrical choices. The jokes and memes created from these bad shows also remind us that it’s okay to make fun of ourselves and not take ourselves and our work too seriously, which is an easy trap to fall into.

From a production view, the good thing about bad theatre is that you get to learn a lot from it. While you may watch a good show and think about certain things you would want to use in a show of your own, bad theatre teaches you exactly what you don’t want to do when making your own theatre. This works both from the audience point of view and from the production team. As an audience member, I have seen many things that don’t work in shows which I have been able to make a note of and apply to my own performances when I had the opportunity. Seeing these also enabled me to improve my critical thinking skills as I would think through why a certain element didn’t work, making me more aware of how theatre is put together successfully. This has gone on to help me in various class assignments, especially in the critical reviews of my own work I’ve written throughout my three years. From a production point of view, I have learnt a lot more from the bad shows I’ve been involved in than the good ones. For example, I learnt much more about producing from being an assistant producer on a small-scale show where everything seemed to go wrong from the very start, than being an assistant-producer on an Arts Centre show that was mostly smooth sailing. Knowing what not to do is equally, if not more, important than knowing what to do. Without bad student theatre, I would never have learnt these lessons that I could apply to my assessments and society shows, showing the importance of seeing bad theatre.

One of the things I miss the most about pre-pandemic life is returning to my house or a friend’s house after a bad student show and talking and laughing about our thoughts over some snacks and a drink. There is so much pressure to always be making something amazing and ground-breaking, but there is just as much value in making something a bit rubbish, especially at University where normal show pressures like funding and ticket sales are reduced. There are definitely some amazing shows that get made here at Warwick, and I also love discussing how much I enjoyed those over snacks and drinks. However, bad student theatre holds a special place in my heart, and I can’t wait until it can resume again.