Firstly, whilst the Chileans speak notoriously fast – approximately 100mph – they also seem to have a habit of (rather unfortunately for me) dropping a lot of their ‘s’ at the end of words. ‘Ds’ also seem to disappear sometimes… What’s more, Chileans use a lot of slang in their everyday conversations and are renowned for their use of the word ‘Po’. I have come to realise that really, it is nothing more than a word filler; arguably their version of pues and can have the meaning of ‘then’ or apparently ‘man’…to be honest I’m not really sure what the exact translation would be- it’s an odd one I must say.

In fact, the longer I am here, the more it is becoming apparent that Chilean is almost an entirely different language…

A little late, but so called for

A few essentials: Bacán (cool, great); ¿Cachai? (you get me? This is used at the end of nearly every sentence); copete (an alcoholic drink); huevón (this has a hundred different meanings depending on the context and tone, however it is most commonly used as a form of ‘mate/friend’, but can also mean ‘jerk’, someone you don’t know, and ‘nerd’ I think…); carrete (party- the verb being ‘carretear’); chico (small); al tiro (right away); plata (money); gringo/a (a foreign person); pololo (boyfriend or girlfriend), pololear (to go out with someone- my personal favourite), pucha (damn).

So as my Chilean friends would repeatedly remind me, I really chose the best place to improve my Spanish, right? A little challenging it may be, yes; however, I wouldn’t have it any other way.

Although Santiago has the most extensive metro system in Latin America – don’t get the metro in rush hour…EVER. I thought the London underground was crazy at peak times, but Santiago’s metro takes rush hour to a whole new level. One day, after an afternoon of shopping at one of South America’s biggest shopping centres, Costanera (a must visit for shopaholics like myself) my friend and I made the mistake of travelling on one of the most popular metro lines at rush hour. After about 10 trains passed us, which were so full that it was physically impossible for anyone to get on or off, we managed to somehow squeeze onto a train where we were nearly suffocated whilst trying to protect our bags of food shopping, desperately hoping our bag of tomatoes wouldn’t purify into salsa. Especially when summer was creeping closer, with temperatures (already) of over 30 degrees Celsius, even in the middle of spring, the metro experience was definitely my least favourite part of my day to put it mildly. However, if you are going to be traveling on the metro on a regular basis (I may moan, but it is probably the easiest and cheapest way of making your way around the city) you might want to get yourself a Bip card – Chile’s answer to the London Oyster card.

Talking of transport, I must warn you that a green man in Santiago de Chile does not necessarily mean that the traffic will stop for you. Often, you will find yourself crossing a road, and cars and buses will just continue driving, simply waiting next to you until you are out of the way to continue. Whilst interestingly in Chile you can in fact turn right on a red light when permitted, if you do want to cross at a zebra crossing, however, don’t expect cars to stop for you. I regret to inform you that the only way to do it is by just starting to cross the road whilst the traffic is still coming and pray to God they stop.

One of the common drinks you will see throughout the city on the corner of every street especially as summer approaches, is Mote con huesillo, quite possibly one of the most bizarre drinks I have ever come across. Made from wheat and peaches and often sold in street stands or vendor carts, it consists of a sweet liquid made with dried peaches (huesillo) cooked in sugar, water and cinnamon, and then once cooled, mixed with fresh cooked husked wheat (mote). 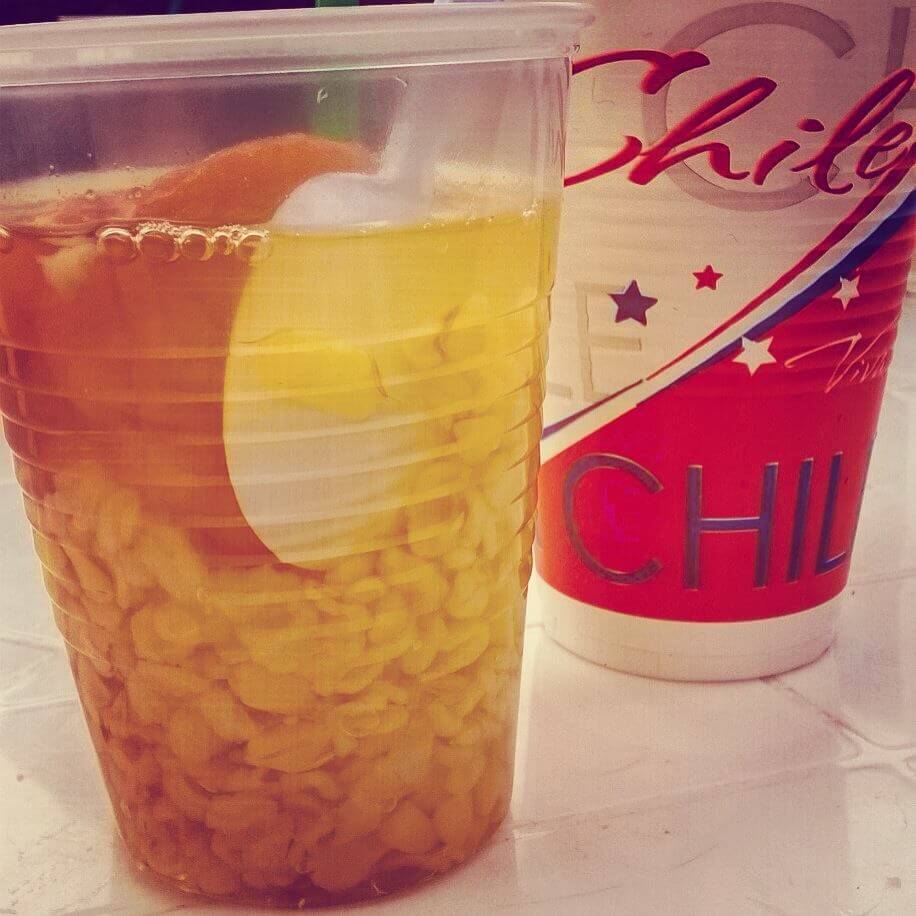 However, when it comes to alcoholic beverages in Chile, Pisco is their thing. Whether in the form of a Piscola or Pisco Sour, Pisco itself is pretty strong, smells a little like dessert wine and is relatively cheap. A Terremoto on the other hand, is also an iconic Chilean drink literally translated meaning ‘earthquake.’ I can assure you that anyone who has tried this drink certainly knows why…a combination of Pipeño (a type of sweet fermented wine) and a clump of pineapple ice-cream (the so-called ‘secret ingredient’) which when the wine is added, floats up to the top. Apparently the next round usually contains the same drink though smaller, which is called a replica or ‘aftershock.’

Finally, of course, the existence of café con piernas. This literally translates to ‘coffee with legs.’ These are essentially coffee shops located around Santiago where the waitresses often on a slightly raised platform, serve coffee in miniskirts, heels or other revealing attire to businessmen…in the middle of the day…totally bizarre I know. Needless to say, this is one place I haven’t ventured to.

Firstly, EVERYTHING comes with avocado (or palta as the Chileans say)…well, I say everything – you will probably find a lot of dishes have avocado in them or an option to add avocado. Even McDonalds have adopted their menu to accommodate the Chilean need for avocado to accompany that Big Mac.

When taking your seat at a restaurant in Santiago, you will find you are immediately presented with a complementary platter of bread and pebre. Pebre is a Chilean condiment made of coriander, chopped onion, peppers, grated tomato and a pinch of salt ‘a gusto.’ However, I must warn you, depending on where you go, you will find some pebre a lot spicier than others…don’t say I didn’t warn you! 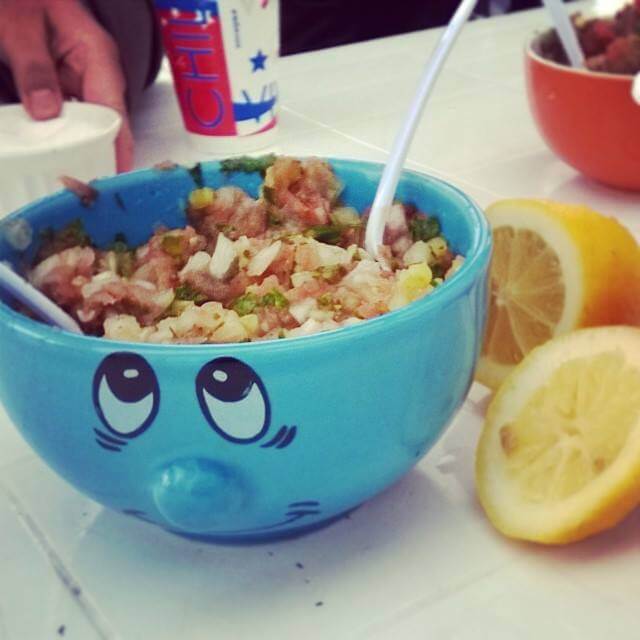 Empanadas and Choripanes are also pretty staple elements of the regular Chilean on-the-go diet. An empanada is a stuffed bread or pastry (baked or fried) and is pretty common all across Latin America. In Chile, however, the most traditional empanada filling is called pino; a seasoned mixture of ground beef, onions, raisins, black olives, and hard boiled eggs. A Choripan, on the other hand, is something you will commonly be invited to eat as part of an asado (barbeque) in Chile. Normally served as an appetizer, a Choripan, as you have probably guessed from the name, is essentially a grilled chorizo (sausage) and a pan (crusty bread) such as a marraqueta or baguette, usually served either on its own or with aji (hot sauce) and pebre. I can assure you neither one of these two dishes do anything for your waistline, but are definitely a must try. 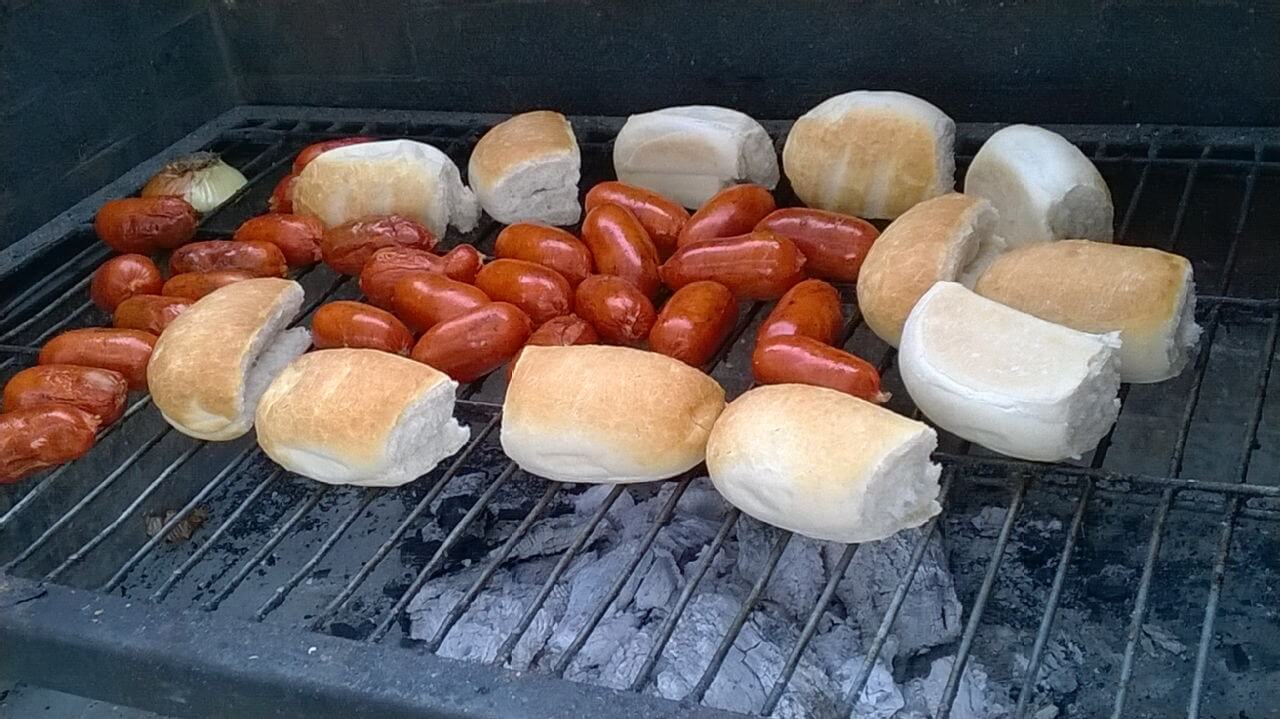 A completo is not only something you are pretty much guaranteed to encounter on every street corner, but is the Chilean version of a hot dog. I must admit: although I have only ever had one, it normally contains ingredients such as chopped tomatoes, avocados (naturally), mayonnaise, sauerkraut, chili, green sauce and cheese. Depending on the specific combination of ingredients you choose, the main variations of completo include completo tradicional, italiano, dinámico, a la pobre and tomate mayo.

Desert-wise, this one is easy. Dulce de leche (or Manjar), a sort of sweet caramel made by slowly heating sweetened milk until it thickens and changes colour, is simply put on anything and everything. 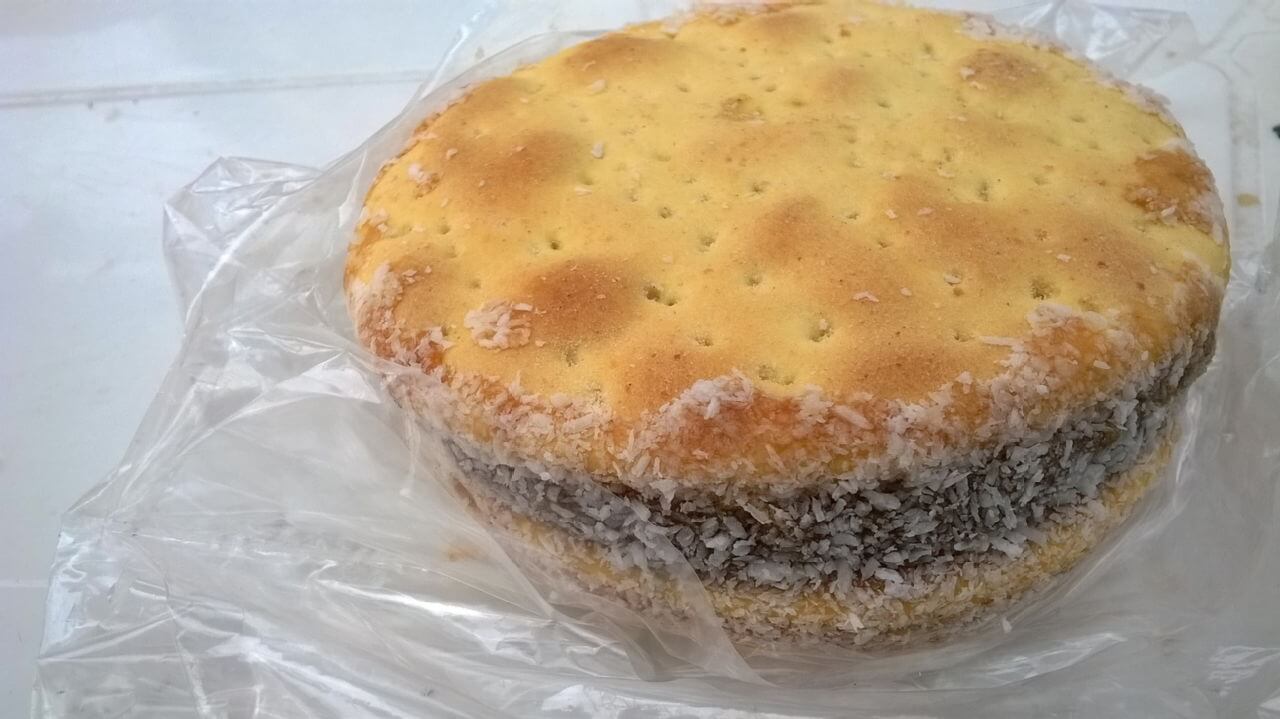 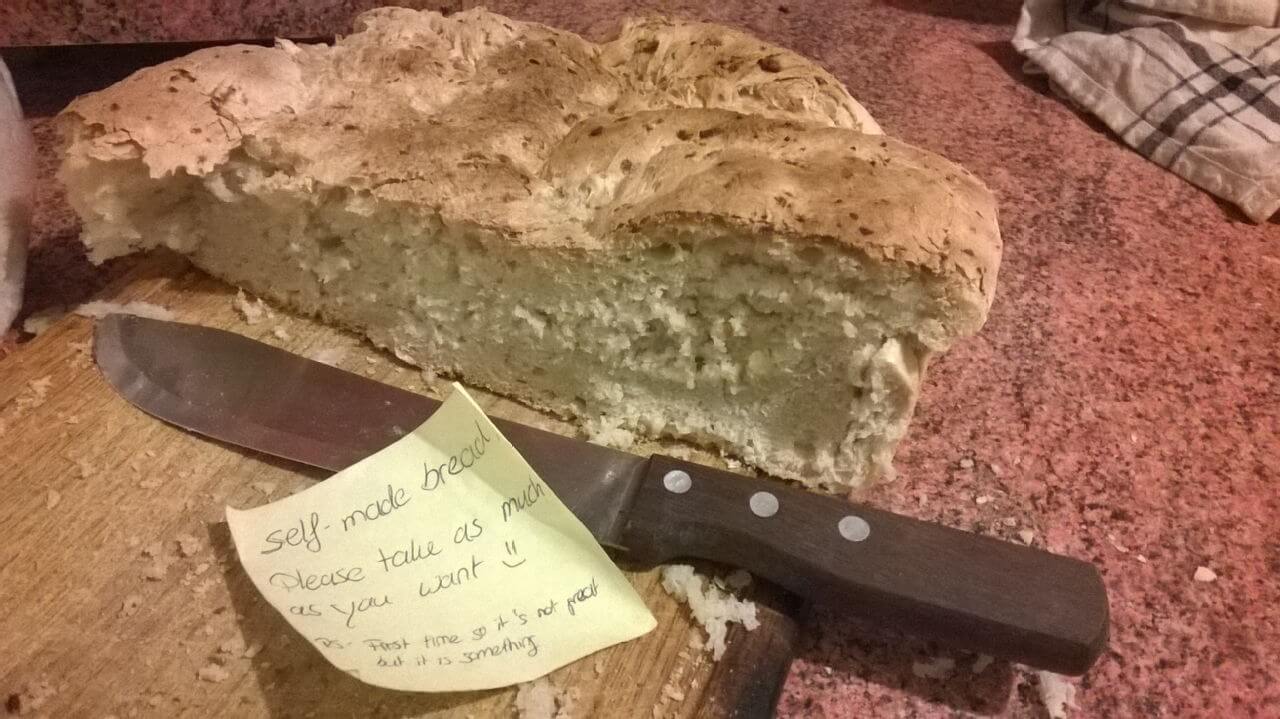 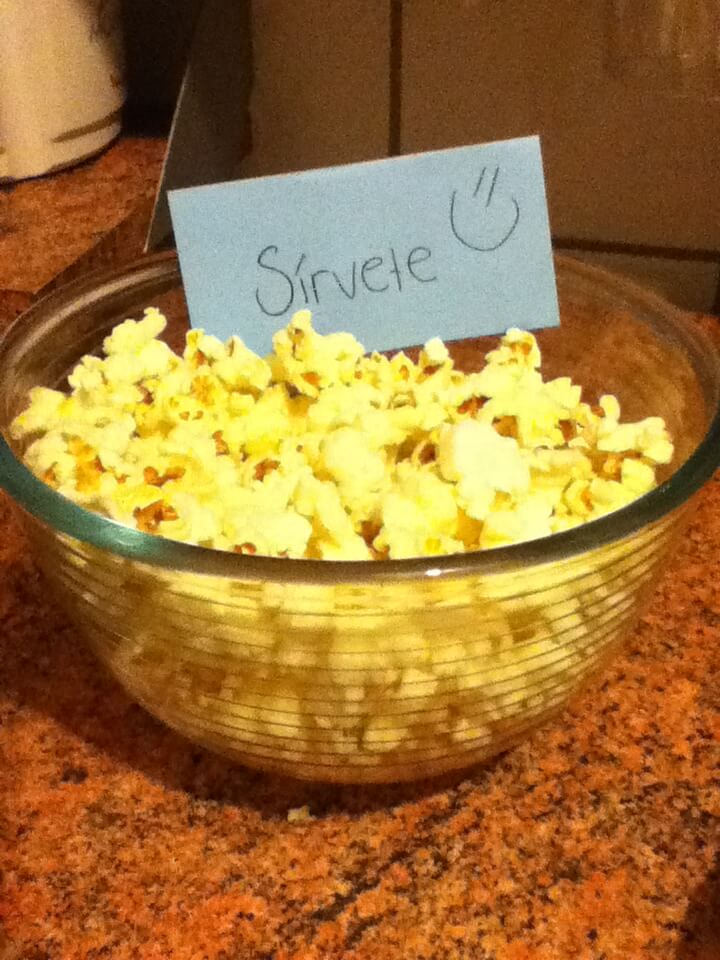