I must admit that it feel as if it has been quite a while since my last post. So first of all apologies for that! I really haven’t been on top form lately have I? However, I suppose quite a lot has been happening recently; another visitor from England (I know- Siena’s becoming quite the holiday hotspot amongst British undergraduates for some reason…), various day trips to nearby Tuscan towns, seemingly walking into Palio preparations by accident and getting side-tracked for a good while almost every day, and quite a lot of lectures. 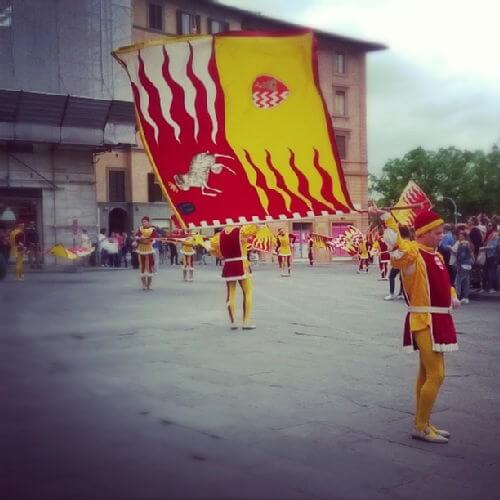 En route to the supermarket…the contrada of the Valdimontone (rampant ram) in full swing…yes, the Palio isn’t until July.

In fact, having just had 6 hours of lectures IN Italian today, followed by an exhausting hour and a half workout at the gym, before cooking myself some dinner all in the 27 degrees Celsius heat that has suddenly descended upon Siena this week, I am feeling rather shattered! In fact, I’ve not even been going out that much lately as slowly slowly I seem to be wholeheartedly embracing Italian ‘nonna life’ as we call it.

However, enough rambling. As I mentioned, last week I found myself with another visitor… 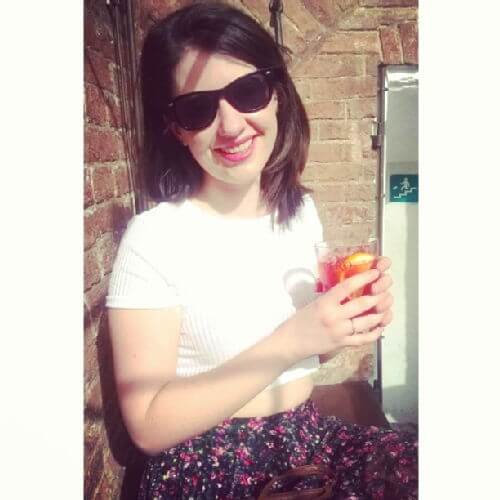 Yes, with three and a half days in Tuscany before flying home to finish the last few exams of her undergraduate degree before graduating, Lucy managed to squeeze in a visit to find out what all this year-abroad lark was all about. 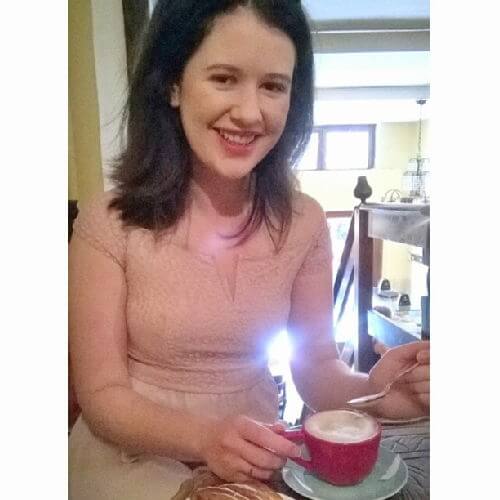 Lucy’s first authentic Italian cappuccino…I think I may have finally converted her. Success!

After a relaxing afternoon spent catching up on practically a year spent apart whilst soaking up the beautiful Sienese sun (which finally returned to Siena along with souring temperatures after a rather drizzly previous week of rain) and a delicious home cooked dinner, the following day we were raring to go.

Renowned for its medieval architecture, dozens of tower houses, its hilltop setting, and encircling walls forming an impressive skyline, the medieval hill-town of San Gimignano was one that despite continuously being recommended to me (including by one of my Italian lecturers here) I still hadn’t had the chance to visit.

Until last week that is! 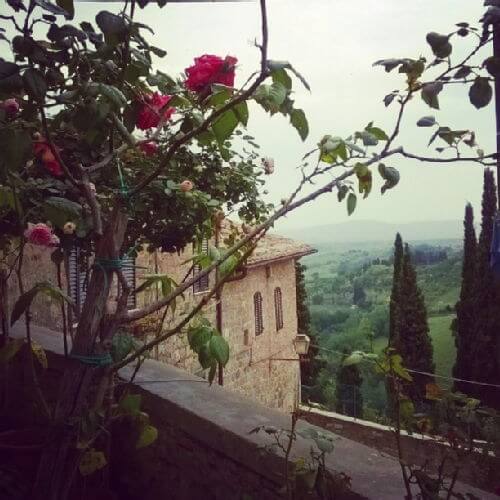 In fact, not only can San Gimignano be seen for miles from the surrounding towns and countryside, but its medieval skyscrapers of Gothic and Romanesque style have supposedly been rather influential to even the iconic skyscrapers of New York City. 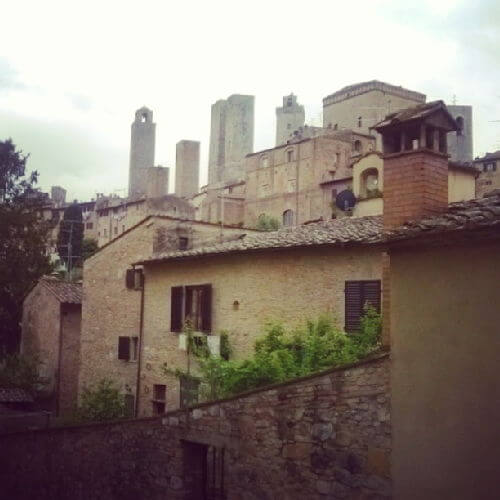 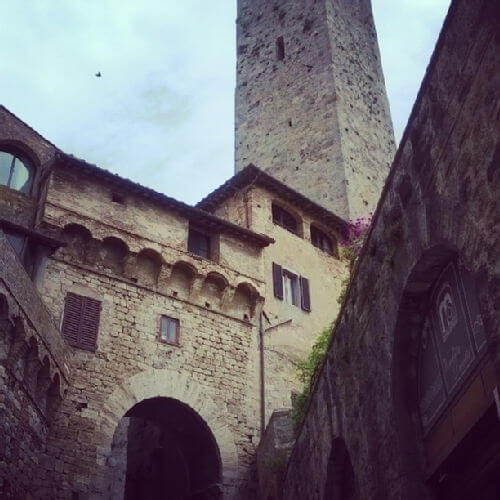 Oh and I forgot to mention, it is also home of the best ice-cream in the world….

No I’m actually serious. It genuinely has been awarded the ‘best ice-cream in the world award.’ No joke.

Despite my rule of always going for Pistachio and Lemon when it comes to Italian gelato, I felt that on this occasion, faced with flavours ranging from the likes of ‘Gorgonzola and Walnuts’, to flavours such as ‘Blackberries and Lavender’, I needed to mix things up a little. I must admit upon entering Gelateria Dondoli, the experience was all rather stressful. Unsurprisingly overflowing with tourists in their masses, and unable to make decisions very well at the best of times, I eventually (some-what dubious about the whole thing) chose a little coppetta of pear and Michelle (a combination of Sicilian Avola almond with bitter orange peels, orange sauce, honey and saffron Senese cantuccini biscuits)… Impressive huh? A mix of ‘sophistication and sweetness’ they say, dedicated to none other but…erm the American president’s wife, Michelle Obama. Ok, tad random.

I hate to say it but yes. I wasn’t disappointed. I think it actually was probably the best ice-cream I’ve had, therefore potentially pushing Argentina’s Freddo into second place…eek.

Ok, I think ice cream has dominated rather enough of this blog post. Moving on! 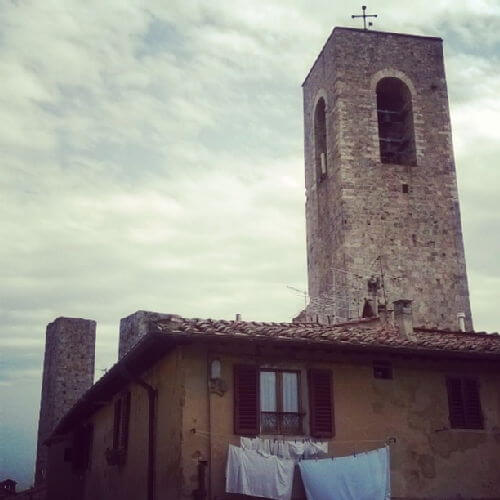 Roaming the streets of San Gimignano 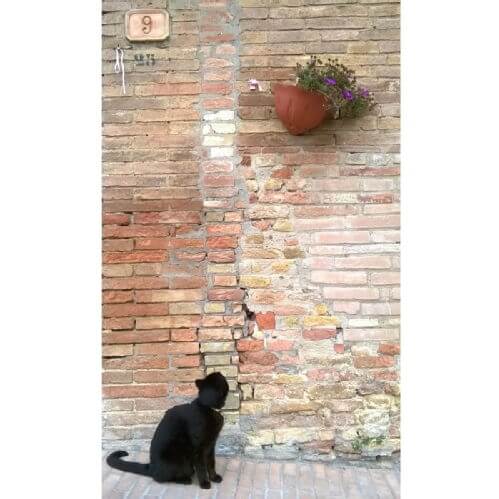 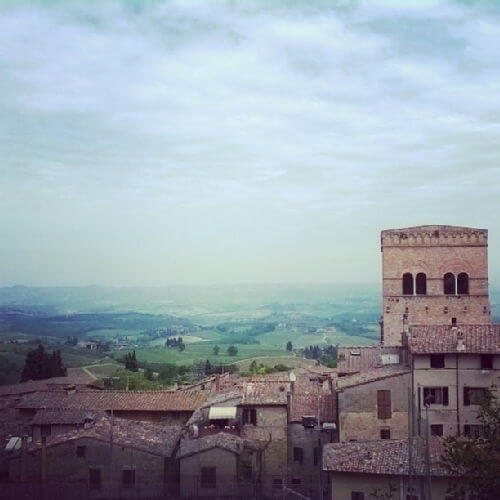 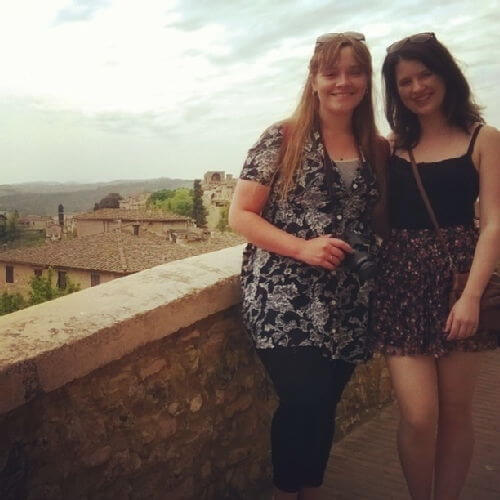 After a day spent wondering the quaint streets of San Gimignano, back to Siena we headed in order for Lucy to experience her first authentic Italian aperitivo before heading to one of our favourite bars Cacio e Pere for a night of live Italian music (genuinely so much more effective than tedious translation exercises I swear, especially when translating the more amusing lyrics to Lucy)… 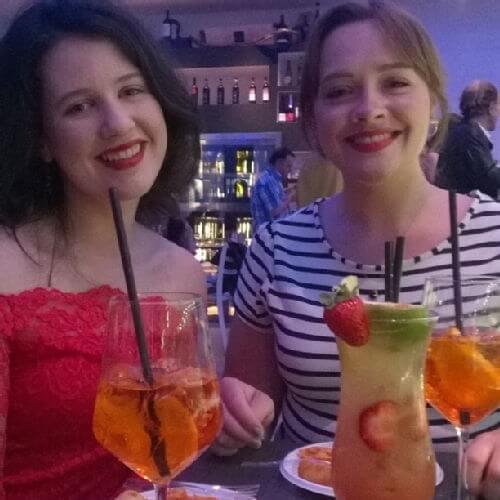 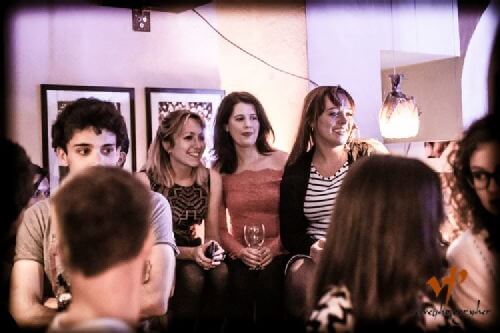 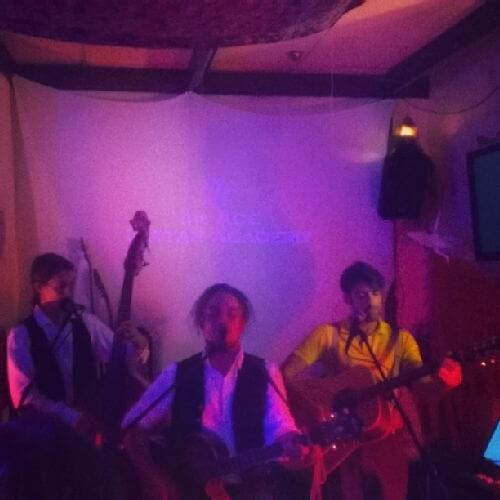 La Gerberette, a Sienese band whose genre I can only describe as a rather unusual mix of rock, folk, acoustic and singer-songwriter…much recommended and definitely worth a listen!

After a certainly entertaining night, the following (and last full) day of Lucy’s stay was spent doing the sights of Siena. 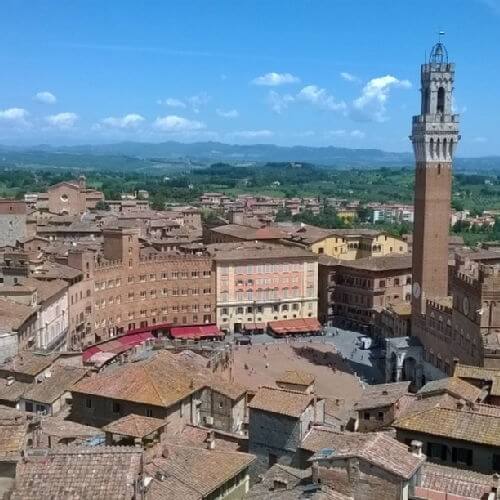 After all, it is the best Tuscan town of them all 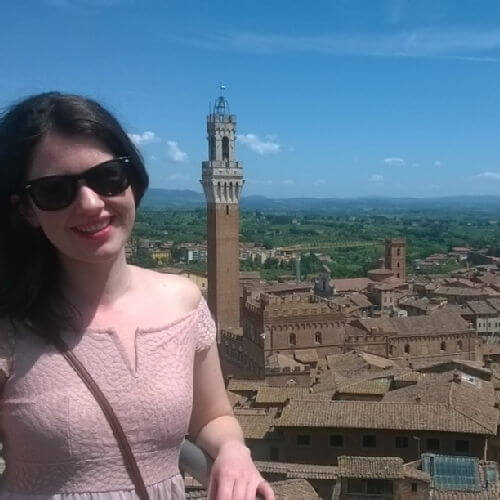 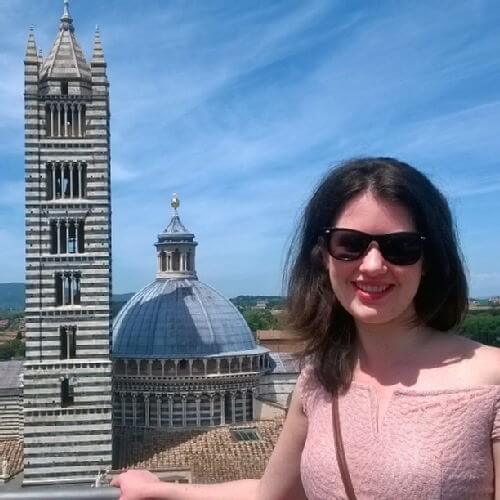 Can never get enough of this stunning view… 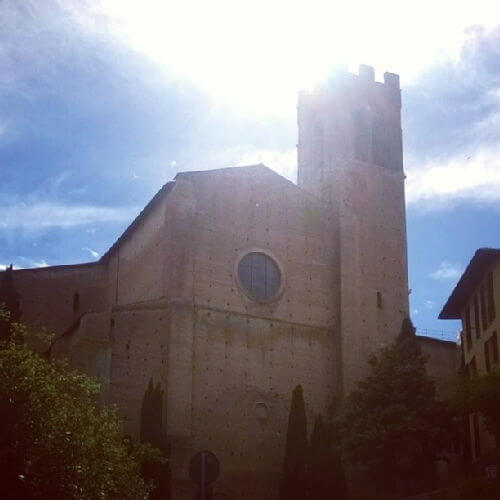 We also stopped in and paid a little visit to Saint Catherine’s Sanctuary, the Benincasa family home, where Catherine of Siena was born, and which has been a shrine to Saint Catherine since the 15th century. On the subject of which, I should probably point out that Santa Caterina da Siena, together with Saint Francis of Assisi, is one of the two patron saints of Italy, and therefore unsurprisingly a very important figure to the people of Siena. In fact a gilt bust of bronze containing La Sacra Testa (the sacred head of Santa Caterina) is entombed in the Basilica of San Domenico, having been brought home to Siena in 1383, from her burial place in Rome. Dedicated in her honour, the church represents the Gothic Cistercian style of architecture and houses artwork pertaining to the life of Catherine, including the only painting made during her lifetime, a fresco by Sienese painter Andrea Vanni. 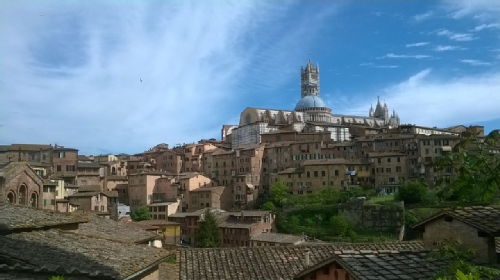 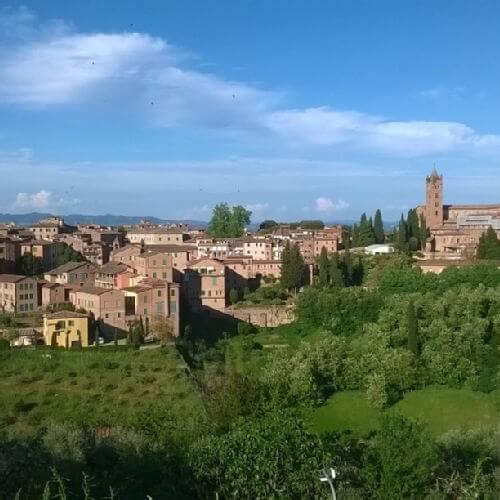 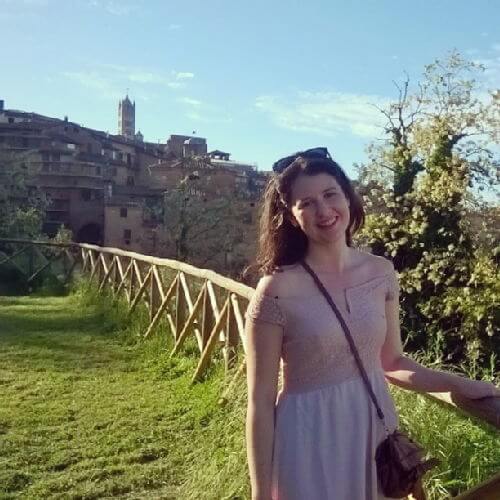 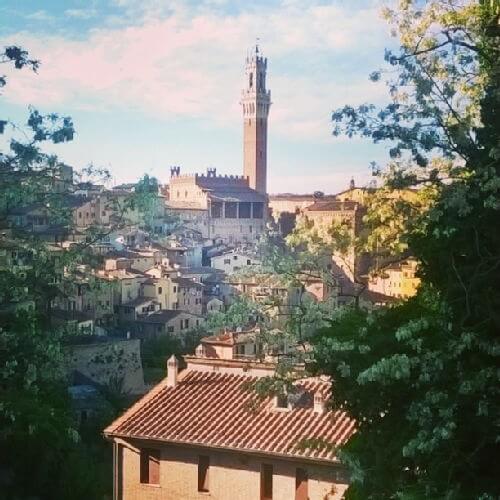 Yes, I live in a rather beautiful place

Finishing the trip off with a truly authentic dish of antipasto followed by Pici Cacio e Pepe alla Senese at a local osteria, I think it is fair to say, Lucy’s Sienese ‘study break’ certainly provided her with an authentic slice of Sienese life.