4 plays that EVERYONE should watch – OurWarwick 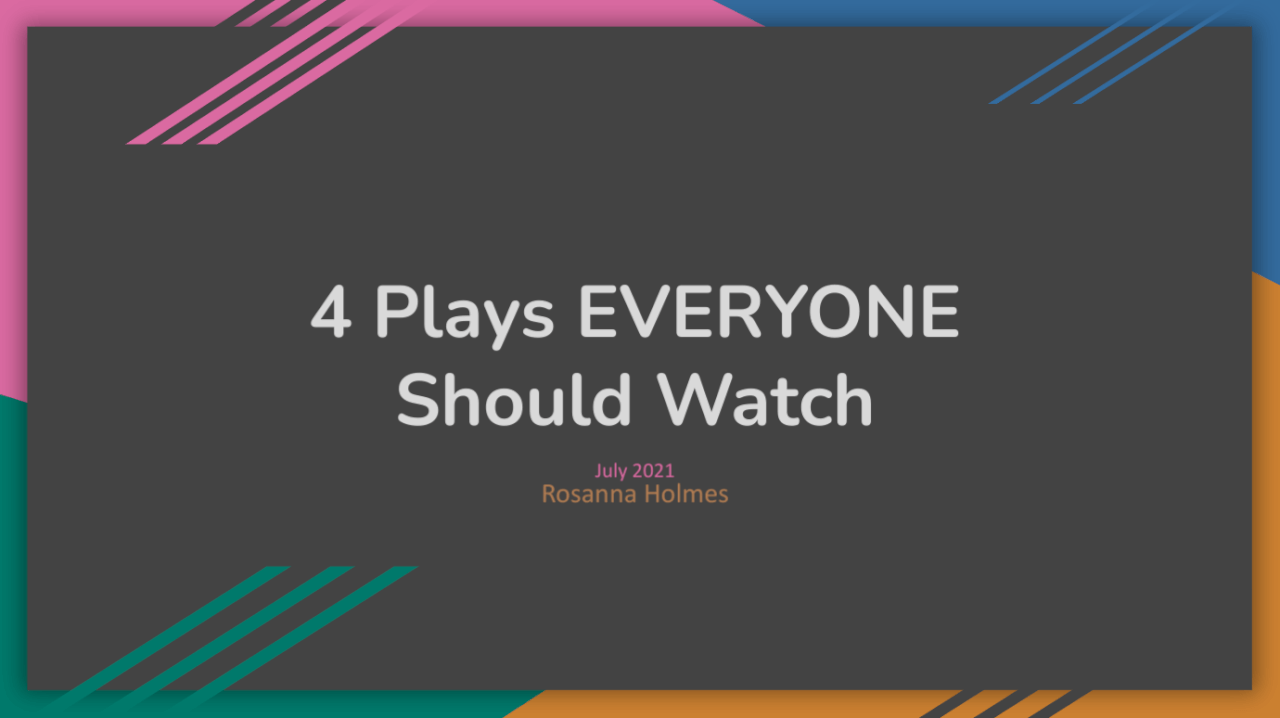 4 plays that EVERYONE should watch

Hey everyone! Now I’m aware that theatre is seen as a pretty niche interest, but believe me when I say there is a play out there for everyone! The best thing about my degree is watching plays I would never have come across otherwise, and while some are the very opposite of mainstream, I’ve discovered some which I believe can be enjoyed by anyone! Below, I’ve summarised each of the productions, and listed where you can watch them.

The Woman in Black

The Woman in Black was adapted into a play in 1987 by Steven Mallatratt, and is one of the longest running plays in the Westend. I was lucky enough to see the production in 2017 at it’s home, The Fortune Theatre. I had never seen a horror play before, or even knew they existed. Nevertheless I was genuinely and pleasantly terrified by the production’s use of dark atmosphere, surround sound, and a woman running manically through the audience whilst screaming. It’s a live experience that brings together conventional theatre and the concept of haunted house, with a gripping narrative and, surprisingly, some occasional comic relief! I would definitely recommend this for horror fans; you should go just to appreciate the wonders that modern theatre technology can create.

“I have a horrible feeling I am a greedy, perverted, selfish, apathetic, cynical, depraved, morally bankrupt woman who cant even call herself a feminist.”– Fleabag

Fleabag is wonderfully heartwarming and heartbreaking at the same time. If you’ve watched the TV series, you’ll know how brutally honest Phoebe Waller-Bridge is about love, family, grief and loneliness. The original one-woman play is a must-see if you enjoyed the series, but be prepared to go from laughing to crying in the blink of a tear-stained eye. It discusses a lot of things women experience in everyday life, and touches on thoughts and feelings which are often overlooked. A NTlive recording is available on Prime, and at under 80 minutes it’s shorter than most plays.

Out of the thousands of Hamlet productions throughout history, the Royal Shakespeare Company’s 2015 production is by far my favourite. It stars Paapa Essiedu (known for I May Destroy You). Aged just 25, he gives us a young, emotional, and lively Hamlet which a young audience can massively relate to, even though the language is barely altered. The aesthetic and atmosphere is heavily influenced by african flavours, and the mostly black ensemble sets this production apart from the white-dominated stages at the Royal Shakespeare Company. This new and refreshed look on the most famous play of all time was praised by critics worldwide.

If you don’t wish to sit through the whole three hours, you can watch Paapa Essiedu’s “To be or not to be” speech here:

Written by closeted dramatist Terence Rattigan in the 50s, The Deep Blue Sea follows a day in the life of Hester Collyer, a woman caught on the edge and between her ex-husband and new young lover. The play is emotionally beautiful; Hester learns to live for herself rather than for other people, and recognises the facade of an idyllic romance hiding post-war realism. The National Theatre’s 2016 production stars the late and great Helen McCrory, one of my personal idols, who delivers Hester’s monologues in a raw and captivating manner. I would highly recommend this production for anyone interested in writing, or anyone who enjoys emotional/psychological dramas.

Get a taste of the production here: