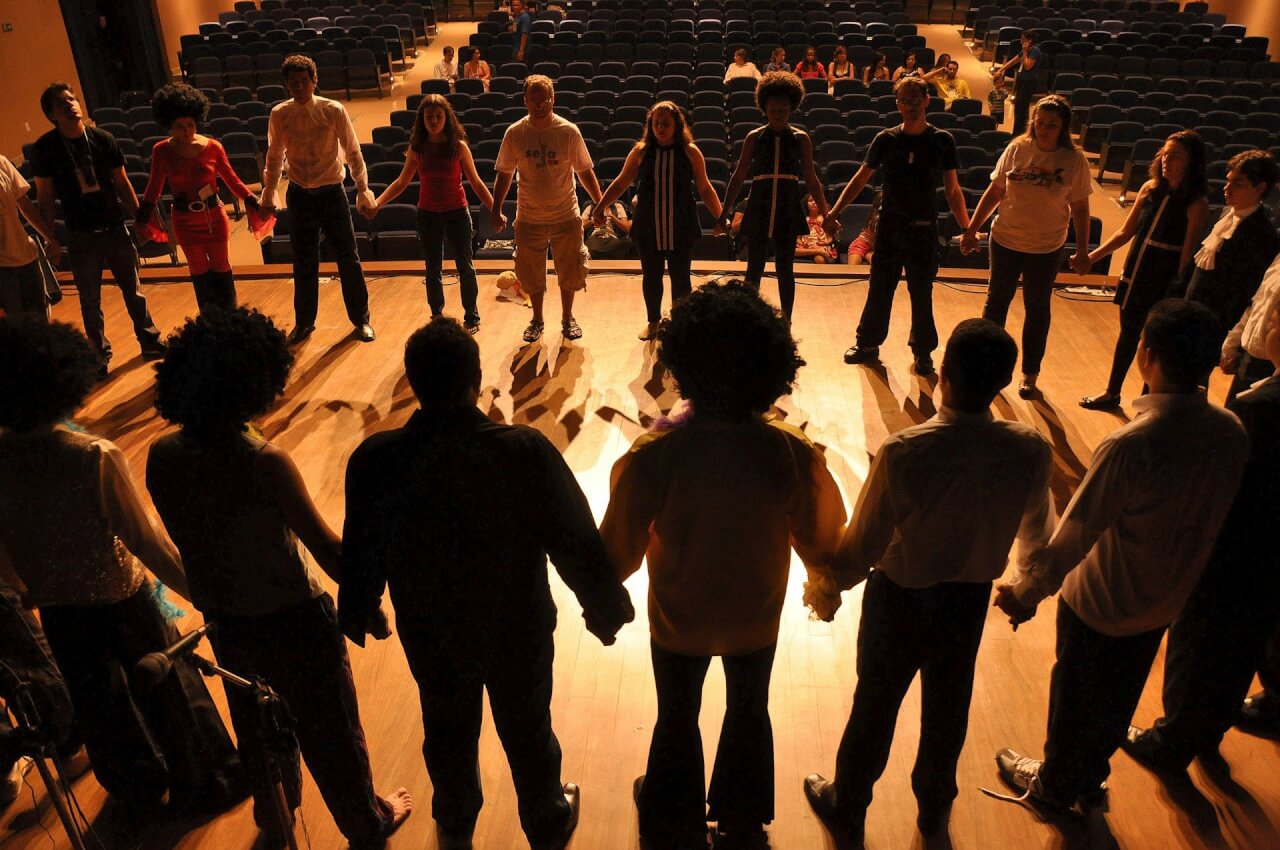 I can hardly believe that this time last year I was about to arrive at Warwick for the first time & that now I’m about to start my 2nd year! Time flies. Having talked quite a lot in previous posts about my experiences with various societies, today I wanted to give you all a little more insight into my course of study…

Although modules can vary from year to year, in my first year all modules were core and compulsory, of which there were 4. The idea is that you get a taste of all the different kinds of things you may want to go on to study in more depth, and then in your 2nd/3rd years you can choose options based around these personal interests, or equally, avoid the things you don’t enjoy quite so much!

Introduction To Theatre and Performance Studies

‘Intro,’ as it quickly became known, was a theory-led module. It aimed to give us a grounding in key ideas surrounding the study of ‘theatre’ or ‘performance,’ gradually introducing us to how these are two linked but resolutely separate concepts. Lots of the content here became less overtly ‘theatrical’ and linked up with all kinds of interesting cultural, sociological and political ideas, exploring how the notion of ‘performance’ seeps into all aspects of everyday life. This was the biggest module in terms of number of students, as anyone doing single or joint honours with theatre took it. It had 1 lecture per week which would cover the material for that week and go over the set reading, and then we would also attend a seminar, for which we were divided into 4 small groups; during this we would explore the ideas further with our tutor.  Assessment was split between an essay, a written exam in the summer & a research poster. The poster was one of my favourite assignments throughout last year, partly because we were given a lot of free rein to choose the theme and focus of our work. The brief was a poster entitled ‘performance, identity and X,’ in which we could choose anything we wanted as the ‘X’! I ended up pursuing a really fascinating few weeks of research exploring the ways social media and the internet has affected our presentation of self. Everyone really enjoyed this project, so look out for it  if you’re a Theatre fresher!

This was a practical module and took place on one day a week; we were split into two groups and attended workshops for around 2-3 hours each. We’d pack a lot of work into that time! Through the year, we delved into all kinds of avant-garde modes of performance and approaches to creating new work. In autumn we looked at ‘sound’ and ended up creating sound installations or audio walks, either in fiction or documentary styles. Then we moved on to work with a series of visiting companies and practitioners on ensemble practice; it was really exciting to come into contact with professional artists like this, encountering numerous different methodologies. Around this time, we also attended a festival entitled ‘EMERGE,’ which involved performances by alumni companies as well as some useful panel discussions.  In spring term we did a short yet very intense unit entitled ‘Senses’ which was really abstract and examined sensory performance art before finally moving on to autobiographical performance. The final assessment for the year involved us working in groups to create 20-25 minute pieces drawing on the skills we had developed through the year. We were expected to work independently on this during summer term, meeting a couple of times with a project supervisor, so the responsibility really was ours! But it was worth the hard work in the end, as everyone created some vivid, original responses to the theme of ‘borderlands,’ and it was lovely to watch them all.

This was probably the most difficult module of the year, but funnily enough it was my favourite! It was designed to really challenge us, and develop our analytical and critical skills. At the very start of the year, things were set off by us going to see a show by the company Motionhouse at Warwick Arts Centre (my friend and I were so keen we went twice!) – over the first few weeks in classes, we would very gradually break down the performance into its constituent elements and work through ways of interpreting or analysing them, individually and as a whole. We were also taught so much in these classes about approaches to research & developing a sound argument. Through the year, we looked at plays and performances relating to a variety of topics, including popular entertainment, Victorian melodrama and pantomime, mediation and communicating narratives of trauma. We had one lecture and one seminar per week. I always found the weekly seminars such good fun, and our tutors were lovely! The assessment was entirely essay-based here, a few shorter assignments and then the year culminating in a longer (3000 word) piece of work. I wrote about concepts of memory and history in theatre, linking back to plays we had studied right at the start of the year. It was a tough task as the questions set were difficult but it was a great feeling to produce the final piece of work. PA definitely is the best preparation to continue on successfully to the rest of your degree in the Theatre department!

From Text To Performance

I loved this module! It was predominantly practical, although sometimes incorporated written aspects. As with CPP, we attended one day a week for 2-3 hours, split into two groups. This was the most obviously ‘theatrical’ module, as we usually focused on published plays and ways of realising them in performance. This involved everything from working with text, to carrying out background research on plays such as Hamlet and Spring Awakening and examining different interpretations. We worked in term 1 to create our own short 10 minute performances inspired by some of the material we had studied. Our group combined characters from 3 different plays, placing them in an encounter under 1 setting; we spent ages working on a script, as part of our brief was to only use existing dialogue from each of the plays we were adapting from. This was a considerable challenge, but we thrived on it! In spring, we worked with a visiting professional to explore approaching to directing, ending up producing a ‘director’s pitch’ for a play. Again, this stands out as one of my favourite experiences of last year, and never having put together a production before, it also gave me valuable tips for developing a realistic yet creative vision for a show. Our final assessment involved staging a text/combining two texts into a longer performance. This didn’t have to be restricted to theatre; some groups made short films or immersive exhibitions as opposed to traditional performances. My group looked at the chilling urban fairytale ‘The Pitchfork Disney,’ interlinking it with a Carol Ann Duffy poem. I am moving on to study Dramaturgy as an optional module later this coming academic year, and that is partly thanks to FTTP for inspiring me to explore this kind of work further!